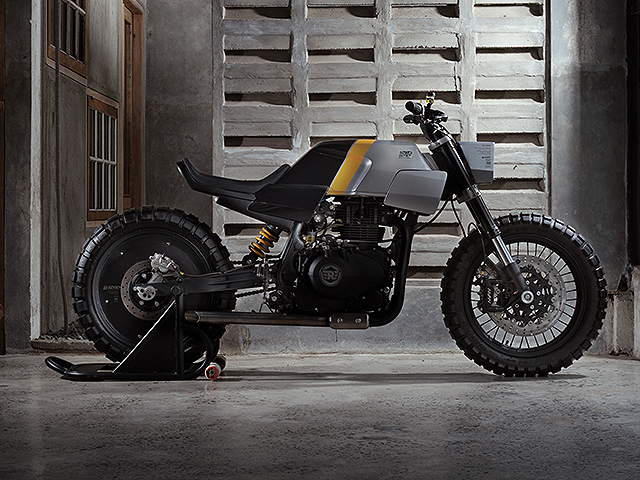 For the past few years motorcycle manufacturers have embraced custom builders and through various competitions have had them give a new look to their latest releases. But even a good idea can start to grow stale and rather than stick to the well-worn path, Indonesia’s Royal Enfield importer turned to a fresh pair of eyes. The result is a RE Himalayan designed and executed by leading architect Julian Palapa; ready to rip up the jammed roads of Jakarta, it’s called .02View. 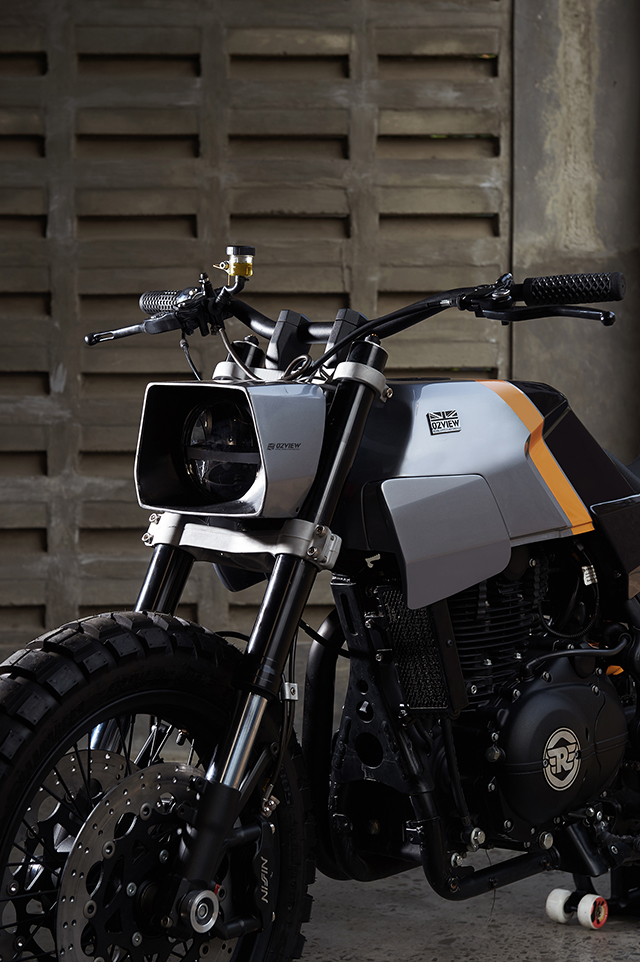 Julian is the founder of the Hello Kilau architecture firm and when he heard about the competition that PT Distributor Motor Indonesia (DMI) was running he was hesitant. The prize was a new Himalayan and the chance to customise the bike for the Indonesia show circuit. But already word was out that the country’s best builders were submitting their proposals. So rather than back out, he submitted his entry like he would a proposal for a new building plan, designs and all.

“When I was on vacation in Amsterdam, a call came from DMI stating that my design passed. I did not expect and was amazed. How come my design was chosen from among the works of the kustom kulture gods in Indonesia?” smiles Julian. But having won the prize and finalised the details with DMI, they gave the architect just 7 months to complete the build and he assembled a team to take on the task. 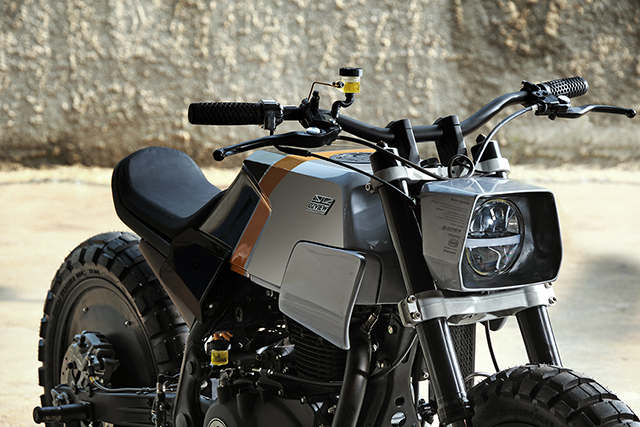 Bringing together his three key elements to building success, structure, function and aesthetics, the process of crafting the RE was the same one Julian adopts in his architecture firm, only this time with the ultimate goal of a ’70s inspired tracker ready to tackle the urban environment. With the bike stripped down, the adventure touring Himalayan’s dimensions were deemed too large for the role. With the team aiming to make the bike not only more compact, but to reduce both the height and the wheelbase.

To help with this the long stock forks are replaced by meatier Showa USD SFF units that required a custom set of triple trees be fabricated to fit the RE neck. To give the bike the sort of matching beef in the braking department, the once single disc setup is now a massive Nissin package complete with dinner plate size drilled and slotted rotors and four-piston calipers each side. While the rear end is just as tough, with an Ohlins rear shock supporting a bulkier swingarm and the braking switched to Brembo. 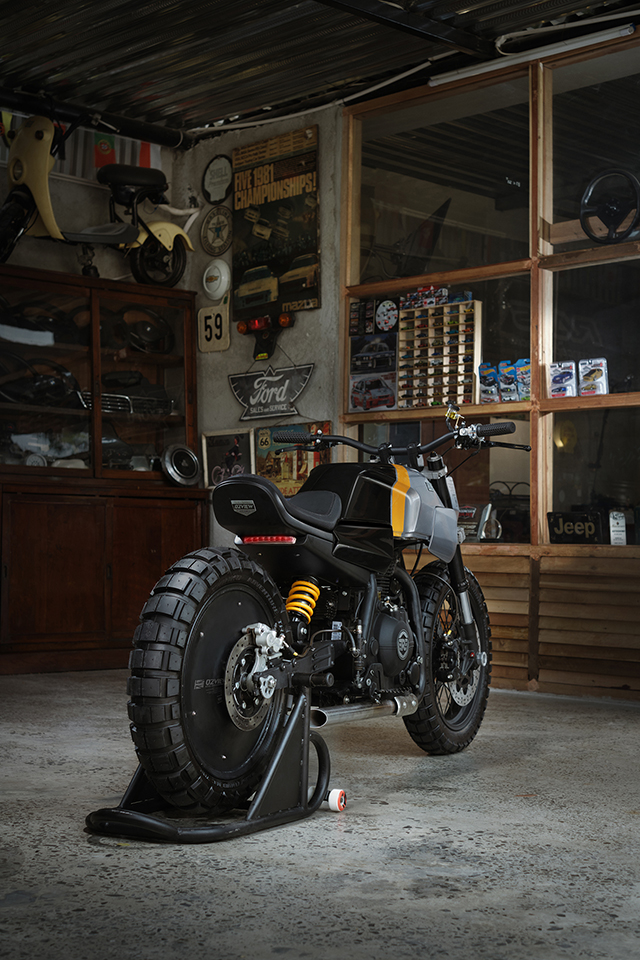 The extra muscle in the smaller package is helped along even further with the fitment of aggressive Shinko E805 rubber. With the solid style rear wheel cover made from galvalume, inspired by Julian’s work in the building industry. “ This material is usually implemented to make canopies, to protect houses or other buildings from rain or sunlight. When compared with other materials, galvalume is classified as more durable and resistant to rust or changes in weather and humidity.” 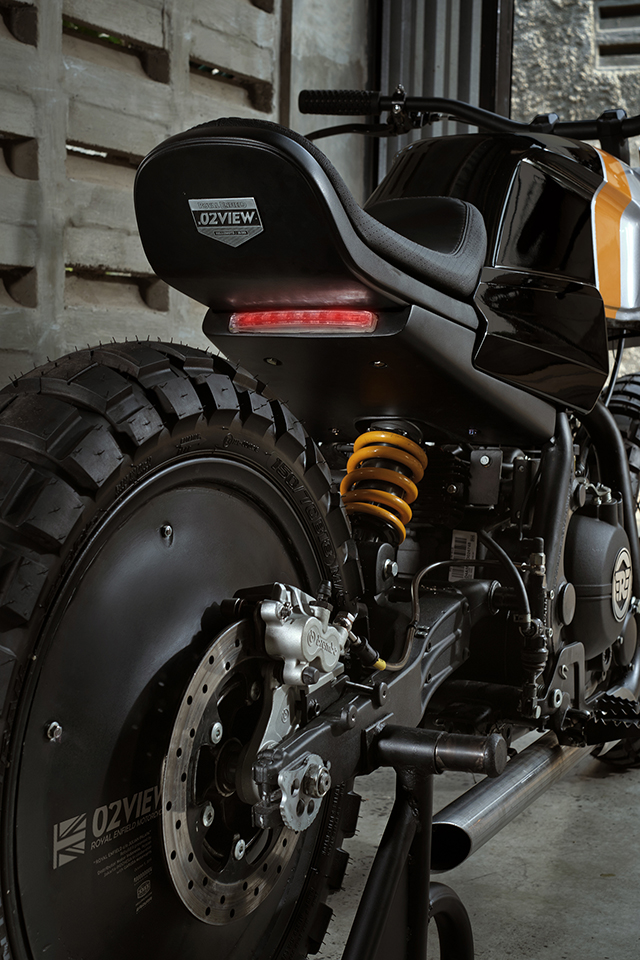 The front of the Himalayan only adds to the brawn with a Daymaker 5in headlight hidden in a boxy, handbuilt shroud. But it is the custom tank that dominants proceedings, flat top with race filler, heavily sculpted sides and squared off winged covers that all add up to a seriously aggressive look. This feature is further enhanced with the simplified and shortened subframe that hides the electronics underneath and sports a single solo seat neatly hanging out over the rear tyre. The RE is now 40mm lower and 80mm shorter, the dimensions enhancing Julian’s desired form and function. 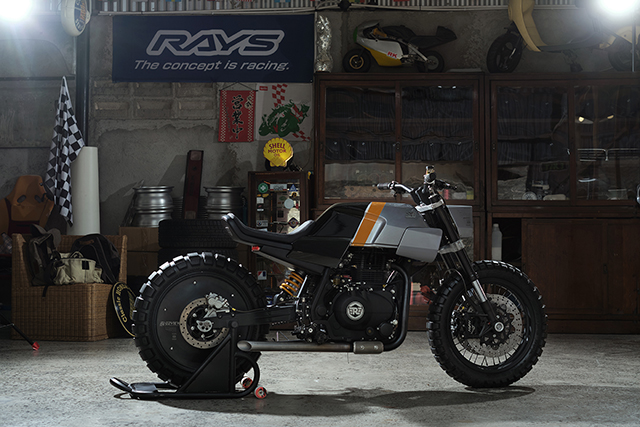 For the colour choice Julian threw things open to a public poll and when the votes were tallied the winning look was the beautifully applied gold, black, and silver. With the build finished out with a set of Pro Taper bars and the exhaust note spiced up thanks to a slash cut tailpipe. The final product looks incredible and hits the Jakarta streets like a sledgehammer. But for the boss of Hello Kilau architecture, it’s the human emotions that the project evokes that determine its true success. “The presence of .02View is not to compete. Not to show who is superior. I only present a new, personal perspective from an architect, in modifying motorcycles.”