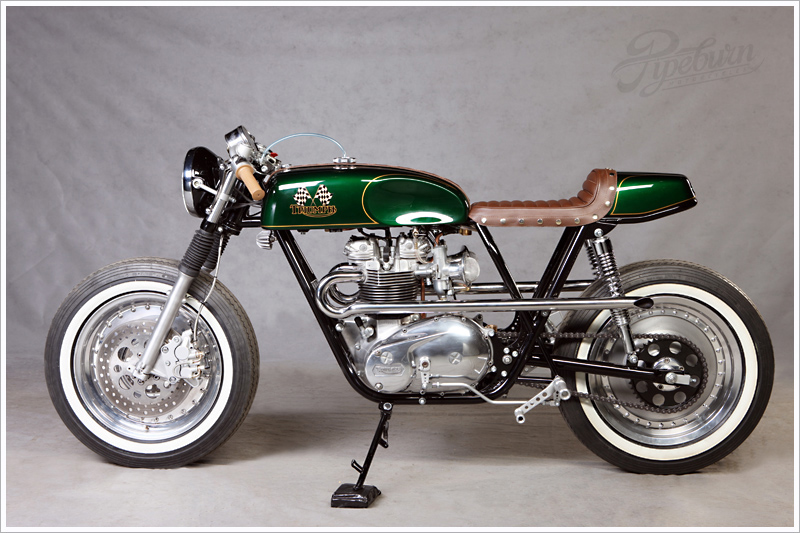 It’s hard to believe its been a year since we featured Yuri Shif Customs (YSC) jaw-dropping creation they called ‘The Machine’. What we love about this builder from Belarus is he is always experimenting with different styles of bikes, and this time it’s right up our alley. Yuri’s exquisite Triumph café racer is so clean and lean with everything being shortened, hidden or removed. At a glance it may seem like a relatively easy look to achieve but when you take a closer look you see the amazing attention to detail. The kind of detail you’d expect from a guy who has won the AMD World Championship and also the Best International Builder award at the Verona Expo. We were surprised to learn that Yuri actually found building a café racer a real challenge. “Standards of building café racers have been developing for decades and seem to be now fixed as undeniable laws” says Yuri. “That’s why it naturally gives much less space for free creativeness than, say, building of a bobber or a chopper.” Even though building a café racer might be a little bit restrictive for a creative guy like Yuri, we still think he’s managed to stamp it with his individual style. The donor bike was a 1976 Triumph Bonneville T140. Although by the time YSC had finished with it there was not much of the original bike left. The immaculate 750-cubic twin (53 HP) sits effortlessly in the open frame with a pair of classic 30mm Amal carburetors, an integrated 5-speed gearbox and a front fork. YSC made this frame very geometrical — its tubes are parallel to the lines of the front fork and the rear shock absorbers. All the rubber hosing was swapped for a more visual pleasing copper piping. The exhaust system, gas tank, seat, clip-ons, foot controls, swing-arm, electric system were all made exclusively for this motorcycle by the YSC crew. The moon disc style wheels are 16” plates from a Harley-Davidson. Finally, the bike was painted in a color Yuri calls “gypsy racing green” – it’s like a more glitzy version of British racing green. The combination of the green, gold, brown leather and copper is a match made in café racer heaven. Yuri tells us their objective was to bring “maximum aesthetic and performance features to the motorcycle with really limited means” as the café racer style doesn’t allow any “extra” or non-functional parts. We think Yuri and his team have done a great job building this faultless Triumph in the true spirit of the café racer. Which leaves Yuri only one thing left to do on this bike… crack the Ton.