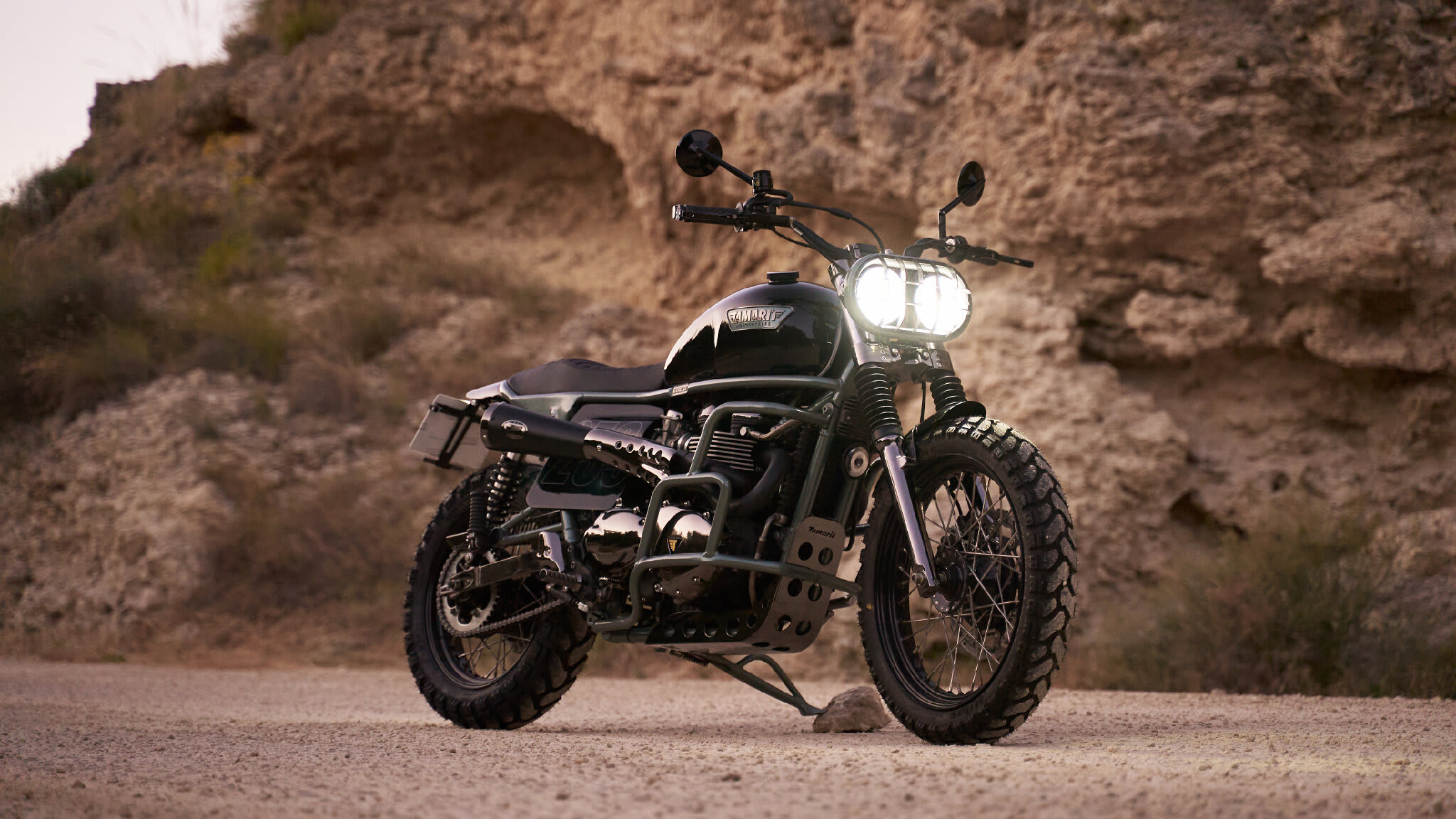 It’s been booming for a few years now, the craze that is off-road 4x4s, think utes/trucks pimped out with big mud tyres, spotlights, over the top bull bars, and super high suspension. It’s always been popular but now it’s definitely the trend du jour. In our own scene, the scrambler is the natural sibling to such machines, and not many have gone all out to build an off-road beast with a no compromise attitude to getting you absolutely anywhere in comfort and style. Introducing Tamarit Motorcycles 108th build, a chassis up build that is appropriately called, No Remorse.

The way Tamarit describes what they set out to achieve was to expand on the scrambler style and in addition to the looks, give the machine the usability to be a true everyday adventure motorcycle. Now I can already hear people saying, but why not just buy an adventure bike, they’ve never been better. And that’s true, the factory offerings are excellent, but if you’ve ridden one, you’ll know the major drawback. They have all the soul and character of a blank piece of paper. It is here that Tamarit seeks to fill the void and being experts with a Bonnie, the modern retro Triumph made for a perfect base.

That foundation however is not built on the stock Triumph frame, only small pieces of it remain as part of the build. This here rock crawler has a chassis that’s been built in-house, on the jig, and to millimetre perfection. From the neck to the twin downtubes, everything is as you would expect, but it is here that things take a turn as the metal work runs like a perimeter frame on the outside of the tank, just above the top of the engine line. This single line then tucks in at the join between seat and tank, before merging with the subframe and helping to provide a set of shock mount supports that can take serious punishment.

The back of the subframe is a kicked up hoop that results in an ultra-neat finish, and the perpendicular frame rail running from front to back gives the bike a whole new look. But that’s not where it ends, just as you would see on a rock crawler, body and engine protection doesn’t just bolt to the frame, it’s part of it and cocoons the engine from the worst the world can throw at it. All painted in a subtle grey, the frame is one of the most unique we’ve seen built for a Triumph project. To add even more rock impact shielding, a custom sump guard has been bent up around the frame and features the always sexy punched finish.

Over the top of that frame sits an absolutely beautifully built fuel tank that has the front on look of a traditional Bonnie item but is designed to suit the new frame, and ends a little short of the centre of the bike as would be seen on a moto crosser. And here you get one of the best features of the whole build, taking a leaf from that MX world, the seat runs up to the tank and then inserts itself into the fuel enclosure. It not only looks trick but allows the rider to shift their weight much further forward when required. Stitched in-house, the black leather is a thing of beauty and has room for a passenger at the rear.

Where the seat finishes, a custom rear guard starts and emerges from under the frame to provide more than adequate coverage to control what may fly off the rear tyre. The function and form extend even further, with a rear taillight allowed to peer through the sculpted fender to deliver the smoothest of lines. At the front of the bike, a much simpler blacked out blade fender sits on custom mounts and the look is completed with a set of very scrambler-esque number boards that act as side covers. It might be a bike built for battle, but Tamarit wants to emphasise that a lot of effort went into the picture perfect paint.

No off-road vehicle would be complete of course without a hell of a lighting setup, and then twin front projectors wouldn’t look out of place on the front bar of a Toyota Hilux. The choice of light units themselves gives serious night time vision and the look is completed with that hardcore front grille that’s ready to deflect anything thrown its way. The mounts for these lights sit on an all-new set of triple clamps, machined from billet, the three bolt lowers provide serious structural integrity. The forks have been rebuilt to hold up to the abuse and a custom set of rear shocks join the party.

To give the twin-cylinder engine a boost in power, a high-rise scrambler exhaust was always going to be the way to go, and once again Tamarit has partnered with ZARD to get the perfect end can. But to add something very different, the raw metal components and the heat shield have been nickel plated, giving a stunning shine and hard wearing finish. Underneath all of the good looks, a new wiring loom is built around the Motogadget catalogue and a key fob helps to do away with the ugly ignition switch.

All done and delivered to the new owner, ‘No Remorse’ allows the rider a cool custom to roll on the city streets, and then come the weekend, it’s out to play in the mud with those big 4x4s.