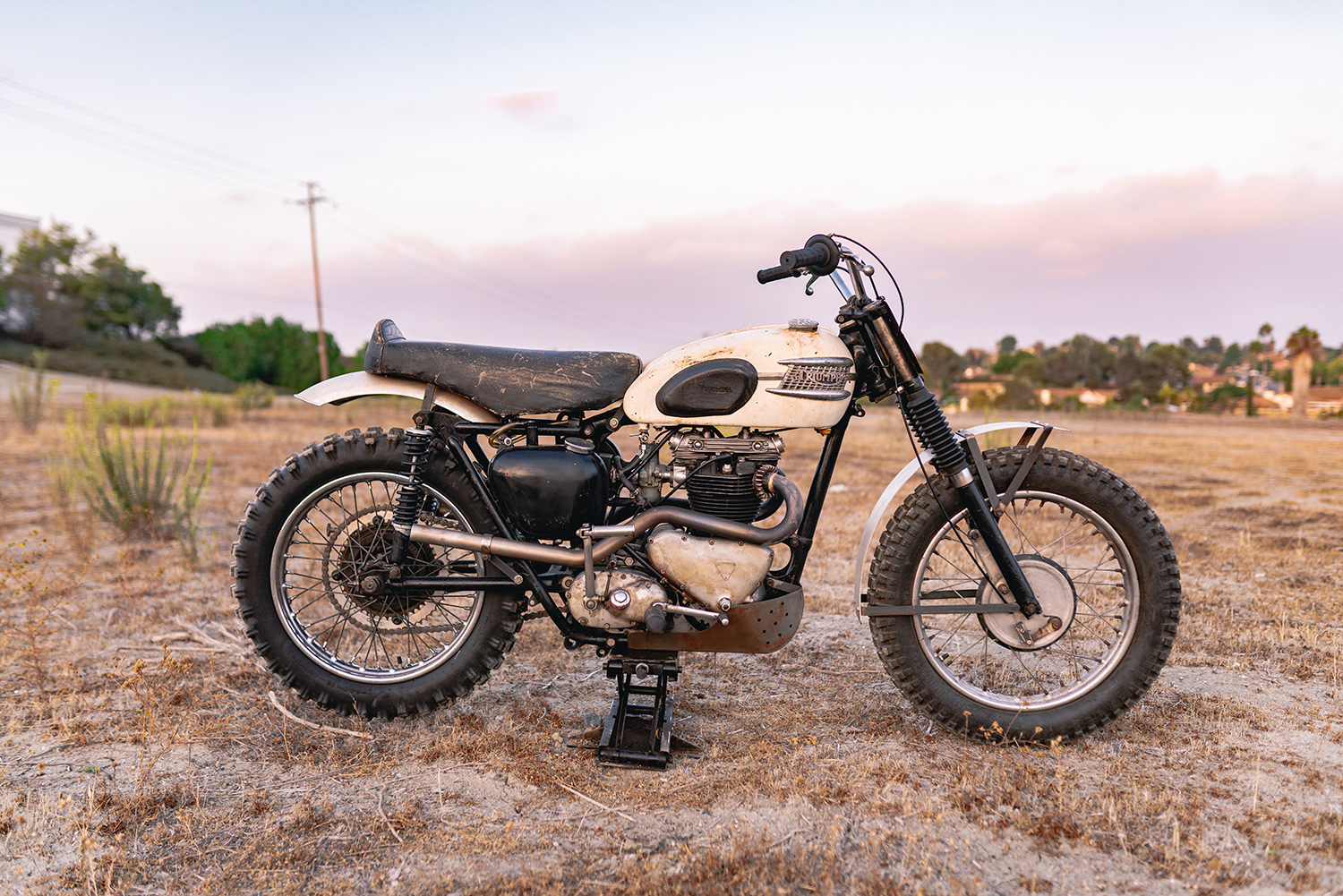 It’s hard to mention the words ‘Desert Sled’ and not think of the glory days of Triumphs in the 50s and 60s: the era of legendary riders like “King of the Desert” Bud Ekins, bringing home trophies from around the world on his TR6. Ekins was not only a professional dirt and desert racer, but he also had a Triumph dealership in Hollywood selling bikes to the likes of Steve McQueen and Clint Eastwood. It was his friendship with Steve McQueen – who bought many Triumphs from Bud – that helped turn him into the leading Hollywood stuntmen he later became.

California-based graphic designer Paul Hartman has always had a passion for vintage desert sleds and has built many over the years. But he has been waiting for the right donor bike to build the ultimate Bud Ekins-inspired Triumph Desert Sled – right down to the original patina. “I had been collecting really cool old desert sled parts over the years and had been planning on building a full-on Bud Ekins style bike,” says Paul. “When the donor bike came in, I knew it was the perfect one to use for this project.”

Paul was lucky enough to pick up a 1960 pre-unit from a Northern Californian collection that had ‘Desert Sled’ written all over it. “When I got the bike it was stripped down, but it had a ton of cool Webco accessories on it, knobby tires and was full of dirt, so I knew it had been setup as some sort of dirt bike or sled.”

“I’ve always been inspired by the old desert racers,” says Paul. “They’re big, beefy and made to take a beating. Plus they have such a cool look. I love them. I’ve had a few, but wanted to fully build my own with a look that I had been dreaming of.”

The Triumph he scored for the project turned out to be the perfect frame and engine combination. In 1960 Triumph introduced a new pre-unit with some minor engine changes, and a new Duplex double down tube frame. The first Duplex frames from 1960 had some strength issues and were slightly heavier than the 1959 single downtube frames. “This one has the new (at the time) 1960 engine, but has been placed in the earlier 1959 frame. I’ve seen several other Desert Sleds of the time with this setup, so I’m guessing that was the thought behind it.”

The build started by completely stripping down the bike, cleaning decades of dirt and grime from the vintage relic. After putting the TR6 back together it was time to fire the bike up. To Paul’s surprise, this 60-year-old workhorse started straight away – being awaken from its long slumber. “It actually ran really well with just a bit of tweaking,” he said. Now that she was running smoothly, it was time to add the battle armour.

Paul has been collecting vintage Desert Sled parts for years, and has even moved into a bigger garage so he can store all his Triumph treasures. It was now time to start fitting all these parts into the new project. First he added the Bast Bros skid plate, Bud Ekins high pipes, Bates foot pegs and competition shocks. Next he fitted a Webco air filter, flat blade-style front fender, Bates cross-country seat and competition bars.

To finish it off a BSA half brake front wheel was used with period-correct racing rubber and a large Triumph fuel tank with original patina. “I also added a bunch of other little bits that make these sleds so neat. A lot of this stuff is really hard to find, so I’m really happy to put together such a bike.”

When building this vintage Desert Sled, Paul wanted it keep it as close to period-correct as possible. He wanted this bike to look like Bud Ekins had just jumped off it after winning the Baja 1000. “These bikes are not real difficult to build; it’s just a matter of finding the right parts, and getting everything to fit up and look right. They are a blast to ride, I highly recommend it.”

This bike might not have taken long to build, but it has been years in the making, with Paul slowly accumulating the right parts waiting for the right bike. “I love everything about this bike, it looks right, it feels right and it rides really well. If you look at old Bud Ekins bikes, Steve McQueen, or Buck Smith, this is what I was after. Also, I’m a sucker for crusty aged looking bikes. The patina on the tank and the perfect looking Bates seat just completes it. I wouldn’t call it a show bike, but I can sit and look at it for hours.”