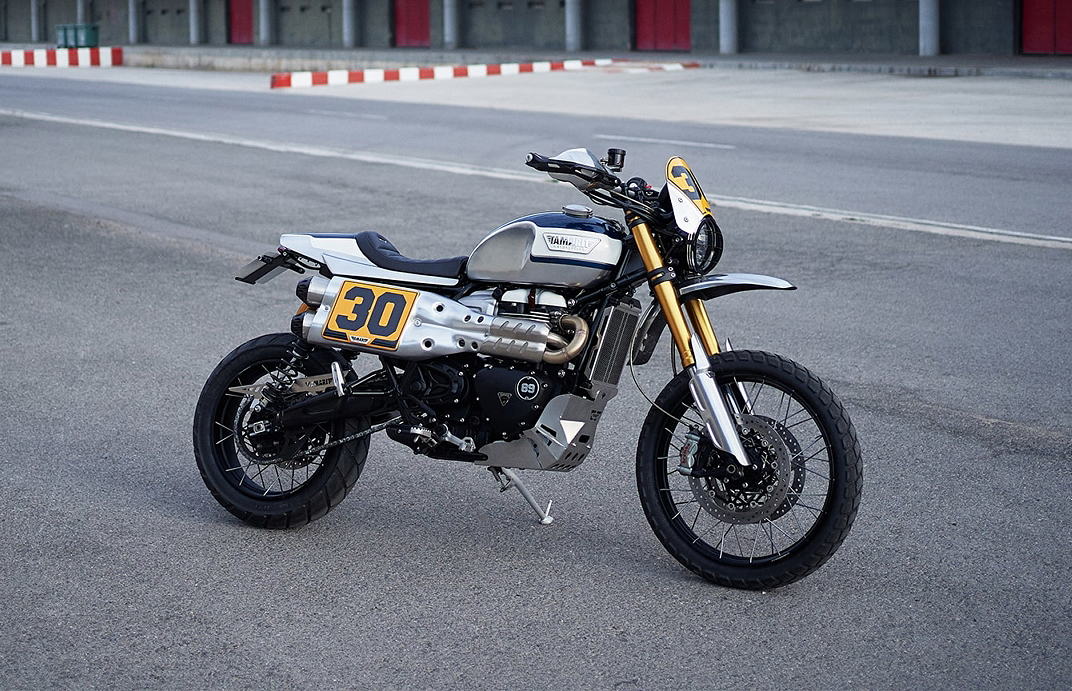 Nestled in the city of Elche in southeastern Spain, just a stone’s throw east of the coastline that hugs the Mediterranean Sea, Tamarit Motorcycles is a customs outfit that works exclusively on Triumph’s modern classics. Though only founded in 2015, Tamarit now employees more than dozen staffers and boasts a body of work that has already grown to include well-over 100 bolt-on parts and almost as many one-off builds, with the Spanish shop now responsible for the conversion of 90-plus donors from the Hinckley firm.

Despite the extensive number of builds the shop now has under its belt, you can count every one of Tamarit’s tracker-style builds on just one hand, with its last fast and left-focused project being its 15th completed work. However, 74 builds later, and Tamarit has now returned to the tracker aesthetic, borrowing from the classic genre to deliver an off-road-capable scrambler that’s been injected with some unmistakable dirt track style.

Christened “Valhalla,” the project was commissioned by the friend of a previous Tamarit client. The customer’s 6’4” (or 1.95m) height ultimately lead the crew at Tamarit to opt for Triumph’s Scrambler 1200 XE as the project’s donor, as its premium long-travel suspension not only afford it some genuine dirt-going capabilities but also provide a tall ride height and a saddle that stands at 33.1”.

“The client gave us free rein in terms of design, something we appreciated as it finally gave us the freedom to develop a dirt track style concept for the Scrambler,” explains the shop.

In typical Tamarit fashion, the shop chose to retain the Triumph’s iconic stock tank, instead focusing on the tail section as the key element in the project’s transformation, before proceeding to compliment the seat and tail and round out the tracker-inspired bike with a host of smaller custom components and bolt-on additions.

This took the form of a traditional tracker tail kit that attaches directly to the stock subframe and is capped off with a one-off leather seat. And, just like Tamarit has done with a slew of other available bolt-on Triumph parts, the shop used Valhalla to debut a new plug-and-play tracker tail kit that will soon be available for purchase through its website.

“This seat is inspired by the units on old dirt track racers and gives the bike a more aerodynamic and sporty silhouette, bordering on a racing aesthetic. It’s a monoposto seat designed for the freedom and comfort of the rider, though it also enhances the dirt track style shape of the bike,” Tamarit tells us.

In an effort to keep costs down while still producing a thoroughly transformative build, Tamarit turned to its extensive in-house catalog of bolt-on Triumph parts. This includes the Elche outfit’s custom engine badges, full-coverage Patagonia skid plate, and Scrambler 1200 chain guard. The stock LED headlight is also now protected behind one of Tamarit’s headlight grilles and shrouded via one of their Atlas headlight cowls.

“Over the course of the transformation of Valhalla, we’ve added parts that make it more adept across a variety of different terrains and simultaneously make it more of a true Scrambler with dirt track style,” says the Tamarit team.

The shop also relied on some of its bolt-on bits to redo the XE’s fender setup. In front, the stock piece that once tightly hugged the tire has been swapped out for one of Tamarit’s Sahara front fenders while the rear item has been deleted and the license plate and rear lighting array it once supported have been transferred onto a fender eliminator kit from the shop’s store. The Scrambler 1200’s stock dual-pipe high-mount exhaust has also been jettisoned in favor of one of Tamarit’s “Dakar” stacked silencer exhaust systems — an offering that first appeared a few months ago on the shop’s 76th build of the same name.

Having gone with the top-shelf XE-spec of the Scrambler 1200 — which boasts a fully adjustable 45mm USD Showa fork and a pair of Ohlins rear shocks that afford 200mm (or 7.87”) of travel front and aft — Tamarit didn’t see any need to tweak or upgrade the donor’s suspension, instead, fitting the front-end with a custom pair of fork guards before calling it a day. The same went for the XE’s radial-mount quad-piston Brembo M50 monoblocs which have also gone untouched for obvious reasons.

No Tamarit project would be complete with a custom paint job, and the Valhalla was no exception. This time around, the Triumph has been cloaked in a livery that’s comprised of dark aquamarine, white, and liberal amounts of chrome, before being finished off with bespoke “Tamarit Motorcycles” tank and seat badges. “It’s a color combination that’s designed to highlight the dirt track racing aesthetics of the bike,” relays the Tamarit team.

All in all, Valhalla is a pretty incredible display of what little more than just a paint job and roughly €2,400 (or approximately $2,800) worth of bolt-on parts can do to transform a stock machine, especially when starting with the right donor model. While not as involved as some of Tamarit’s previous projects, this XE-spec Scrambler 1200 nonetheless wonderfully demonstrates the expertise that the shop has developed after wrenching and welding on nothing other than Triumph modern classics for the last six-or-so years.

And, based on how far Tamarit Motorcycles has come since its first few builds and the level of quality and craftsmanship its team is currently displaying, we can only imagine the kind of bikes that will be leaving the Elche firm when it reaches its 200th build.