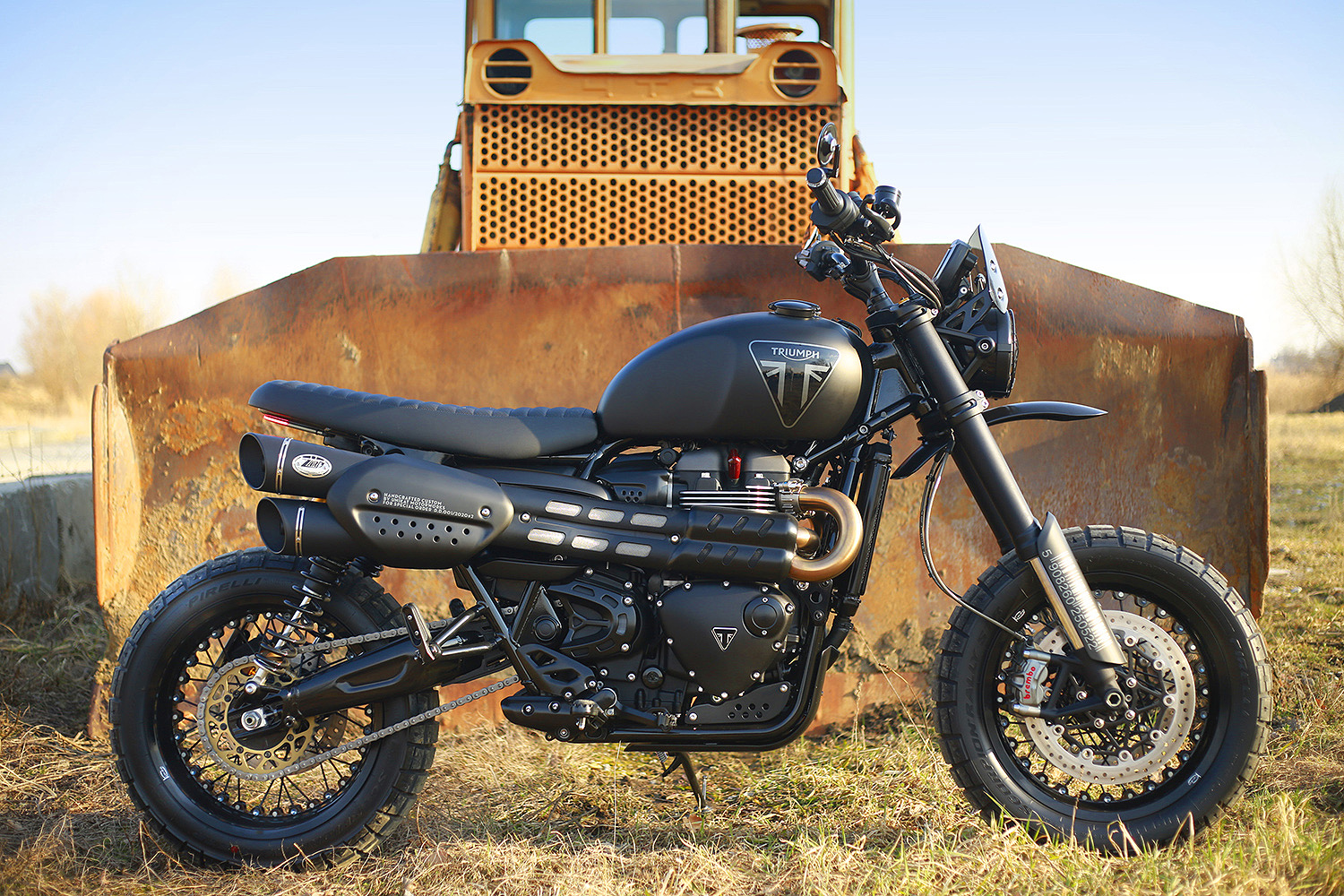 Once well established and having built a solid reputation, many a brand goes one step too far in their attempt to be too many things to too many people, and quickly come crashing down. In a rapidly changing market place you certainly can’t rest on your laurels, so how do you find the balance without toppling over the edge. Well, two brands that are known for their wide-ranging offerings are Triumph Motorcycles and Poland’s UNIKAT Motorworks, so paired together could they deliver a genuine all-purpose motorcycle with a big dash of custom cool? You bet. And this Polish built Triumph Scrambler 1200 XE is proof that in the right hands, you can never have too much of a good thing.

Triumph of course have built a Bonnie based Scrambler in the past, but the 900 model was too fat and seriously lacking in the suspension department. The brand sure captured the cool look of ’60s trials bikes, but in their attempt to be too many things…, they failed. But with the new 1200 range they had a chance to redeem themselves, and in the form of the XE you get a better chassis and engine, smoother power but with less weight, drastically improved suspension, and a host of rider modes that give the bike genuine off-road ability.

Trials winner, World Endurance Champion and now bike reviewer Steve Martin has ridden the XE extensively and concluded it’s as good off-road as any adventure bike; high praise! So the donor bike was sorted, what about the team in Poland led by Grzegorz Korczak. Well, they’ve built everything from badass American bobbers, to ’70s Ducati cafe racers, modern missiles to vintage masterpieces. Yes, this is one shop that can do it all and still doesn’t spread itself too thin.

So, when client Dominik had Triumph deliver a brand new 1200 XE to their workshop door, it was time to make magic. Immediately the team was tearing into the new Trumpet, evaluating the stock parts and working out what could be improved and how. Grzegorz then spent two whole days on the phone to suppliers, piecing together an exact budget that could be approved before the build commenced. Many clients understandably have eyes wider than their wallets. Finally, he did 12 different renderings and Dominik picked the one he loved most.

This is the measure twice, cut once approach and it’s clear that it works with UNIKAT having delivered over 100 custom bikes. The first task of the build was to take all of the silver parts off the bike as their destiny was to be black. From the swingarm to the engine guard, injectors covers, and even the smallest of parts. They were sandblasted back to bare metal and then given a hard-wearing black powder coat. Then attention turned to tidying up the rear end, with the client wanting a minimalist look. The inner fender remains in place to catch the worst of what comes off the tyre, extending all the way under the seat without venturing past it.

An integrated LED taillight unit is then formed into the fender, rather than the metal of the subframe. This will be offered as a kit, requiring no cutting of the frame for the stripped-back look. With the tail tidy complete, the license plate needed a new home and the guys have fabricated a custom bracket and LED light combo that bolts to the left side lower shock mount. This too is set to be available from UNIKIT for owners of the 1200. Despite the genuine off-road ability of the Scrambler, the client wanted something more akin to what James Bond would ride over the crowded cobblestone streets of old Europe.

So the stock wheels were pulled and replaced with big dollar stunners from Kineo. The tubeless spoked items feature grey nipples and were selected in 17-in diameter front and rear before being wrapped in Pirelli Scorpion tyres to suit the task. Then the forks were re-anodized black, a new front fender mounted high style, and the protectors given custom graphics. To keep the blacked-out Bond theme going, all of the metalwork that wasn’t powder coated has been hit with a mix of matte and gloss black, with the Triumph-Union Jack logo perfect for her majesty’s secret service.

The upholstery is no less impressive, natural hand dyed leather that is beautifully stitched and complemented with a host of quality Motogadget and Rizoma components. Finally, any good Scrambler requires the perfect high mounted exhaust and ZARD comes to the party with a stunning set of blacked out silencers.

Now under 200kg, with Ohlins suspension, a full IMU controlled electronics package, Brembo brakes and that gorgeous twin-cylinder torque, UNIKAT have given the XE the looks to match and the finished product is a winning combination.