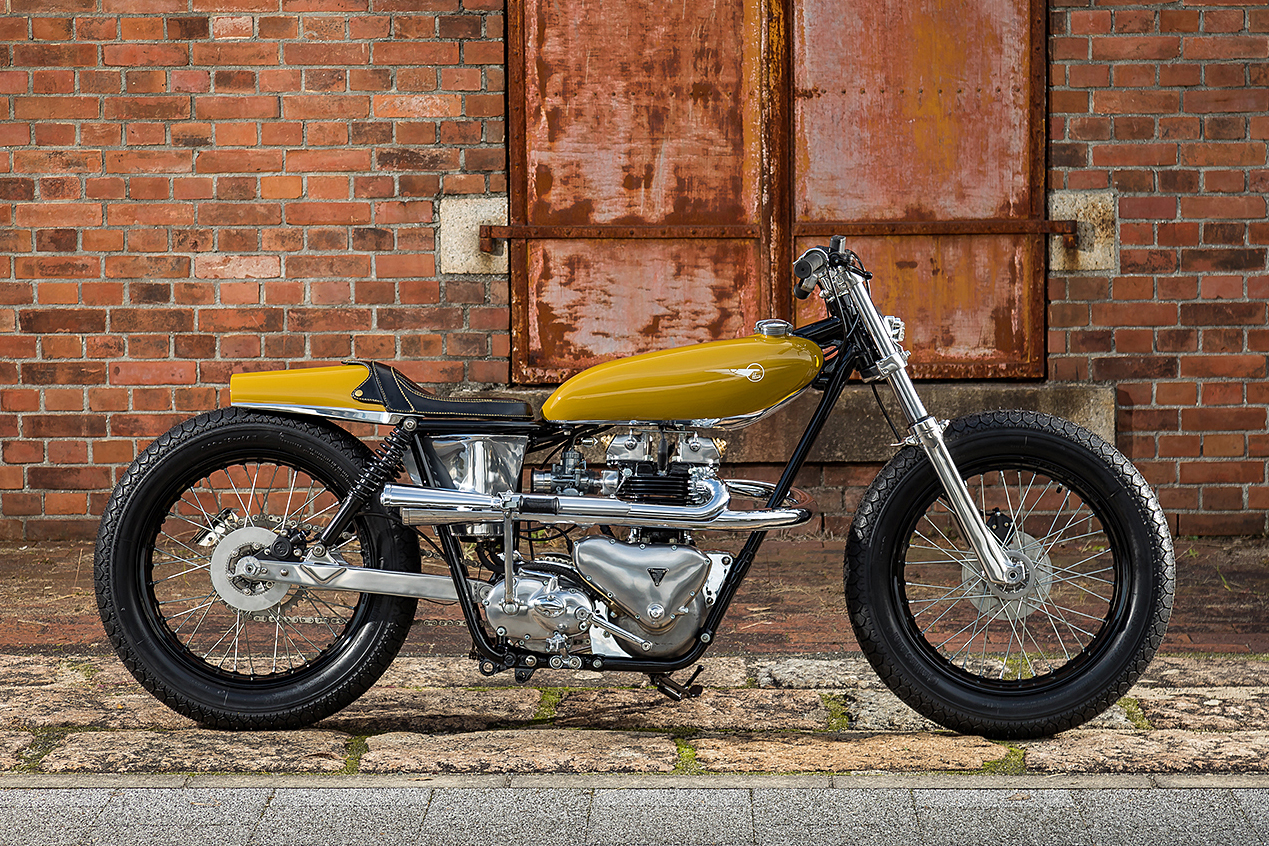 There are a rare few artists throughout history, that so special is their talent, that they not only capture the zeitgeist of their time in a previously unimaginable fashion but go on to break the bounds of their chosen field and become globally synonymous with excellence. Picasso, Shakespeare, Mozart, et al, whose compositions capture the heart of everyone from the humble common man to kings across continents. A maturing custom bike scene has been waiting for the stars to align to see such a grand master crowned and when the theme ‘peace’ was chosen for last weekend’s 30th Anniversary Yokohama Hot Rod Custom Show, a premonition was born. Now it can be unveiled to the world having been fawned over in Japan, we present Heiwa’s exquisite Triumph 6T ‘Seven Star 7’.

From a nondescript building on the docks of Hiroshima’s port, the humble Kengo Kimura has been building incredible custom motorcycles for years. Just a small sign in the window reveals this is indeed the home of Heiwa Motorcycle while walking inside is like going back in time. The cramped warehouse-style building is filled with old tools, endless vintage motorcycle parts, bikes laid out haphazard like canvases on the floor and all is dimly lit, apart from the large articulated lamps hovering over the master at work.

A regular at the Yokohama show each year, and having taken home the top award twice, Kimura-san learned in April the theme of the show was to be peace, the direct translation of Heiwa and set about envisioning another masterpiece.

Few builders have transformed as many simple Japanese single-cylinder motorcycles into such stunning street machines, but with a long-held love for old British bikes, he chose a 1954 Triumph 6T as the basis for his 2022 show contestant.

Not only an incredible fabricator, Kimura-san is also a mechanic of considerable skill, so it was telling as to his pursuit for perfection, that even the master had an old 6T Haynes manual sitting on a tool cart next to the lift. To start the build a bitsa bike was sourced and the foundation that is the frame would come in for considerable customisation. There is almost nothing left of the original, with the old bendy British steel totally replaced.

Working on a jig, the lines of the twin downtube setup flow perfectly below to the factory-style cradle that scoops up and holds the pre-unit power train. The backbone is now dead straight, as it runs on a slight angle to the centre posts, with a flattened out seat section.

To get the stance he was after, Kimura-san instantly ruled out the stock suspension and began a transformation that includes a totally handbuilt aluminium extended swingarm. The narrowed rear end then hosts a pair of all-new upper shock mounts that bolt through chassis rails themselves, rather than relying on ugly afterthought mounting tabs.

Having shaped beautifully smoothed lower mounts in the alloy, an email was sent to MDI in Taiwan to prepare a custom set of their lowdown shocks, specially built for the task. Then having modified the headstock and treating it to all new bearings, the front end had to come in for a special transformation of its own, and this time it would be an Italian firm supplying the goods.

A vintage set of conventional Paioli 50mm forks are clamped in an absolutely stunning set of two-bolt triple clamps, again with a narrowed fit to ensure the lines of the bike are flawless from front to back. With a set of custom hubs machined and laced to new 18in wheels, the bike was now rolling on vintage Continental rubber.

The bodywork had already been envisioned for months inside the magic mind of Kimura-san, and that tank is simply a thing of beauty. Custom crafted from aluminium, days were spent hammering, stretching and rolling each piece into its final shape.

From the way it slots over the backbone, to the sweeping lines of the leading edge and the sheer length of perfectly formed and flowing alloy, you can spend an eternity drinking it in, like the crowds crammed in front of the Mona Lisa. The tail section had to be just as good and the master was up to the task, using his signature style to keep the long and low look running the full length of the bike.

Now that he had the major metalwork complete, the legendary parallel twin engine could come in for his attention. Separated into their two pieces, both motor and box are rebuilt to perfection and then treated to a nut and bolt visual makeover, that includes hours of polishing, custom covers and giving the old British bulldog some modern electrical tricks.

As with all of his bikes, no matter how special, Kimura-san intends them all to be ridden hard, so the fuelling has come in for a Japanese refresh utilising a Mikuni VM32 carb, that draws its air via a hand turned velocity stack. The finishing touch to the mechanical package is that extraordinary exhaust, the fully split high pipes merging into one hell of a magic muffler.

As Kimura-san began the task of crafting a perfect vintage leather seat at Heiwa HQ, the tins were sent over to the paint shop of Mr Kuboi, who mixed up a special mustard hue that is perfectly laid down, leaving the lower polished edges exposed. Piecing the bike together and there is no shortage of incredible detail on display, from the one-off handbuilt headlight and handlebars to the frenched-in Daytona taillight, and custom controls.

A highly polished fork brace serves a dual role as a small fender and the braking is now via modern Brembo calipers, albeit small in stature so as not to overbear. Sadly for Kimura-san he just missed out on the top trophy – but van Gogh’s The Starry Night was unknown on its completion – and I truly believe ‘Seven Star 7’ is simply that special.