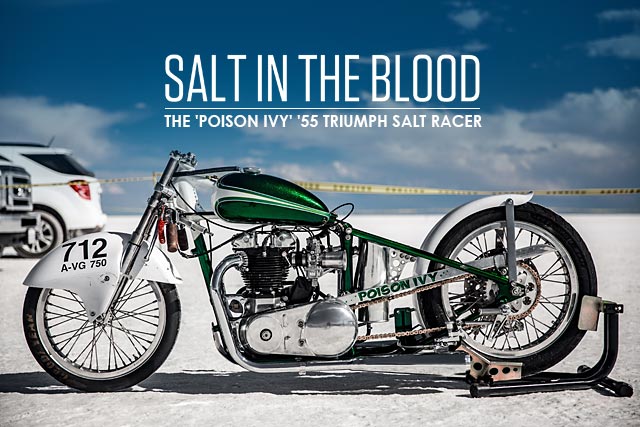 Within the course of an hour I went from wanting to roll my bike off a cliff to howling like a wolf with overwhelming happiness. Now that I have been racing for a number of years I can tell you that this is completely normal. Racing can bring lows and outright frustrations, but it can also bring you the sweetest joy and sense of accomplishment possible. I built Poison Ivy back in 2010. I had started to mock up this 1955 Triumph T110 as a street bike, a chopper, but then changed direction with the aim to race at the Bonneville Salt Flats at Speed Week in August of 2010. Poison Ivy was entered in the A-VG 750cc class. The A stands for Special Construction, which means a purpose built race bike, not a modified stock bike. The V stands for Vintage, which at Bonneville means 1955 and earlier. The G stands for gas, as I would be running gasoline as opposed to methanol, nitro, or any other fuel. The 750cc was my class displacement due to the fact that I had a bored out 650 c.c. Triumph, just 0.070” over stock bore which pushed me to 681 c.c., a disadvantage in the 750 class.

At Bonneville Speed Week, you have to qualify for a record by riding faster than the existing record. You then make a back-up run the following morning. The average of those two runs is a new record if it exceeds the current record. My first year at Speed Week I qualified for a record but couldn’t back it up; I bent a valve on my return run. In 2011 I found success, setting a new A-VG 750cc record at 117.108mph. At Speed Week 2016 this record was broken. The new speed was 123.534mph, set by Patrick and Nick, an uncle and nephew team from Switzerland. Suffice to say, I immediately started making plans in my head to reclaim my record. Bonneville Speed Week takes place in mid-August and is an SCTA (Southern California Timing Association) event, and 2017 marks the 69th anniversary of the event. Our race crew is made up of friends and family from all over the country, as well as Canada and Australia. Another important part of the Lowbrow Land Speed Racing team are Alp Sungurtekin and Jalika Gaskin of Los Angeles, California. Alp is the builder, tuner and rider of the fastest pushrod 650cc motorcycle of all time, at 175.625mph on nitromethane, with his Crew Chief Jalika assisting his efforts. They made the trip out from LA with the T200 in tow, which is a partially streamlined 1950 Triumph 650cc motorcycle that Alp built in an attempt to exceed 200 mph on a vintage motorcycle, running on nitromethane.

Speed Week proved to be an extremely fun event, we typically saw the sun rise on the salt and left the salt as the sun set, long days full of tuning, mechanical work, quick fixes, bad humor and almost no food. I ended up doing sixteen runs during Speed Week, which requires a lot of work, and waiting in line, but without success. I was consistently just below the record, coming less than 2 mph from qualifying for a new record speed. I was chasing a problem of low cylinder compression on one side that I could not sort out. I left Speed Week without the record I was questing after, but having had one of the most fun weeks of racing I had ever experienced. Only a few weeks elapsed between Speed Week and World of Speed, a short, four day event in mid-September at the Bonneville Salt Flats. A few days in the garage got my motor buttoned back up and the chassis and rest of the systems dialed in. We loaded Poison Ivy, spare parts and tools in our trailer and headed West. World of Speed is similar to Speed Week, except that it has less than a quarter the amount of racers and spectators. The weather is also much cooler than the high summer heat, and when you are wearing full black leathers this is a welcome change. Friday, the first day, welcomed us with high winds, steady wind of 15mph and constant gusts of 25-30mph. There is a hold on the course with no racing any time there is a steady wind of 14mph or greater. Unfortunately for everyone involved, this wind never let up and no racing took place the first day. My bike sat first in line, waiting for it’s chance. The following morning it was sunny, cool, and clear skies with almost no wind. My nerves ran high with excitement as I donned my leathers, warmed up my bike and waited for racing to begin. Once I hit the top of third gear there was some hesitation in the engine, and shifting into fourth I could feel that the power wasn’t there, it wasn’t pulling as it should. I thought it might be a venting issue and checked my whole fuel system before doing another run after several hours of waiting in line, only to have the exact same result. Phill, one of our good friends and crew members, removed the spark plug leads from the magneto cap and found a mess of corrosion. The issues I had been having during World of Speed was the corrosion of the spark plug terminals; high RPM and vibration started causing the poor connection to break up even more. We made a new set of spark plug wires from the spare parts we had brought and I made another run. It was like a new motorcycle. It revved to the sky and as I watched my small GPS I saw the speeds tick steadily over 120mph, up to 125 and stay there for almost two miles straight. This is where the howling like a wolf and overwhelming happiness come in. The lows that accompany frustration with underperforming machines was instantly replaced with joy and excitement; I had qualified for the record at 124.207mph, I was on my way. Only a slight .673 mph over the existing record! My back up run was almost a duplicate of the first, with an average of 124.980 mph, and a top speed at the 2-1/4 mark of 125.1888. The two way average of 124.593 mph, just a hair over 1 mph faster than the record. People who spectate and race at Bonneville will say things like ‘the salt gets in your blood’. I think it is true. I do know that the nature of speed is that you will always want to go faster. I will be at Bonneville next year, working to increase my existing records and set new ones, competing with other racers though the real competition is with myself, with my bike and with the salt.