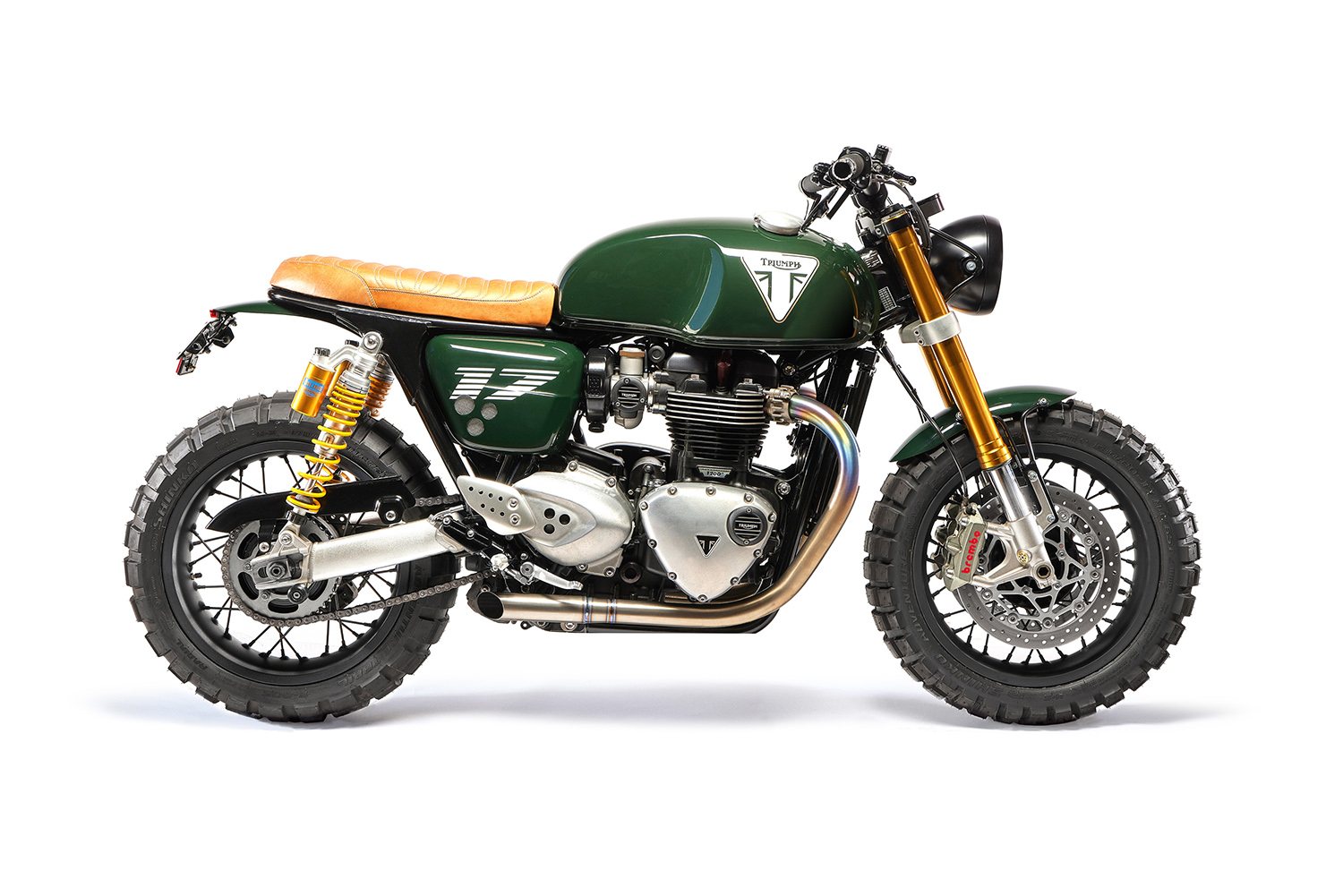 When it comes to choosing a donor bike for a custom build, the easiest, and often cheapest solution ­(in the long run) is buying a factory bike that already has the performance parts you need. So when a client named Davin came to Brisbane’s Ellaspede with a history of building high-performance custom cars, he knew from experience that he wanted to start with the best base bike he could find.

After doing a bit of research, he landed on a 2016 Triumph Thruxton R that already had a ‘High Torque’ 1200cc parallel twin engine and all the performance bells and whistles. The brief was pretty straightforward: Davin wanted the Thruxton to be given a full scrambler makeover after seeing a similar treatment done in the UK on the same model.

When the bike rolled into the Ellaspede workshop, it was stripped down of all the unnecessary parts. “This bike had a factory option ‘flat’ seat fitted, which combined with the stock rear guard made the rear end look super long, almost as if the swing arm was too short for the bike!” recalls Hugh from Ellaspede. “So as you can imagine we were keen to shorten the rear frame up and correct some proportions moving forward.”

With the rear frame shortened, tidied up and a hoop added it was time for a custom steel seat pan with a quick release latch and for the custom steel rear guard to be shaped up. Mounting nuts and wiring tabs were welded to the underside of the guard for the tail light and number plate holder setup.

At the front, a custom shaped steel guard now hangs off custom tube mounts. Up top, the stock top triple tree was removed along with the clip-on bars for an LSL Thruxton ‘Superbike Kit’ triple tree with matching LSL aluminium ‘craft’ bars. The new bar setup isn’t that much higher then the ‘high’ factory clip-ons, but they fit the new look and provide just enough rise for Davin’s desired riding position.

The Motogadget catalogue was also raided for their Motoscope classic speedo and M-unit Blue which was set up with their M-lock RFID ignition. A Peak Mod Vis system helps the whole lot come to life.

Lighting was upgraded to a new LSL Clubman headlight on custom tube mounts to match the front guard. Rear facing illumination is taken care of by a Koso Hawkeye LED tail light tucked up under the guard on an Ellaspede Ninja Star licence plate holder, which also carries a pair of Motogadget Pin indicators on Ellaspede plate-mounted indicator mounts.

The seat was shaped up with high-density comfort foam and covered in tan leather with a ‘reflected’ tuck and roll design from the centre out towards the front and back.

A few exhaust options were discussed, and titanium was being tossed around as the material of choice, so when Davin happened onto the current 2-into-2 setup on eBay from a Thruxton project that wasn’t going ahead, he jumped on them for a bargain price. Hugh remarks: “They arrived with no visible brand markings, so we can only assume they were custom-made and possibly moved on due to how loud they were straight out of the box. Not suitable for Davin’s daily rider duties, we added some mechanical baffles in the end of the pipes to ensure his neighbours don’t hate him on every startup.”

Aiming to black out some of the polished silverware, Davin wanted the wheels stripped and powder coated in matte black before being covered with chunky Shinko E805’s front and rear.

With the bike now really starting to come together it was time for paint. Although it looks a lot like the classic ‘British Racing Green’, Davin put his own spin on it. “I’m a Porsche fanatic, hence the paint is actually Porsche Brewster Green, which goes well with the contrasting gold shocks and tanned seat,” says Davin.

The classic Triumph ‘T’ logo adorns the tank with a subtle tan outline tying in the seat colour. The front guard, rear guard and both side covers were covered in the same Porsche green, with the side covers also sporting Davin’s old lucky basketball number ’17’ on both sides.

With all the parts painted, it was time for a test ride. Ellaspede: “Believe us it was an absolute hoot! A slightly more upright riding position mated with an unbelievable bark from the titanium pipes would be sure to put a smile on anyone’s dial from day-to-day.”

The guys at Ellaspede were particularly happy at how this Thruxton Scrambler turned out. “Now when we stand back and look at the bike we’re really pleased at how it’s come together as a whole. The green paint is a nod to the traditional British colour but reflects Davin’s own interests outside of bikes. It looks muscular, but trim in areas where the factory bike needed a nip and tuck… plus we didn’t have to ‘reinvent the wheel’ to get it there.”