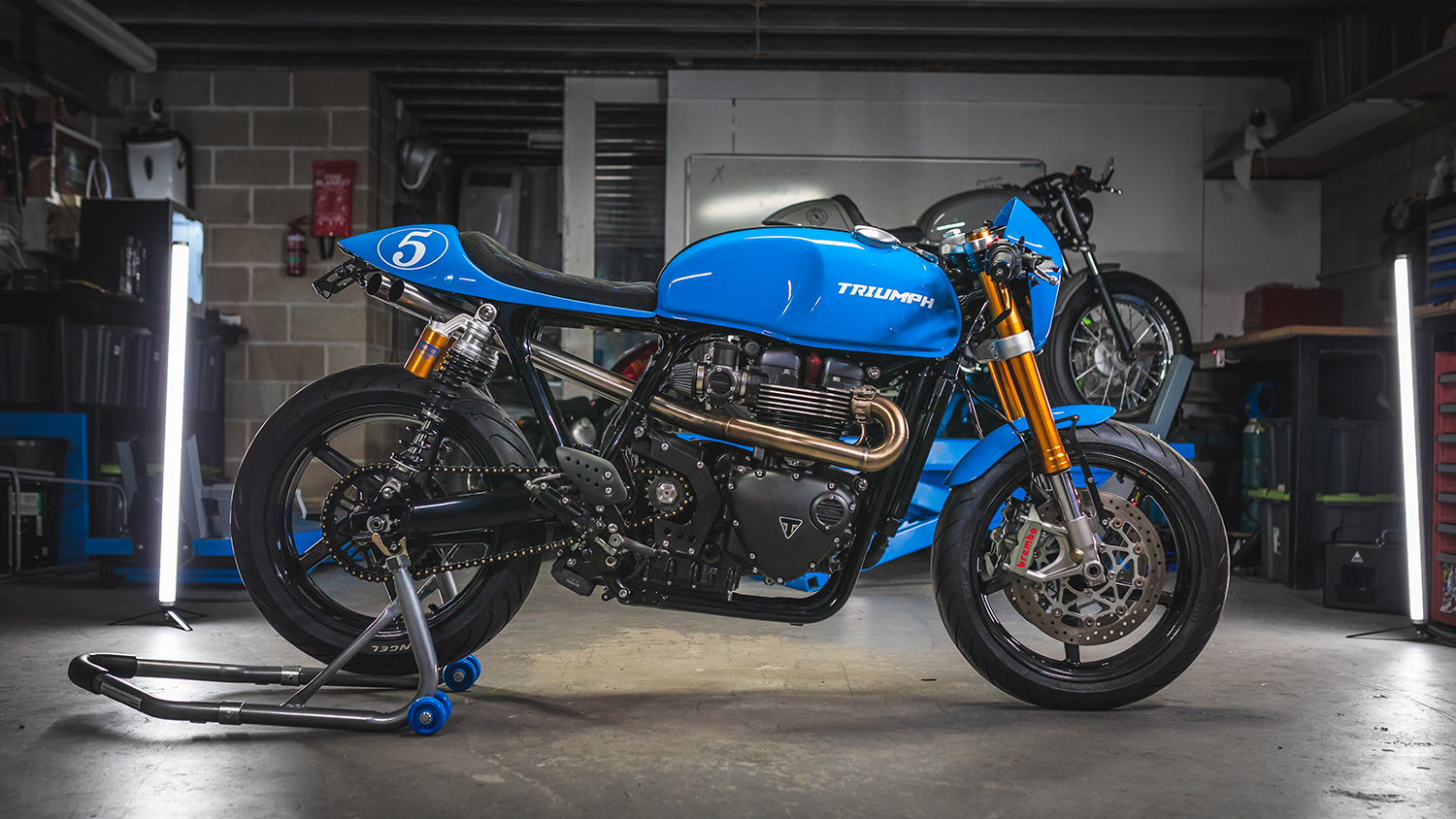 It seems every time we catch up with Wenley Andrews he’s just turned out another killer custom creation that raises the bar as to just how cool a bike can be. The ‘Motorcycle Alchemist’ has long been the man in demand for companies looking to make a splash across a range of industries. An his latest collaboration is arguably his best, joining forces with Flow Motion Project to build the ultimate Triumph Thruxton R, which combines cutting-edge technology with a century of classic racing pedigree. The result is this badass bike known as ‘Blue Diablo’, an incredible cafe racer, that could well be parked in your very own garage.

Flow Motion Project is the brainchild of Shannon Fedden, a passionate motorcycle rider, who wanted to create a community whose members would have access to the scene’s best builders and industry players, as well as their products and services. In addition to these benefits and exclusive club deals and discounts, members also support the broader community with 5% of membership revenue going to the Smith Family to improve the lives of vulnerable children. In case you’re still not sold? All members go in the draw to win this incredible custom motorcycle and many more to be built in the future.

So, to launch the club in style and celebrate big things to come, Shannon turned to Wenley Moto Design to build this spectacular giveaway prize that would pull at the heartstrings of any custom bike enthusiast. “The list of modifications is long but very clear in their purpose; to build a race-inspired Thruxton R café racer that we have been longing for,” Shannon explains. With the bike acquired it was up onto the workbench, stripped down, and then time to stand back so Wenley could envision his design. To bring it to life the majority of the bodywork would have to be handmade and the colour something special.

The stock Thruxton tank remains in place, with the metal strap featuring perfectly spaced speed holes. The remainder of the bodywork however is all custom WMD, with the handmade front fairing giving the bike a very racey look. Below, the custom fender is appropriately minimalist with neat mounts helping it to float effortlessly over the front tyre. But the pièce de résistance is without doubt the tail section, the perfect cafe racer styling, over a reworked and re-painted subframe. With the side covers gone and plenty of negative space revealed beneath the seat, the bike takes on a lighter and more aggressive appearance.

But such a beautiful bike deserves a big dollar colour scheme and the world of supercars was studied to find just the right one. “Thanks to Porsche, ‘Blue Diablo’ now adorns the same race-inspired colour as the Porsche 911 GT3 – Rivera Blue, set against the blacked out engine and components,” Shannon smiles. The transformation is both immediate and stirring, with it almost impossible to avert your eyes. The graphics are kept simple, with the number 5 selected as it was the race number of Jack Marshall, who rode a Triumph to victory in 1908’s Isle of Man TT.

The seat is another of Wenley’s incredible creations, Black Alcantara that has been stitched together with paint matching thread. The go has to match the show of course, and one of the single best modifications you can make to any vehicle is lightweight wheels. So, the very best in the business were chosen with a set of BST Diamond Tek 5 Carbon wheels drastically reducing unsprung weight and the wider 180 rear giving an imposing stance. With the Thruxton R already sporting Ohlins suspension and Brembo brakes, you can bet that this bike handles like it’s on rails.

To give the engine a spice up, the intake now breathes through S&F waterproof air filters and with the airbox deleted, the rear end has been rewired. For the exhaust, Wenley went wild and crafted a set of 1-7/8in pipes that finish in a shotgun style under the tail section. With a Black Box install to retain the best of the electronic functions and an engine control module from Tune Boy, the R spits out a very healthy 96rwhp after a solid time fine-tuning things on the dyno. A lithium battery helps to get the party started, with the engine treated to a host of black finned covers, and a matching chain with Superlite RSX sprocket.

Everywhere you look on this build there is quality, below the modified top clamp the clip-on bars wear Mo View Café mirrors with an ST Speedster gauge positioned between the relocated ignition and reservoir. The headlight is a High Sider Bates 5-¾ LED item and you won’t see any of the wiring thanks to an ultra neat install and custom tray at the rear. Mo-Blaze Motogadget front and rear indicators take care of business and the custom numberplate holder and tail light complete the ultra-clean look. The end result is simply to die for and you wince at the thought of what it must have cost.

But you don’t need to die nor kill your credit card to own the incredible ‘Blue Diablo’, Australian residents need only to join the Flow Motion Project community and this incredible creation could be yours.