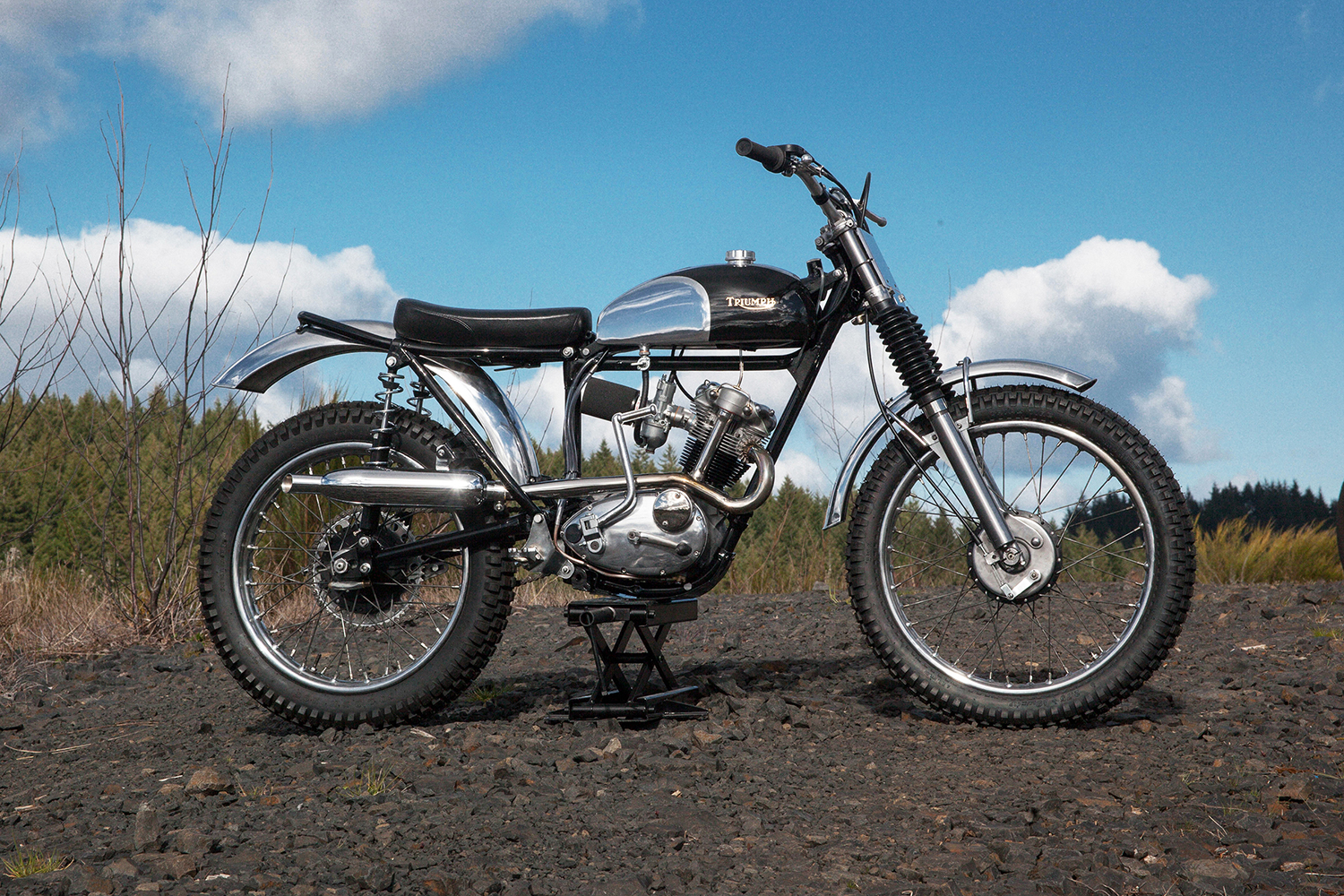 The Portland-based outfit Red Clouds Collective is known for their bespoke high quality American-made clothing and accessories. They also dabble in building motorcycles and have acquired quite the collection over the years, with the same attention to detail and build quality that you’d recognise from their garments. They were itching to start a new project and, as luck would have it, one of their friends found an old gentleman with two Triumph Tiger Cubs in a barn, both left sitting in a dirty corner for decades. They decided to make the man an offer. “I traded some of our work pants we make, plus cash, for a bike with no seat and the whole left side covered in old mud,” recalls Seth from Red Clouds Collective. Even though the bike was in bad shape, Seth saw the potential in the little Tiger as being the perfect donor for the vintage trials bike he’d always wanted to build.

After getting the Cub back to their workshop, the first job was to see if they could get it running. “It took about three days to get it running,” recalls Seth. “Once I got it started, I then took a step back and realized what a mess the bike was. The original Tiger Cub tank had about a gallon of bondo on it, it didn’t have a seat, the exhaust was completely rusted with some crazy silencer on it, and it had a sissy bar – plus the tires were dry-rotted from sitting for so many years.”

Once the little cub was running, Seth took it for a burn around the neighborhood. “I realized the few inches of travel in the suspension were not enough. I wanted to have way more fun on this thing and I knew I would need more travel. I noticed some modifications would be in store if I wanted to fit longer rear shocks, so I started to take the bike apart and the process of building the ‘Catamount Cub’ suddenly began.”

As the tank was past its use-by date, Seth started sourcing a new one that would allow him to add a top tube to the frame. The new top tube could act as the oil tank and that would open up the area under the seat. After finding the perfect tank, he soon discovered that there’s a whole world of Triumph Tiger Cub aftermarket parts for turning them into trials bikes.

Next on the list was changing the riding position to a more trials-like stance. The foot peg location and mounts were removed and new brackets were used to bring the foot pegs back a few inches on the frame. A new rear brake pedal was mounted to work with the new peg placement. The rear shocks were originally 11.4” long; new 15.75” gas shocks added the travel clearance Seth wanted. New Renthal Trials Bars were added and polished alloy mudguards were mounted to the front and rear. The old carburetor was replaced with a new Amal MK1 and a Domino slow-action twist throttle.

It turned out the top end was heavily worn, and the barrel had extremely deep scratches. Unfortunately, it had been bored to the max, but Seth found a used top end online and fitted a new piston and rings, along with new gaskets for the entire engine. The whole top end was vapor-blasted, as was a handful of other parts, and everything else was restored to a beautiful shiny polished look. Seth painted the gas tank to have a very classic Triumph look and feel, leaving the majority of the tank polished, but painting the sides black with a gold Triumph logo.

Nearly every nut and bolt on the bike has either been modified, replaced or restored. “I have had a blast working on it as I dreamt of testing the limits of riding this machine that is now over 50 years old,” says Seth. “I love how lightweight it looks and actually is. It is stripped down to its bare bones and modified to ride and jump over all things in its path.”

Unfortunately, Seth won’t be riding it again for a little while as it will be proudly displayed at The One Moto Show in a few weeks. “It’s so hard to wait until after the show before riding it. I know I’m going to have too much fun riding it and I’m sure I will drop it a few times, so being responsible with a freshly-built trials bike is the hardest part of this build.”