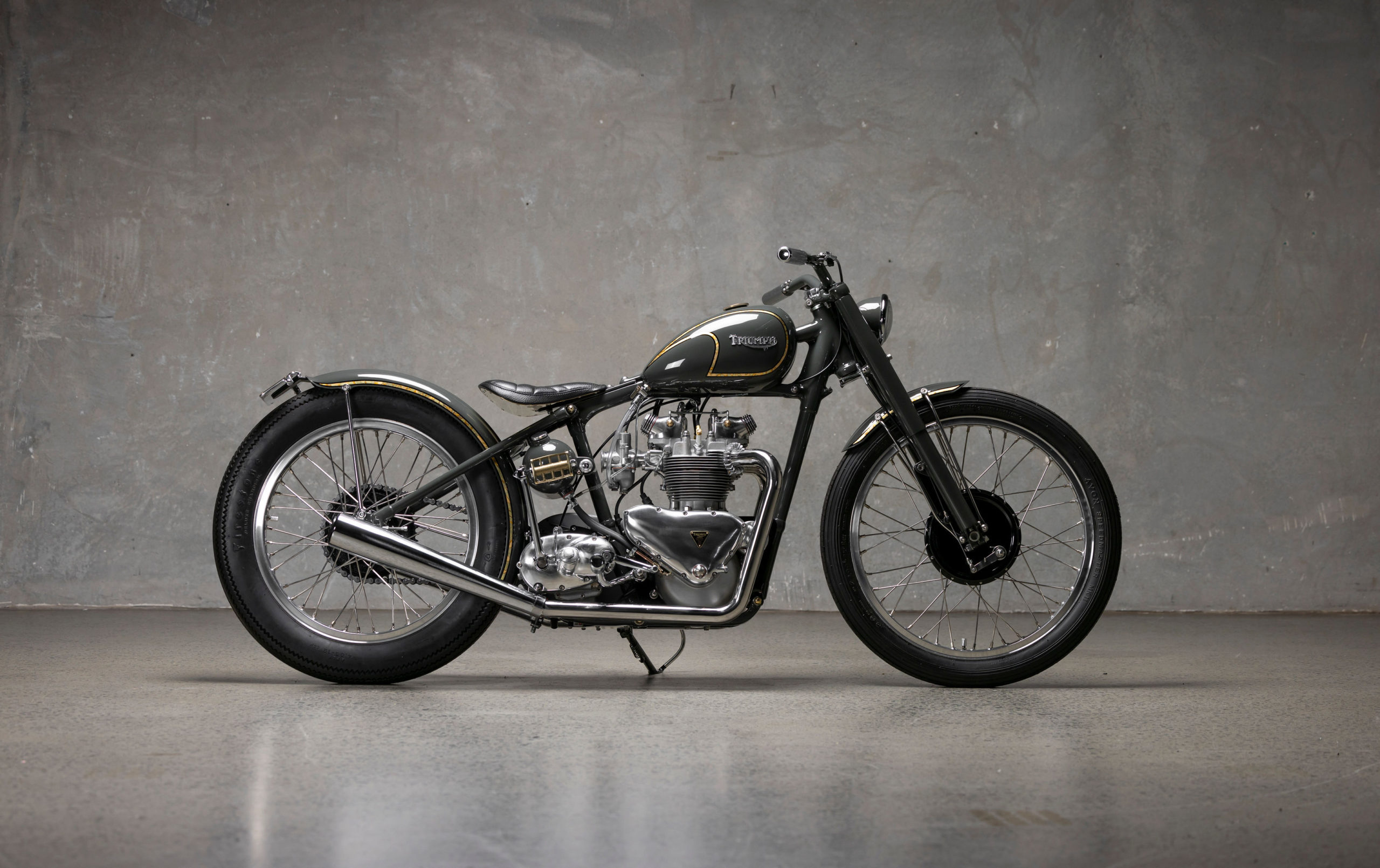 For a bike that was originally built to be a comfortable road machine with the ability to be an excellent trials competitor, the Triumph TR5 sure makes for one cool custom candidate. The rebel without a cause, the young heartthrob who died too soon, James Dean had one that he tricked out, so too Fonze from Happy Days, with a bobbed fender and high bars. So, it should come as no surprise that those who value a sweet vintage machine still often opt for the British beast. One such Aussie had a very unfinished project on his hands, so to get his TR5 turned into a beautiful bobber, he called on two of the country’s best builders, Noel from Black Cycles and Justin from Pop Bang Classics, and the result is an instant number one hit.

The bike’s owner is from Sydney, while the two expert builders hail from Queensland and infuse the best of the sunshine state’s attitude of enjoying a good Sunday ride into their builds. As Justin explains, “Noel from Black Cycles was sitting in my shop while I was wiring up one of his builds when he gets a phone call. After some back and forth the calls over and a text msg comes through. He shows me an ad for a rigid Triumph project with an all-alloy TR5 motor. The man on the phone, Ben, just asked him if he could work his magic on such a thing. Being a classic Triumph, Noel asked if I could lend a hand with some design and mechanical.”

Artistic collaborations can be a tricky business, but Noel and Justin both know their strengths and like Lennon and McCartney, only make the other’s work even better. So the engine and gearbox would stay with Justin, and Noel took the rest of the bike back to his Black Cycles shop. The alloy engine was a first for Triumph, having developed the technique during the war effort and Justin knows how to screw these old bad boys back together so that they run better than ever. First, he stripped the whole thing down and wet-blasted the alloy parts, while the shiny bits went back to Noel for polishing.

The twin cylinder engine has been rebuilt back up with Justin dropping in new barrel liners and an all-new set of pistons. The conrods are changed for items that allow a new bearing, a common swap on these engines, and the valves and guides have all been replaced too. Then Justin made another clever change, “I modified the engine cases, before the rebuild, to run a seal on the drive side of the crankshaft. This allowed for a dry primary drive. I replaced the old single row primary chain with a heavy-duty 428 o’ring chain to keep it running smoothly.” For excellent cog swapping, he also rebuilt the gearbox with all new bushes and bearings.

The standard primary cover was fairly knocked around, which gave Noel the perfect excuse to customise it, adding a bunch of brilliant touches that perfectly fit with the theme of the bike. Time to get things rolling and the front suspension has been rebuilt, lowered and fitted with a stunning set of Britcycle fork covers. The original wheels were to be rebuilt, but instead, Justin built these beauties measuring 19xWM2 rear and a 21×1.65 front and wrapped in vintage rubber. Meanwhile, Noel made the front fender from scratch and like the rear, it features gorgeous stainless steel struts, while also finding time to make the battery and electrical boxes and a host of cool aluminium features.

With fabrication in full flight over at Black Cycles, the frame was modified so that the solo seat could sit on a leaf spring that is then upholstered in the style of the Union Jack. Truth be told, the stock tank isn’t a looker, a fate shared by similar Matchless and Norton machines of the time, so on goes a brilliantly modified peanut tank with a Motogadget Speedo frenched in. “The handlebars were one off with an internal throttle, incorporated levers and mini push buttons.” With all the fab work done, Noel then prepared, primed and sprayed on the stunning paintwork, an olive green grey with a hint of pearl.

Winding up the collaboration to ten, Justin then took out his paint gear to apply the picture-perfect gold leaf with black pinstriping, before adding a few more layers of protective clear. The TR5 was changing hands many times over, but it was getting more incredible with each move and it was now time for Noel to piece everything back together. Part of that process was to craft a brand new exhaust, and the twin pipe system made from high-end stainless steel is a piece of art, perfectly following the lines of the bike rearward and even the choice of mufflers is absolutely spot on. The guys were clearly pushing each other to their best and Justin was about to give the electrics the first-class treatment.

“For charging, I used an Alton alternator to replace the old generator. It’s also fitted with a dummy Lucas K2F magneto housing which actually holds a Vape electronic ignition, that runs up to a dual lead coil hidden under the tank. I made up a small loom that runs through the frame from the headlight to under the gearbox to keep everything hidden.” She might be an old girl, but with trick ignition, 12v charging, that 21st-century tech speedo and the final addition of a Kellermann all-in-one taillight combo, it has the very best the modern world has to offer.

The finished bike is one of the best builds the guys have turned out – which is saying something given their combined portfolios – but a vintage British bobber this good really is one of motorcycling’s greatest joys, and we can’t wait to see Black Cycles and Pop Bang Classics turn out another major hit.