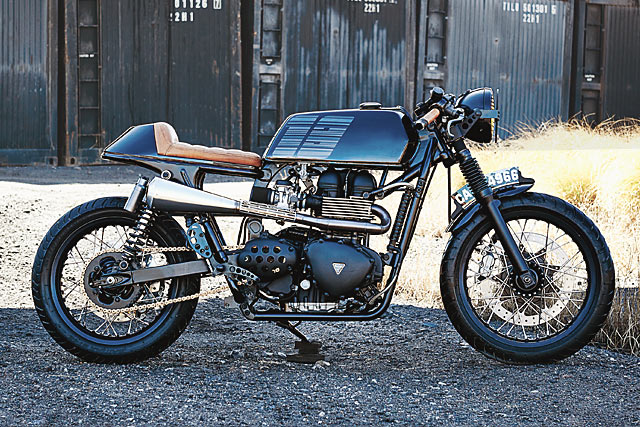 True creative freedom is a wonderful thing. And while many of us may work in ‘Creative Industries’, it’s actually quite rare to be able to ignore the maddening crowds and do whatever the hell you want, while also getting paid for it. Successful artists do it. Top architects do it. But rarely do bike builders get the chance. Mostly, it’s all about working with the customer to reach a ‘mutually beneficial outcome’ rather than going buck wild. But not for Hutchbilt’s latest, a black and tan ‘07 Triumph Thruxton they call ‘TT13’. We caught up with Jeremy Hutch, the shop’s big cheese, so he could explain just why he was let loose without a brief. “My client, good friend and photographer Adrian Nakic brought me his 2007 Triumph Thruxton which he wanted made into a unique, one-off cafe racer. His brief was simple. ‘You have free rein,’ he said.” So with the brief of a lifetime and with this being Jeremy’s first Triumph build, he really wanted to create something classic-looking in a cafe style, but with modern power and handling. No doubt he wanted him mate to be blown away, too. To get the creative juices flowing, Jeremy reached way up to the biking world’s toppest most top shelf. “My inspiration came from the Isle Of Man TT racers from the ‘70s,” he grins. “It was an amazing decade for bikes. So I set about emulating this era with modern technology in a fully street-legal rocket ship we named the TT13”. Hutch found a decent ‘78 Yamaha XS500 gas tank in an old bike yard, which was cut and reshaped to fit its new motorised home snugly. Far from a random decision, Jeremy says that he really liked the shape of this tank, as he felt it its lines were perfect for the look he was after.

With the tank calling the shots of the bike’s overall flow, the corresponding butt piece and seat pan was handmade by ‘Tallies’ (a.k.a. Obi 1), his fabricator, to house the Antigravity battery. With that process underway, Jeremy cut and modified the rear subframe to hide all traces of unsightly wiring as well as to house the rear LED tail and running lights. Then came the bounce. “The Bitubo fully adjustable rear suspension upgrade and the complete rebuild on the front suspension got the TT13’s stance just right, and it gave us some massive handling improvements as well. We then added Brembo brakes with Newfren brake rotors front and rear, and shod it in Bridgstone Battlax rubber. The billet cafe rear sets are from Free Spirits in Italy, which I then had anodised black. These look great and are a super light alternative to the existing OEM units.” The engine was then ceramic coated and given far more air via new Uni air filters. Some killer stainless exhausts where then handmade by Reynard Schonken from Scorch, which upped the horse power considerably but still kept the regal Triumph looking classy. All that extra oomph is then delivered seamlessly to the rear by the EK X-Ring chain. All the bike’s new electronics were supplied by Motogadget, and were tucked away under the gas tank. There’s a fuss-free RFID keyless ignition system with Motogadget M-Blaze bar end turn signals and Brooks leather-bound grips. And to judge the bike’s current state of lawlessness, a Motogadget Motoscope Mini speedo was sunk into the top of the headlight.

“Motogadget also took care of the bike’s lights via a Dual M Switch Mini Controller,” says Hutch. “Wiring harnesses are not my strongest suit, so as always my good friend, the very talented Alex Stoos, helped me out to get all the Triumph’s systems firing on point.” “The front headlight grille, mounts, clip-ons, front license plate holder and the gas cap were turned by my go-to engineer, Ian Ketterer. The leather seat was hand-stitched by Nathan’s Upholstery in some thick Nubuck leather so it will age like a cool old baseball mitt. Then my painter, Jeremy ‘Mad Skillz’ Nolan, nailed the paint job with a silver and gunmetal fade on an onyx black base.” Jeremy reports that the Hutchbilt Triumph’s power delivery is bang on, too. “It doesn’t want to give up until you’re forced to tap out. It just keeps pulling until you run out of road. It’s just so good having that G-Force on tap whenever the opportunity presents itself.” Cheers to that. And cheers to some real creative freedom, too. Because there’s nothing quite like going a little creatively buck wild once in a while.