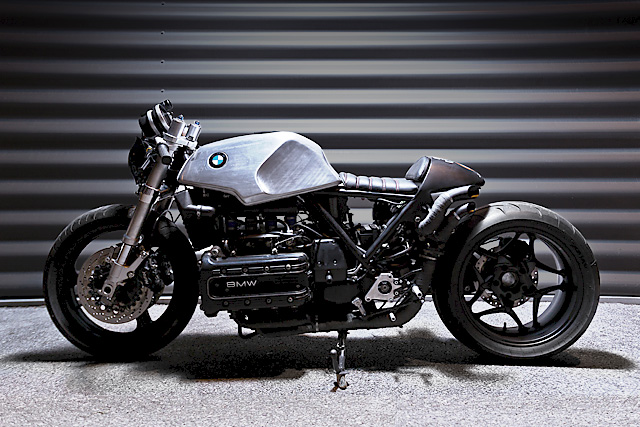 That famous line uttered by Catholic Priest Patrick Peyton quickly had a word change when it entered the common vernacular and has become an old adage in the motorsport world, “The family that races together stays together”! There are plenty of legendary racing families across all forms of motorsport who have found a second home at the race track. For the Vuilleumier family it’s a tale that spans three generations and three continents, with each new-born starting as early as four years old working with the race team and getting an education that can only be attained in the endless battle for the winning edge. Today we find them operating as a father and son team, the owners of Switzerland’s JV Performances, a shop that specialises largely in BMW motorcycles and has unveiled their latest track weapon, an early 90’s K1100LT Tourer, come stripped down and boosted drag bike. The Vuilleumier family story begins with Grandpa George who owned a motorcycle garage in Colombia where he would train his son Jorge in the art of motorcycle and race car mechanics. Jorge took to bikes like a duck to water and in his youth was a Colombian National Champion in Motocross and spent his weekdays in the shop, while racing on the weekends. When Jorge’s son Giorgio was three months old he moved his young family to Miami, Florida, where he continued to race dirt bikes and also took to four wheels drag racing American muscle. But when Giorgio was four they made one final big move to Europe, where “my father still races in Motocross and in Supermoto,” Giorgio explains. “He worked 10 years in a BMW bike shop as a mechanic and in 2004 my father decided to create his own garage. This was the beginning of JV Performances (Jorge Vuilleumier Performances),” a business that Giorgio, a recent mechanical engineering graduate has joined “repairing, modify, restoring and doing the maintenance on all sorts of bikes, but particularly BMW’s, we also modify and restore American muscle cars.”

time they got their drag racing groove back on and it was precisely because it’s such an unlikely race bike that Giorgio felt it had to be done, R series bikes have become the norm. “I said to my father, hey why don‘t we do a drag bike with one of those bikes, to participate in an event like Glemseck or Wheels & Waves”. But before they could compete racing they had to build the bike and with the big LT tipping the scales at 290kg the first step was to put it on a serious weight loss program. The bike had been sitting outside for four years prior to work commencing so there was some extra wildlife and leaf matter to be removed but with the big touring fenders and plastics off the potential was there. The bike was then taken back to the bare chassis so they could get the stance long and low for the perfect drag bike set up. The long telescopic forks were swapped out and replaced with Suzuki TL1000 43mm inverted items that were further lowered through the triple trees. The Suzuki also donates its big twin disc front brake setup sporting four piston calipers and with a set of clip-ons bolted on the low slung look gave them all the inspiration they needed to visualise how the rest of the bike should be. Rather than bolt the K series swingarm and rear end assembly back on they ditched it for the more user-friendly R1200 and now knowing it would fit it was removed for Giorgio to work his magic. He’d come up with an idea while restoring an old BMW R25 with his Dad, he wanted to recreate the look of the exposed driveshaft but on a modern bike. Of course his Dad and Grandpa thought he was bonkers but determined to prove them wrong he cut up the R1200 swingarm assembly and got to work. The swingarm now gives the bike 150mm more length in the wheelbase for better launches and with some brilliant engineering the driveshaft is now exposed between the pivot point and drive hub and all can see it spinning as it fires down the track. To improve the chassis performance Giorgio also converted the rear end to a central mono-shock setup over the original side mount to give improved control when setting the bike up. Having built such an incredible chassis both in looks and track prowess it was time to turn up the wick on the engines performance, “we have to install a power adder, so we looked in our garage at what we have. We had a root style compressor and a turbo that was fitted to a Mitsubishi.” An old roots blower certainly would give a cool drag racing feel but actually making it work could ultimately prove fruitless and the turbo option gave more scope for future improvement. Where exactly to mount the turbo became a bit of a problem but the Vuilleumier finally settled on locating it behind the rear suspension, just in front of the rear wheel. With it held in place they were able to mock-up both the exhaust tract to feed the turbo and then a new inlet manifold to dump the boosted air back into the engine. Back on the bench where they do their best work father and son fabricated a beautiful array of pipe work and plenum, meticulously welded together and designed to take the shortest path to each location. The turbo now draws air through a pod filter that extends out from under the seat on the right side of the bike, while the turbo vents the exhaust gases to the atmosphere thanks to twin baffled pipes that match the contour of the rear tyre. The inlet tract is more direct, heading straight from the turbo through the new pipework into the engine with silicon hoses mating up to each chamber and providing some flexibility to the pressurised system. The headers were fabricated from scratch with a merge collector feeding the exhaust gas of all four chambers into the single turbine, while heat wrap ensures greater gas velocity helping the turbine spool up faster at lower rpm. With the complex turbo system taking up a lot of room the wiring loom had to be simplified and the ABS was deemed unnecessary with its complex componentry given the heave-ho. With the wiring hidden and the battery relocated the final piece of the puzzle could be assembled with oil lines run in the most direct route left available to prevent starvation to the centre housing that holds the all-important bearings. To feed the fire the original fuel tank was retained but it is the only piece of the enormous OEM bodywork that has been returned to the bike. Before being fitted up it was stripped of the old factory paint and hand-sanded to give a neat brushed finish, with the company logo and new BMW badges the only additions. The seat could have been a more stripped down affair but wanting to ride on the street and not just the 1/8th mile called for a little more comfort and the cafe racer styled rear hump sits neatly on the modified rear subframe. It’s padded on the hump for when the throttle really gets pinned and the main seat cushion is black leather with red stitching. The front end features a helmet visor as a wind deflector, but dominating the landscape is the huge AutoMeter tacho and shift light combo that the lads lifted from their own ’79 Corvette. New grips are about the only addition to the clip-ons and again showing off their fabrication skills the father and son team made a set of rearsets and custom mounts to match the laid down drag racing riding position. Having stuck to a standard front wheel up front that fills the space nicely and provides the skinny tyre look, the rear is the total opposite with a K1200 unit allowing the fitment of a big 180 section tyre. With the build completed the once was a tourer come drag bike fired right up and all the planning and design paid off as everything on the BMW functioned exactly as it should. Now all that is left for the JV Performances duo is to head to the track, lock up the front brake to build boost on the line and fire the K1100 down the track like an Exocet missile for that winning feeling three generations of Vuilleumier’s have come to enjoy.