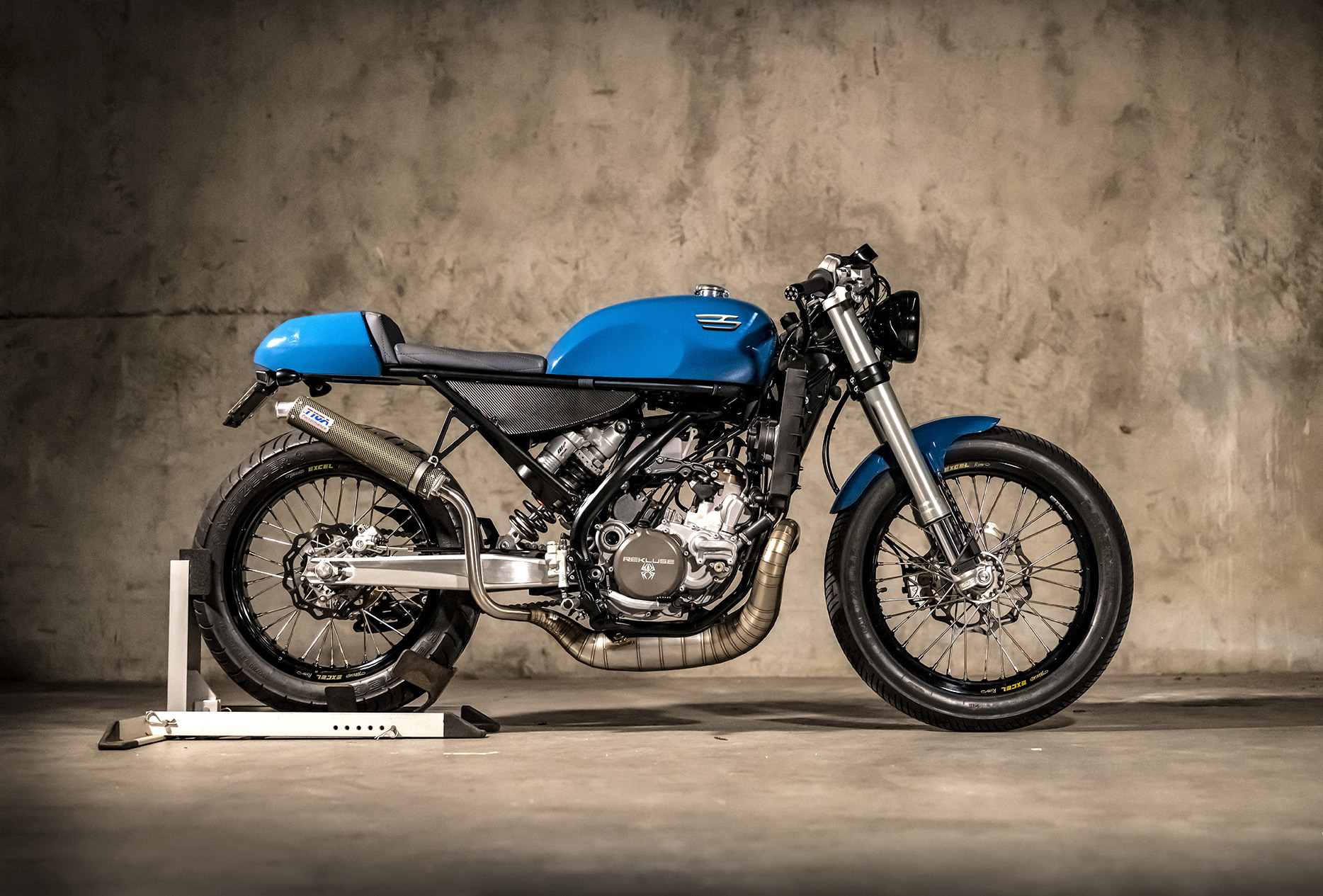 Australia’s SALT Motorcycle Company have it figured out. They know new road bikes are as refined as they are boring. Which is part of why they’ve built this; a gnarly cafe racer based on a KTM 300 two-stroke weapon — a wild, raw ride that harks back to the halcyon days of motorcycling.

Based in Brisbane, SALT are set to fire up production in 2021, with plans to build bespoke road-legal racers utilising repurposed Holden machinery.

Which is great news for fans of the golden era of motorcycles — of cigarette sponsorships, grid girls and bikes that reek of two-stroke oil and poor decisions. Motorcycles that were good looking, light, and impossibly fun to ride.

So no stone has been left unturned when it comes to making KTM’s iconic enduro turn corners as well as it turns heads.

“Our bikes are about the rider, the motorcycle, and the road,” says owner and founder Brendan James. “Using modern engineering and design, we hope to reintroduce riders to the pure analogue feel of motorcycling.”

That feeling starts with a factory-fresh KTM 300 EXC, which has been further tweaked with a TSP cylinder head, ECU and Rekluse autoclutch. Combined with a tuned stainless exhaust, the cafe racer now punches out 34.5ft-lb of torque at 7,000rpm and 52HP at 8,500rpm — figures that prove that any more than two strokes is a wank.

But all that performance would be pointless without a chassis and suspension setup to match. And SALT have it sorted, with input from ex-500 GP rider and Chief Development Officer Paul Lewis.

So the subframe has been rebuilt and strengthened, with 19” front and 18” rear Takasago Excel rims fitted. A simple four pot Brembo single disc arrangement at the front and two pots at the back end helps the Cafe Racer to stop as quickly as it can take flight.

Keeping it all under control is a heavily tweaked set of WP forks and rear shock, set to perfection by Queensland gurus MPE suspension, who worked their mastery on this incredibly light throwback racer.

And we do mean light. A whole host of carbon fibre bodywork and with a hand-crafted aluminium tank, SALT’s creation tilts the scales at a mere 245 pounds (111kg).

Rounding it all out is a suite of clever Motogadget electronics, with an old-school analogue tachometer sitting between mid-rise clipons. A pair of midset foot controls help the rider adopt a sporty, but not back-breaking crouch.

And if this all sounds tempting, you’re in luck. Because SALT can build you one of these little racers, with paint and upholstery to spec, for the princely sum of $39,990 Australian ($29k USD). That’s no small amount of money, but this kind of work — and this kind of performance — never comes cheap.

And hey, that’s what kidneys are for, right?