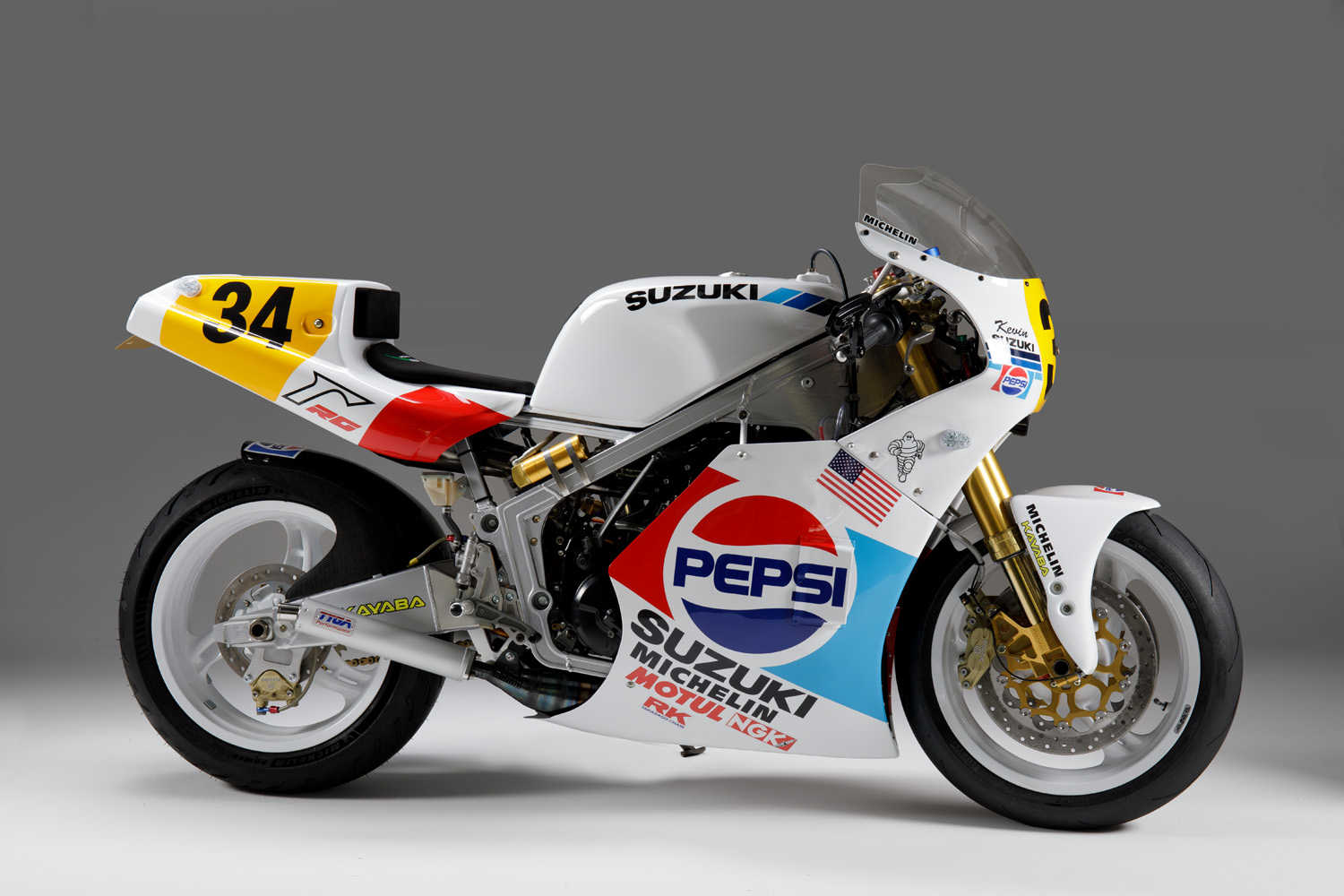 From the ancient cultures of Southern Africa to Egypt, Greece and China, there were mythical gods, hybrids, that combined the power and mystique of one animal with another, or even a human, to create a creature of supernatural ability. Those like Minotaur and Pegasus live on in our modern folklore and remind us of the reverence humans have always held for incredible hybrids. Now in a modern tale a new beast comes to life, forged in fire, it’s half raging two-stroke screamer, half exotic Italian and just for good measure has a little GP race pedigree thrown into the mix. Built by Mark Haywood in Brisbane Australia, this Suzuki RG400-Bimota cross has us ready to worship at its almighty altar.

To understand this wonder on two-wheels first you need to know a little about Mark’s background, a fanatic of petrol power who has been building bikes forever. “I am a Spray Painter by trade with 40 years industry experience. For the last 21 years, the world’s largest paint manufacturer has employed me as a Technical Training Manager. I started riding bikes around the age of 12. My first bike was a Puch Maxi! We would seek out junk bikes, strip them down and ride them on common land back in the UK.” So when he’s not working, he’s either knee down on track riding a BMW S1000RR or building bikes, dirt and moto-x machines, concourse restorations and serious street bikes.

When it comes to the RG build, he gives us the background, “Many years ago John Boyd, an avid collector, importer and hoarder of all things bike related, conceived the project and started to acquire the various parts needed starting with a low km crashed RG400 imported from Japan. There was a period in Bimota’s history when due to the company being bankrupt, they were sending completed bikes to dealers to be stripped for parts. John just so happened to have a zero k’s Bimota SB8R minus an engine and it was decided to graft the two bikes together, wrap them in RG500 GP race bodywork and paint it as a Pepsi replica.”

Gun fabricator Nick from Nicom Engineering got 80% of the fab work done, before returning to the UK and the project sat idle for a few years. As luck would have it, Mark was building a stunning factory HRC RC30 Endurance bike for collector John and the RG became the payment for the build. But again the bike sat idle, Mark busy with work and a host of other builds, then he took time one day to really study the quality of work done so far and knew it couldn’t remain unfinished! “First thing was to finish the fabrication. This was all minor stuff really, as Nick had already completed the bulk of it.”

With the foundation of the bike completed, it was stripped down to every last piece and a host of new parts and pieces ordered so that the bike could be built back up. Getting the bike rolling are some of those exquisite parts from the Bimota, the gold USD forks are fully adjustable and are held in place by a glorious set of exotic Italian triple clamps. At the end of the legs are Brembo calipers to make braking a breeze, with plate size rotors measuring 320mm soaking up the hard stops. The rear end is equally as impressive, the tyre planted and controlled by Ohlins finest piece of kit from the time.

The RG400 engine, the little brother to the big 500, is a liquid-cooled square four-cylinder two-stroke (397cc) that screams its way to 9,000 RPM. “I discovered the motor had been ported at some stage in its life so that was going to be interesting,” Mark smiles. With the only choice to go back to stock jetting and work from there, taking his time until the tune was spot on. And you can just imagine the smell and the sound coming from those four stunning expansion chambers, with two Tyga performance pipes venting out the sides and a pair of carbon units belching the blue smoke out the rear.

With the orchestral symphony of an ’80s GP paddock as the soundtrack, the bike needed the look to match and the Pepsi/Kevin Schwantz livery was really the only answer. So on goes a full set of race fairings from the big 500, along with a carbon hugger that is bolted to the uber slick swingarm. “The part of builds that I do not enjoy is the painting, not surprisingly, that is what I do most,” Mark tells us. But despite how he feels about the process the results are simply incredible. The detail is first class, the finish like glass and the graphics transport you back in time to a place of fond memories with the same magic of a celebrated work of art.

There was more work to do, however, an integrated STACK tacho, lap timer, speedo and other pieces integrated into a Suzuki main loom, then connected to Italian switchgear, before getting the aftermarket lighting to work; somewhat of a major undertaking. But work it does and those functional parts take nothing away from the race bike finish. “The bike is really light and handles great, the riding position is also surprisingly comfy for what is essentially a race bike.”

The machine has now been sold to a gent named Tom who has since commissioned another build from Mark. A masterpiece we cannot wait to see, but for now, drink in the magic of a hybrid wonder beast that is ready to roar on the Australian roads.