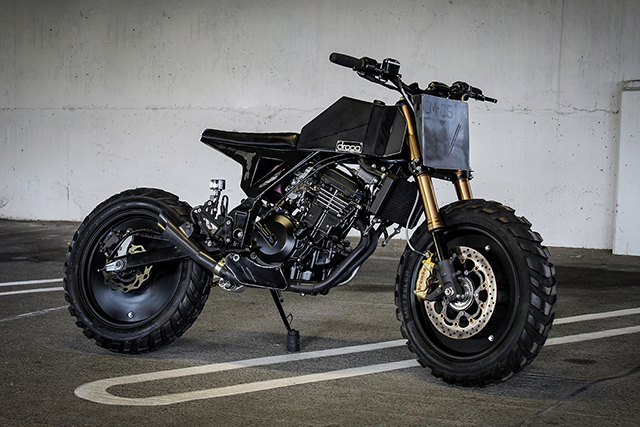 Since 2016, husband and wife team, Max and Erica Droog have been building custom bikes under the banner of Droog Moto. The Washington-based shop is known for its signature take on the post-apocalyptic look, with customs that can be best described as modern, doomsday-ready street fighters with a dash of scrambler flavor. For its latest build — dubbed “DM-015 The Urban Fighter” –– the couple has once again set its sights on Kawasaki’s Ninja 250R — Team Green’s longtime entry-level staple of a sportbike. 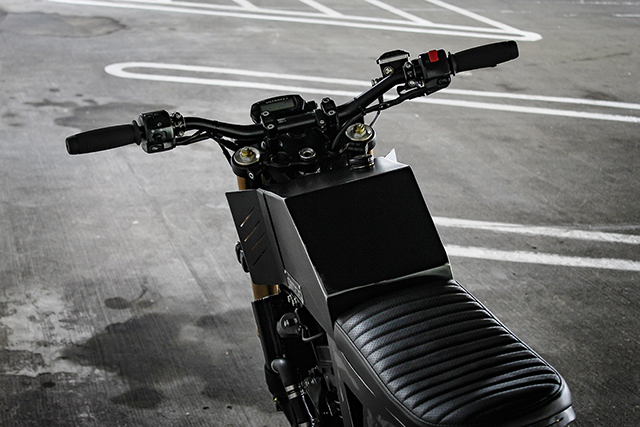 Kawasaki first introduced the Ninja 250 back in 1986 and it would go on to quickly become one of the firm’s all-time best-selling models, remaining in production for over a quarter-century before eventually being replaced by the larger Ninja 300 (and then Ninja 400). With little in the way of competition, legions of riders began their motorcycle careers aboard these nimble and affordable little runners. While the model performed adequately for a 250, it went largely unchanged for several decades and by the mid-2000s, left a lot to be desired in the looks department. However, where others saw a bike with dated-looking bodywork (originally styled after the ’88 Ninja 750) Max and Erica saw a blank canvas. 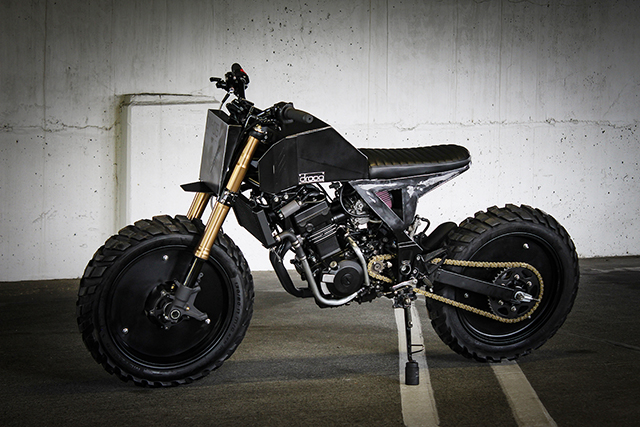 The shop started by pulling the liquid-cooled parallel-twin from its frame which was then modified. A new subframe was fused onto the main chassis so the two structures are now a single piece. The 250’s stock 37mm telescopic forks were then swapped out for a beefy inverted front-end off of a Hayabusa, complete with adjustable internals. The rear suspension was also upgraded, and stopping power now comes from a single four-piston Brembo unit in front and a smaller waved rotor in back. 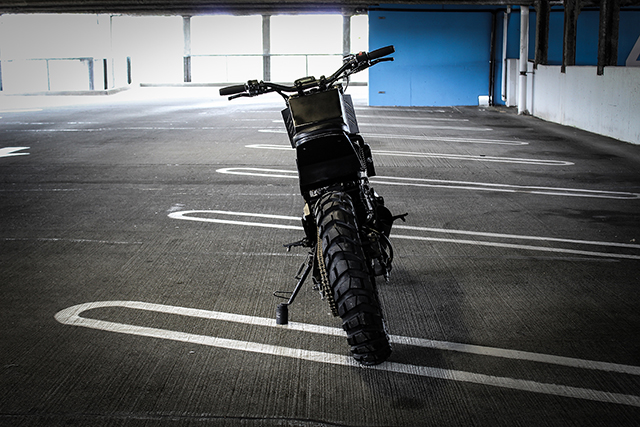 The factory fuel-cell was ditched for a blocky, one-off steel tank sporting vented panels that protrude forward, partially wrapping around the back of the fork tubes. Out front, the bike’s received Droog’s trademark tracker-inspired number plate with dual LED light bleeding through a pair of offset diagonal slits. The cockpit is comprised of a set of Droog’s DM fat bars, aftermarket grips and levers, and a Trail Tech mini digital speedo, replacing the analog cluster and keeping the setup nice and tidy. With rejetted carbs, K&N pods, and a custom full two-into-one exhaust system terminating in a slash-cut silencer (with removable baffle), the Ninja 250’s DOHC twin is now said to make 36hp — a healthy bump over the stock figure. 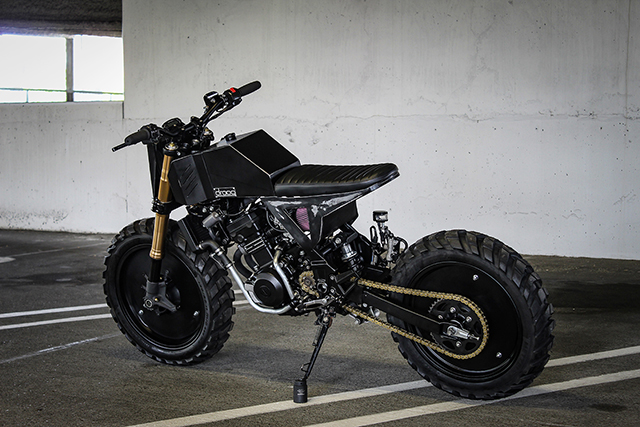 Other Droog hallmarks found on the quarter-liter Kawa include an LED strip taillight integrated into the back of the subframe, low-profile leather seat, a stubby four-inch front fender, the shop’s aluminium wheel inserts fore and aft, and chunky Metzeler Karoo 3 tires. Finishing touches include a Rizoma NEXT reservoir, a custom slit exhaust heat guard, and a lightly patina’d matte black paint scheme. 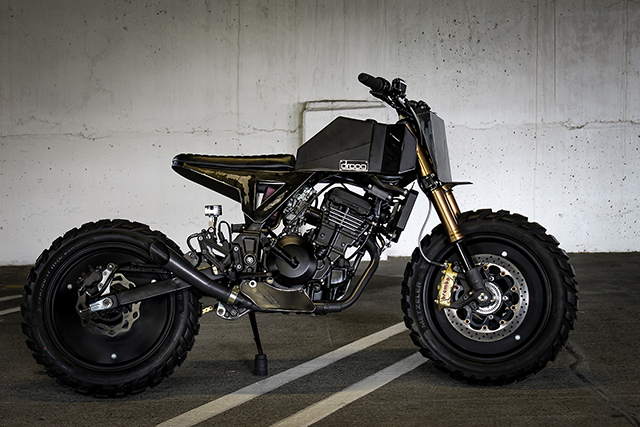 Like the rest of Droog’s bikes, the DM-015 is likely to inspire a love-it-or-hate-it reaction from most that lay eyes on it. If you do happen to be in the camp that fancies Droog’s post-apocalyptic vibe, the good news is the Urban Fighter is currently for sale on the outfit’s website. The DM-015 is far from the shop’s biggest, baddest, or most powerful build, but it’s got enough get up and go to take on most city streets, and like they say, “it’s more fun to ride a slow bike fast than it is to ride a fast bike slow”. 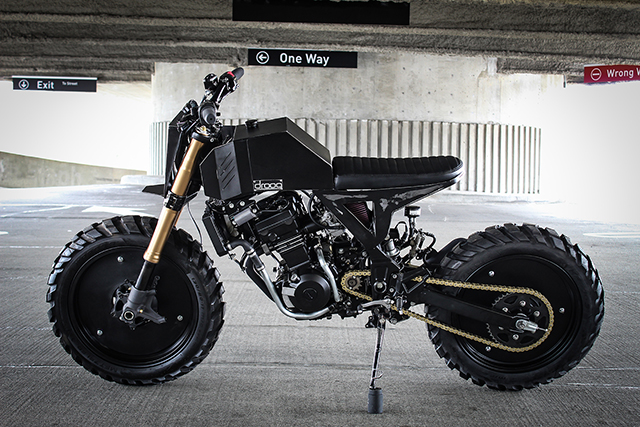 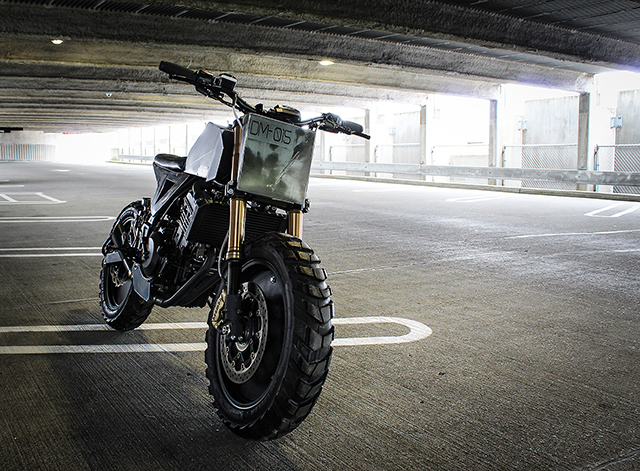 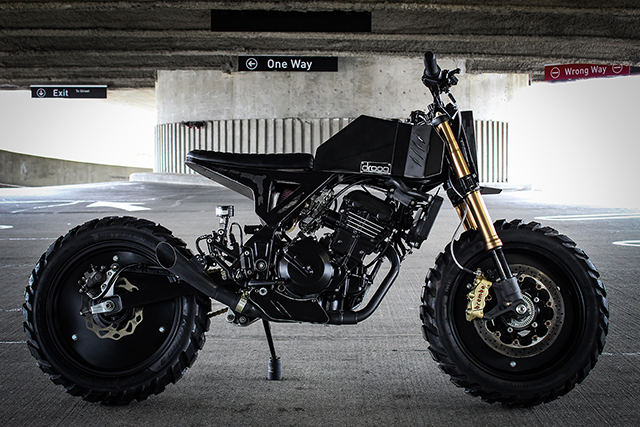 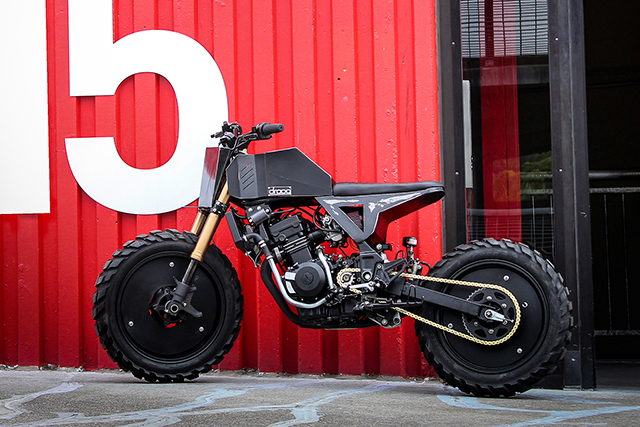