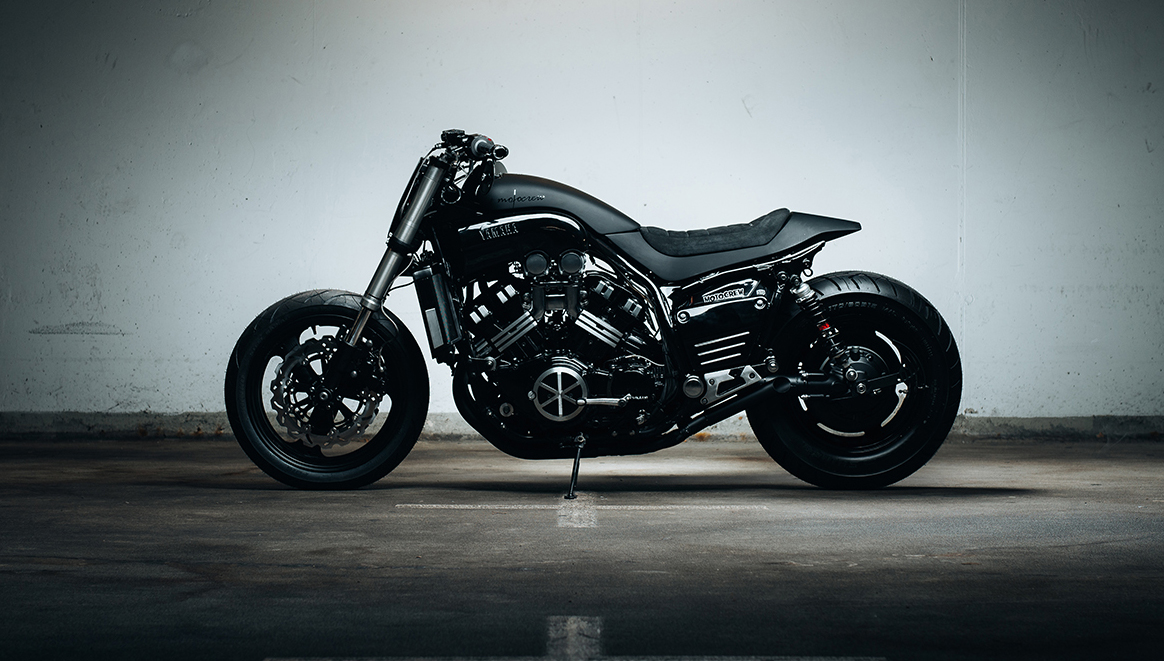 You meet all kinds of people in the custom bike scene, its part of what makes it so fun, the characters can be as cool as the bikes. But when you come across a rider whose full-time job is working as a solider and happens to fight MMA inside the cage in their downtime, you can hazard a guess that they don’t ride a Vespa! It’s a personality type that Firefighter and bike builder Chris Scholtka can relate to and for his combat-ready client, he knew just the bike to build. From inside his Motocrew workshop in Germany, he’s rolled out a bucking beast, a 1998 Yamaha V-Max that’s ready for urban warfare.

A soldier who is also well versed in the martial arts makes for a killer combination, quite literally and in many ways, the V-Max provides the same traits in the motorcycle world. It looks tough just standing still and the urban brawler packs a punch that will knock just about anything out in a straight line duel when the light goes green. This is seriously impressive for a machine that’s basic bone structure dates back to 1985. A time when it made such an impact it was Cycle Guide’s bike of the year, but it wasn’t without some criticism.

Chris’s client really only had one request, the bike had to be a badass! Which is perfect given this is just the kind of build that always rolls out of the Motocrew workshop. The design would slowly take shape as the bike was built, but one thing Chris knew he’d have to address is the Yamaha’s deserved reputation as a shoddy handling bike. But where it really shines is the brute horsepower the V4 engine provides and the stumping pulling torque that makes tyre shredding fun only a throttle twist away.

The donor bike was in fair shape, but Chris would make sure that every part that went back on would be in first-class condition; it’s just the German way. Having ridden the bike he felt the handling could not only be improved but that by also pulling some weight out of the machine it could really take on a whole new appeal. “I call it an urban tracker because if u can handle it, you can ride it with flat track style around the streets and rubber some tyres down,” he smiles. To make that possible the sloppy standard forks and springs all got tossed aside.

For the front end, Chris selected a set of forks from a sportier Yamaha, the FZR1000 and tells us the conversion to the USD units was relatively straight forward. Not only do they improve the front end feel, but look significantly tougher than the stock conventional setup. All rebuilt they’re pieced together with blacked-out triple clamps and the FZR wheel also joins the party. With a heavy bike capable of some serious speed Chris also swapped over the sportbikes brake setup and switched the discs for wave pattern pieces.

Getting the rear to hole shot and handle, a set of adjustable YSS shocks helps the big rear tyre to do its best to tame all that torque. The tyres themselves are from Shinko and to keep the strict authorities happy, a letter from the manufacturer was required to finalise registration. What they didn’t need to be told was just how good the aesthetics of the bike are, with the entire back end crafted by Chris. First using metal rod and tape to get the shape he was after, before bending and welding metal till the flowing finish was achieved.

He even made the seat itself by hand and with the fuel tank below, cleverly retained the ‘click’ to open design, so the filler can easily be accessed. The lines flow beautifully up to the faux tank cover and the front end wears a Husqvarna number plate with recessed LED light to shine the way. The paint scheme is the perfect combination to truly capture the badass vibe, neat graphics, matte on the bodywork and the frame itself finished out in black gloss.

Unsurprisingly the V4 engine with its 115nm of torque needed a new clutch and the blacked-out exhaust with baffled slash cuts add a few extra ponies. But this is just the system used to pass registration, a new setup is in the works! The detailed touches on the bike, however, are already flawless, with Domino grips, Motogadget lights and a host of new braided lines. With the taillights in the frame ends and an axle mounted number plate holder, the rear end is all rubber. The perfect view to give challengers at the traffic light GP, as the man with a license to kill blows off a little steam on his violent V4!