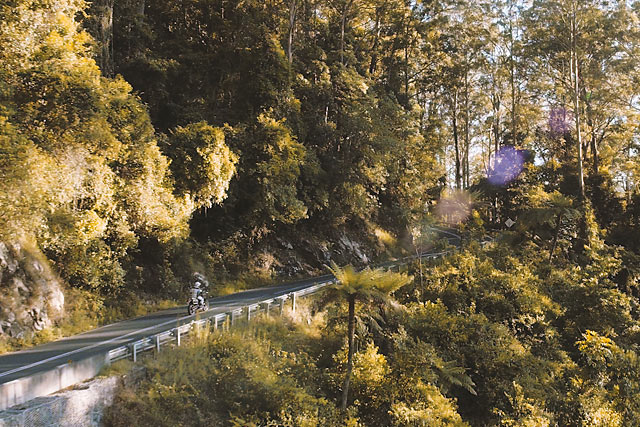 Here’s the next episode of our ‘Roads We Ride’ series we’ve made with Cam from Stories of Bike and Transport for NSW. Last time we took a little diversion and looked at riding in Sydney. Now, back to the classics.

Nestled in one of the greenest parts of the country is Dorrigo and the beautiful Waterfall Way. A 42 km stretch of road running west from Raleigh to Dorrigo on the NSW North Coast, the second half of the run is easily one of the best stretches of road in the country. The cherry on top of this amazing stretch of bitumen is the series of waterfalls that run right past (and under, alongside and sometime on top of) the road. And that’s not all there is to see, either. A quick detour down one of the areas many side roads will lead you to lush rainforest, amazing swimming holes and beautiful lookouts.

From his home in Sawtell, our rider Pete and his BMW GS ride the stretch of road as he commutes to his job as a Paramedic in Dorrigo. Many of us would consider ourselves lucky to ride the road once in a lifetime, but Pete is out there on a daily basis. Spoilt much? [superquote]“After big downpours, the falls will often run right over the road.”[/superquote]

But no, it’s not all smooth sailing. The road has its fair share of trucks and tourists on it and the area is known as one of the wettest in the state. That’d explain the waterfalls and green grass, then. After big downpours, the falls will often run right over the road.

The road is also very narrow in parts, meaning that there’s sections where traffic coming down the mountain must give way to those coming up, which is something that we’ve never encountered before while shooting the series. Yes, it’s intended for local riders, but we genuinely think that pretty much anyone who rides will get a kick out of it. And as before, we’ve roped in Return of the Café Racers and Stories of Bike to help us spread the word.