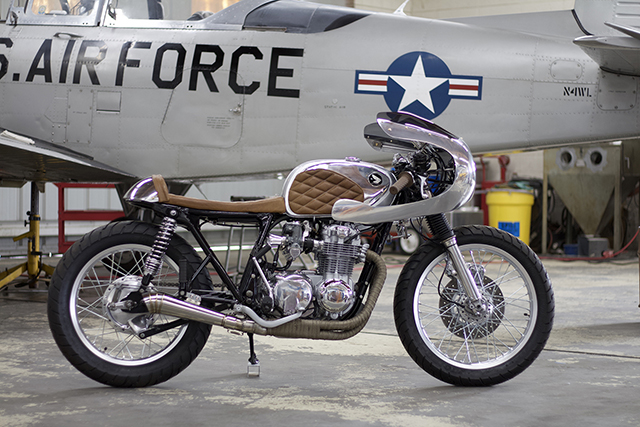 When Tom Cruise rode a Kawasaki Gpz900R in the hit movie Top Gun, the mix of a flyboy on a motorbike just made perfect sense. Since WWII, pilots have been some of the biggest buyers of motorbikes, with up to 85% of those at the controls in the air believed to have a bike license. So it is little wonder that the two often inspire one another, and when Craig Marleau of Kick Start Garage in Northern California got a commission for just such a build he immediately knew the direction to take. From the bones of a 1976 Honda CB550f he’s built up a beautiful cafe racer with all the right inspiration from a ’50s fighter plane. Craig is no stranger to bringing great ideas into reality, with his BMW and Bultaco ‘Taco Truck’ a major hit in 2016. The vintage motorcycle ace knows his way around a Honda too, with his CB160 ‘Penny Racer’ providing plenty of influence for this latest build, as he sought to create a cafe racer for his client that ticked every box in their wish list. This not only included vintage aircraft inspiration but also had to be useable and reliable, as well as having the ability to ride two-up. So after some initial consultation, they agreed the 550f was the way to go. 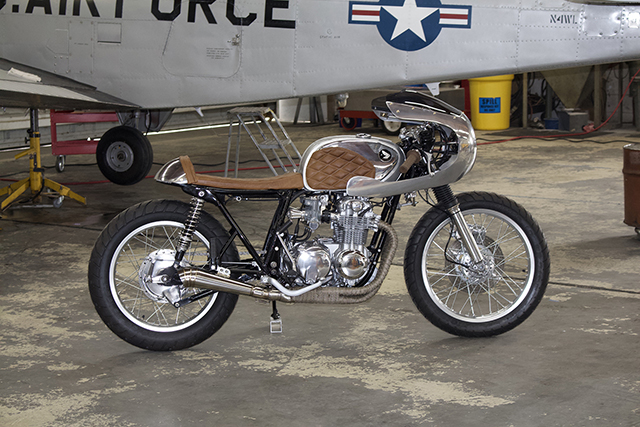 After some hunting the right donor bike came up and it wasn’t just a random choice for Craig to go with the middleweight Honda four. When it was released most reviewers believed it to be Honda’s best bike since the introduction of the CB750, with just the right balance of performance and handling to match the impressive reliability. So with the super sport for its day 550 stripped-down, Craig got to work on the chassis, removing any tabs that wouldn’t be of use, cutting off the back of the frame and smoothing things out. 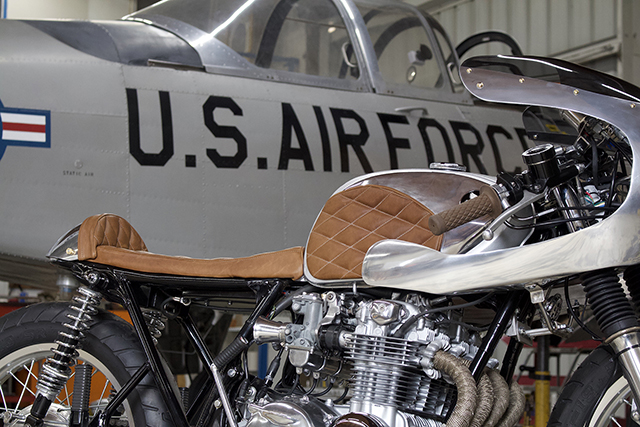 The rear benefits from a new hoop with a Lake Moto tail light in the rear grafted in. Then the frame was shot with powder coat in gloss black with clear powder over top for extra deep gloss black that really makes the bodywork to follow pop! The fuel tank is the first to go on, the vintage C76 Super Hawk piece giving the bike a more vintage look and transporting it into the ’50s. Then following the path of the ‘Penny Racer’ the knee grips are wrapped in leather, with custom alloy side panels to match and the rest of the tank finished in KSG silver paint. 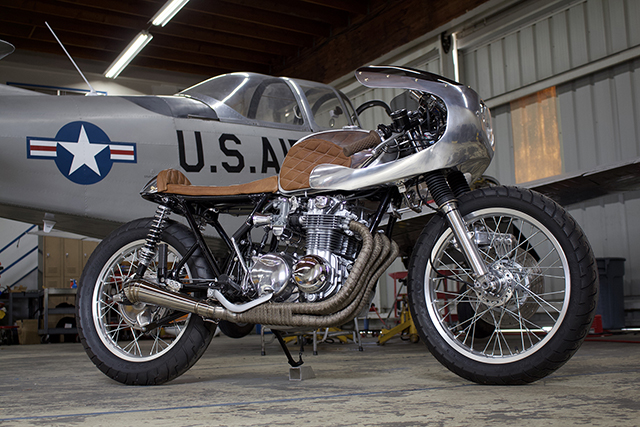 The seat too is made in house and is upholstered in matching leather in a beautifully executed diamond pattern stitch. But to allow his client to ride with a passenger as requested while still giving the cafe racer look, the rear cowl that Craig made is not only slightly smaller than usual but is easily removable, providing flawless form and function. Moving to the front of the bike and no visual feature pops like the Omega Racer front fairing, instantly transforming the commuter machine into a fighter-esque appearance. 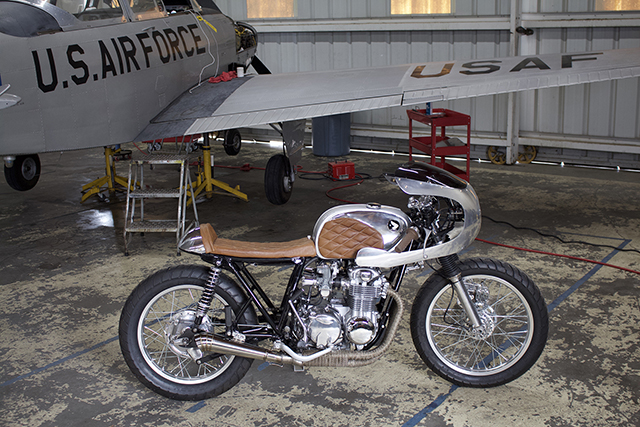 To get the bike into rolling form the wheels and hubs were removed and stripped down before being rebuilt with new alloy rims laced up with stainless spokes. For tyres Craig picked the Shinko 712, which gives the client the look they were after while also providing excellent grip in all kinds of conditions. To keep them pinned to the road, the front forks are totally rebuilt and given a new set of springs. While a rebuilt brake assembly clamps the all new drilled front rotor for improved stopping power and the rear is sorted thanks to progressively sprung rear shocks.

Of course a bike can look a million dollars but not be much use stranded by the side of the road, so to ensure his client wouldn’t have such problems, the Honda four banger has been given a full rebuild. Bolted to this is an all KSG custom exhaust, that is wrapped up for heat protection and finishes out in a slick single muffler. The overhauled carbies now take their air through a stunning set of velocity stacks (that can of course be covered with slip-on filters) and the engine given one hell of a paint and polish. 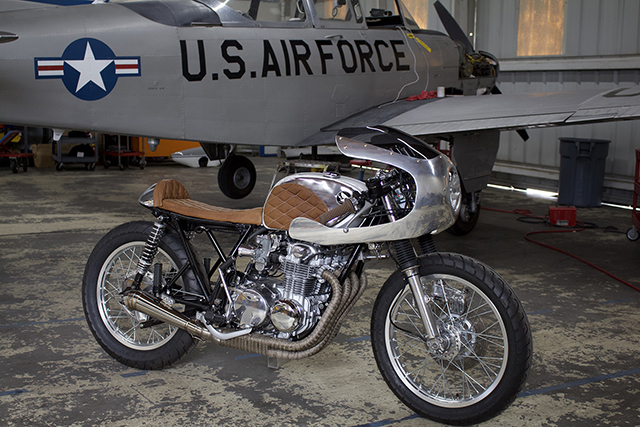 Speaking of which, it is impossible to imagine the number of hours Craig spent rubbing on just about every surface of the Honda, giving the polished areas an incredible finish! To complete the build an all new wiring harness leaves zero exposed and only enhances the ultra-clean finish. The rest of the electrics are a mix of parts from Moto Gadget and a Rick’s Electric voltage regulator so that a tiny lithium-ion battery can be used. Parked up next to a Beech 45/T-34 Mentor it’s clear that Kick Start Garage has once again delivered on the brief and their client’s only task is to look at their two-up co-pilot and say that famous line, “I feel the need – the need for speed.” 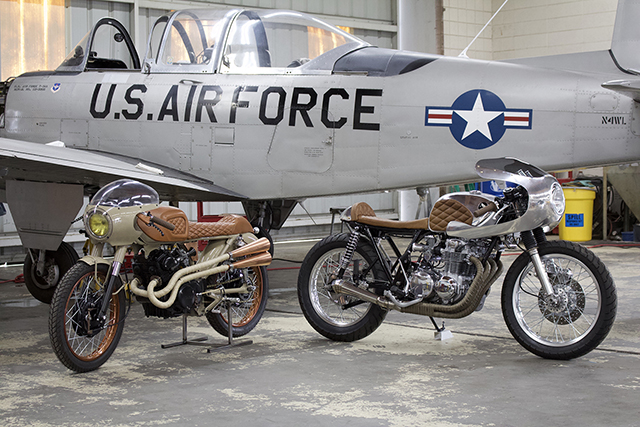