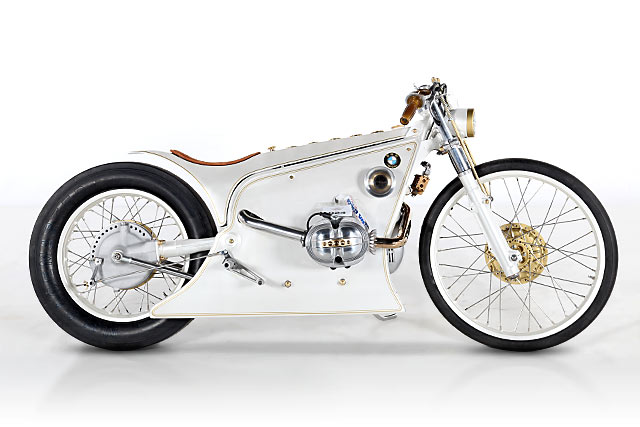 There was a time when the only way to see the very best custom motorcycles from around the globe was to duck into your local newsagent hoping the latest edition of your favourite magazine was on the stands. But the internet has changed all that, the moment a new cool custom is completed anywhere on earth you can see it almost immediately online. With such an overload of brilliant bikes it’s easy to take a blasé attitude to just how amazing some of these builds are. But even if you look at bikes all day long the latest custom creation by Dirk Oehlerking of Germany’s Kingston Customs will leave you captivated. Strap yourself in, because this blown 1986 BMW R80RT known as White Phantom is like nothing you see every day and deserves your full attention. Dirk is a special kind of builder who can create custom masterpieces using as a base the latest bikes off the factory floor right through to true vintage motorcycles. A perfectionist whose portfolio of work places him amongst the elite builders in the world. But who like any great artist is always looking to go one better.

“After the worldwide success of the red BMW R75/6 Bobber and the blue BMW R100/7 Café Racer I was looking for something new. It should be reduced, light and very stylish. I wanted to take the light, slim shape of the former Kingston bikes to a new level.” That new level is White Phantom, a machine so good it recently came second in class at the 2016 AMD World Championship of Custom Bike Building. The base for the build, an ’86 R80RT is one of the least attractive machines the ’80s offered up. From a decade known for its fashion faux pas, that’s saying something and yet another testament to Dirk’s incredible skill. But he knew beauty was under there somewhere and so stripped the big girl down and began to dream.

“When I sit relaxed in front of the bike on the workshop, new forms appear and I suddenly see a completely different bike. I experimented old school like with cardboard, I created stencils, reject them and tried again. Suddenly, a very elegant lineage emerged, which touched and totally carried me away.” The frame might be largely hidden but Dirk has smoothed it out, filed the ends of every weld and cut off any unnecessary bits and brackets of which there were many. The swingarm that encases the shaft drive is given the same treatment with a finish that would leave the BMW engineers red-faced.

With the skeleton now formed the body work began with each piece shaped, offered up and then inch by inch perfected. The shape of the side panels is reminiscent of a modern speedway machine but here even the engine is enclosed. But it’s the top section that is truly a metal work master class, the single piece flips open to reveal access to the engine while also acting as the seat base, fuel tank and elongated dash. The fuel tank stores much of its gas beneath the seat for perfect mass centralisation and creates a uniquely slim frontal profile.

If the metal work is perfect the paint is next level, white might be a simple colour but it’s brilliantly laid down across the machine with brass coloured accents to match the soft metal’s fittings. The brass work continues across the build with the vintage German gauges adapted to work with the BMW all featuring classic brass bezels. The gas caps match and even the custom BMW/Kingston logo utilises the colour. Standing back to look at the machine in this state Dirk realised “suddenly, a very elegant lineage emerged, which touched and totally carried me away.

And again one recognises the special reduced and slim shape Kingston Design.” But as good as the visual body transformation is the mechanicals are even more impressive.

It all starts with what’s hidden beneath the side covers, a totally rebuilt 800cc boxer twin from the original donor bike. But it’s no basic freshen up with the engine built to withstand the demands of forced induction.

Dirk is no stranger to turbocharged BMW bikes, but in such a confined space it presented a range of unique challenges. “I had to prevent heat problems under the cover and I solved it with material of the Formula 1 era”. Those 1980’s BMW turbo engines made up to 1500hp from just 1.5 litres and powered Nelson Piquet to a World Championship. But the area Dirk had to work in is tiny compared to an F1 car, so the turbo capable of flowing over 100bhp sits in front of the engine. This unusual layout allows a short header path from the Boxer heads to ensure fast spool up times. A blow through turbo setup is notoriously difficult to tune, twin carbs making it even harder, but once again Dirk’s genius shines through. The entire engine is polished and detailed to the point you could literally eat off it.

With more brass accents fitted to the air heads valve covers and all the pipework incredibly polished. To assist with the extra heat an oil-cooler is fitted out front and of course, finished in a brass coloured hue. It’s probably fair to say the original 50hp from the factory has been doubled. So to get that power to the ground the Racemaster 4/26.6-18 drag slick provides a big sticky contact patch for rapid launches. The rear wheels itself is from a BMW R75/7 with the white painted rim given new stainless spokes.

These lace it to the shaft drive hub which is a mix of exposed metal edges and beautifully counter sunk cooling holes and more brass coloured paint. Two high-grade steel bars hard tail the rear end with drag style rose joints ensuring the highest quality of finish and function. But if it’s possible the front end is even more impressive and just like the entire build is crafted in-house at Kingston Customs. Dirk has made one of his well-known “Telespringers” from a mix of BMW, Honda and handcrafted parts. The geometry is set by the enormous Honda XL 500S 2.50-23 rim that wears an ICE Speedway 23 inch tyre.

The BMW forks are drastically shortened and clamped in place by the stock trees. From the top clamp the springer element is added with twin shafts running helper springs secured by, you guessed it, brass nuts. A hand formed pair of bars is held in place by the stock risers, with gum grips and vintage levers and throttle mechanism to further disguise the bikes true age. The foot controls are no less impressive with custom-made and machined rearsets, with polished linkages. The diamond stitched minimalist seat isn’t exactly well padded, but there’s a lot more to think about than your butt when astride this White Phantom. The lighting is kept simple at the front with a small vintage light while out back it’s another lesson in custom creativity. A factory BMW exhaust collar houses the small tail light with brass accent and Kingston logo’d number plate holder. All the electrics have been reduced until there is one switch on the headlight and a rocket ship style starter to fire the fury.

Make no mistake; this is no show pony with the blown BMW ready to be unleashed on some European 1/8th mile action. It rounds out a huge year for Dirk who couldn’t be happier. “It could only be called ‘White Phantom’ it breathes passing you, it touched my soul”. And it touched us in all the right places and like you we didn’t have to visit the newsagent for the pleasure of feasting with desire on such a picture perfect creation.