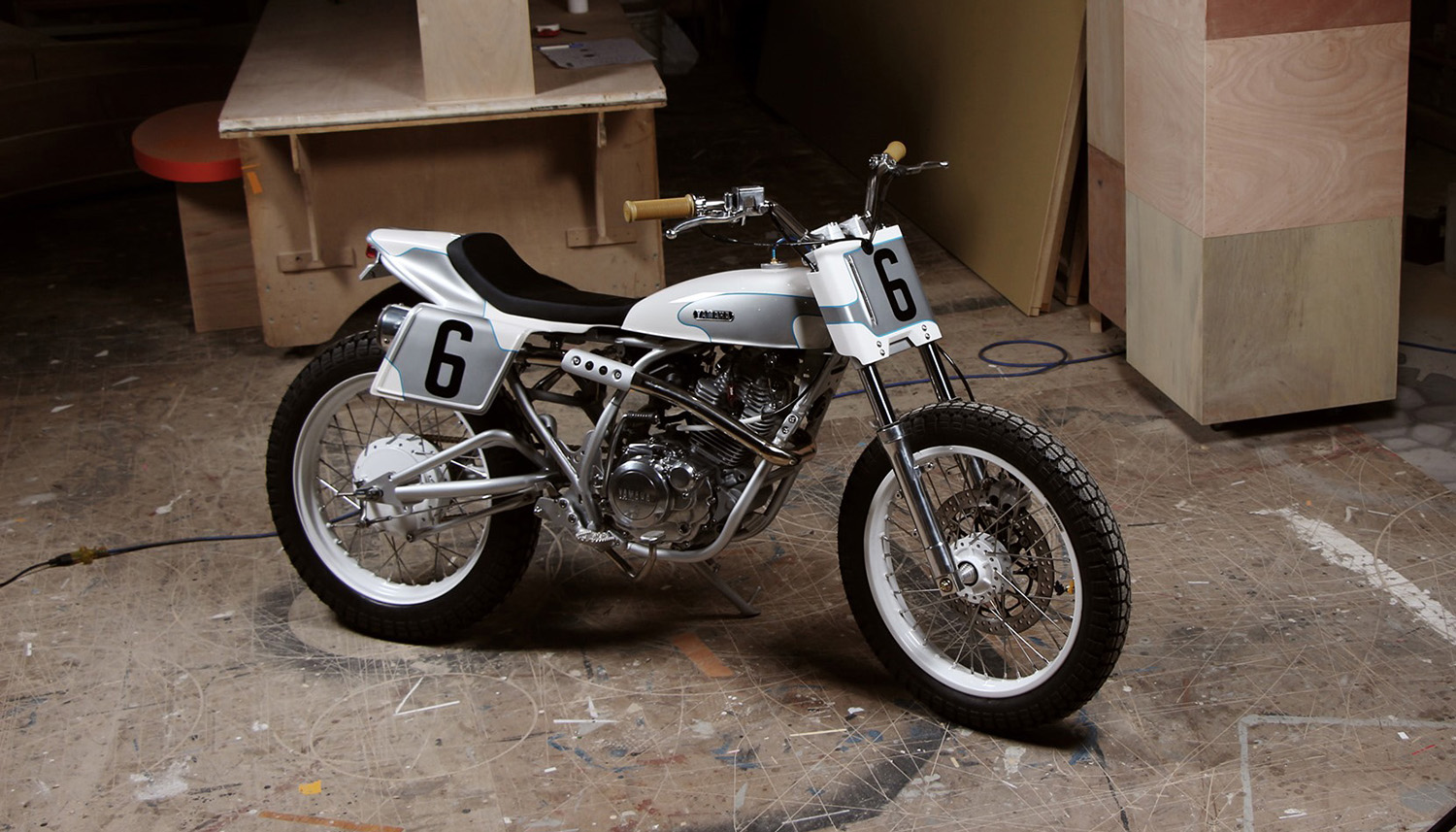 While much of the Western world views motorized two-wheelers as something of a luxury, the same can’t be said for most parts of Asia, where small-displacement motorcycles are viewed through a much more utilitarian lens, outnumbering cars and trucks by a significant margin and comprising the majority of vehicles on the road. Valued and widely-embraced on account of their utility and economic nature, small-bore scoots are practically omnipresent in regions like Taiwan, which receives a variety of small displacement motorcycle models that aren’t available in any other regional market.

The ubiquity of these so-called “White Plate” bikes—defined as anything south of a quarter-liter—has resulted in a handful of local customs shops that largely focus on little bikes such as the Taipei-based outfit, Mike’s Garage. Located in the capital’s Neihu District, the company is headed up by Mike Chen, and for the most part, is a one-man operation. “I founded the studio in 2015, though I’ve been trading in motorcycle parts for roughly the last decade,” Mike tells us. “I now specialize in bikes that are no larger than 400cc’s, mostly with an old-school style, though I’m willing to try anything cool.”

Dubbed “Sandie,” Chen’s latest project demonstrates the shop’s typical MO to brilliant effect, thoroughly transforming a small-displacement, utilitarian commuter into a pint-sized road-legal flat tracker. The build began its life as a 1997 Yamaha SR150—a Taiwan-only model—before going up on the bench and undergoing a full teardown. “Due to its market position as a commercial vehicle, it was a really big challenge to turn the bike into a tracker,” relays Chen.

Starting with the frame, Mike went through and fully de-tabbed and freshened up the nearly quarter-century-old chassis before lopping off the aft end. In its place, Chen installed a minimalistic, hooped subframe that kicks up at an approximately 20-degree angle. The stock swing-arm was also binned in favor of an upgraded aftermarket item from the Kick Motorcycle Company, though rather than utilizing the donor’s dual rear shock configuration, Mike opted to bestow the SR with a new mono-shock, which required fabbing up and grafting in a one-off offset linkage.

“This was unquestionably the hardest aspect of the entire build. Installing the new multi-link system required having to calculate the smoothness and strength of the mechanism,” Mike explains.

From there, the Taipei builder went about replacing the stock wheels with a more dirt-oval-appropriate set of 19” units front and aft. The stocker’s front drum brake was swapped out for a single disc setup. The front-end was also lightly fettled to better accommodate the new geometry from the 19-inchers—both of which now sport white rims with bare metal spokes and nipples, and are wearing custom “Mike’s Garage” decals.

Next Mike turned his attention to the build’s bodywork. Resting perfectly atop the new subframe is now a custom fiberglass tracker tail section with an integrated number board to shroud the muffler and an aftermarket taillight and a tail tidy neatly poking out of the aft end of the bike. What’s more, the tail’s also been capped off with a bespoke perforated leather saddle with understated blue highlight stitching to match the pinstripe’s accents in the build’s livery. The tank is a vintage item that Mike had to modify in order for it to sit squarely atop the frame rails, while out in front is a traditional tracker number plate wrapping around a modified triple tree setup and discreetly housing a vertical strip LED headlight to keep things street legal.

“For the bodywork, anything that wasn’t custom created from scratch required extensive modifications,” says Mike.

Devoid of any instrumentation or displays, Sandie’s cockpit is a decidedly spartan affair, with a set of swept-back Renthal bars set on aftermarket risers and fitted with old school switchgear and retro grips. A custom machined gas cap also adds a bit of an old-school aesthetic while a pair of toothed footpegs afford the project some added off-road flavor.

The Yamaha’s exhaust system is another blatant highlight of the build. Binning the stock system in its entirety, Mike whipped up a full custom exhaust from stainless steel. Polished to hell and back from end to end, the system is comprised of a single header, winding around the frame before routing under the seat where it culminates in a SuperTrapp muffler. A punched out heat shield also helps to keep the rider’s right leg from getting uncomfortably toasty during rides.

With everything else all sorted, Chen began preparing the bike for painting. It was then treated to a professionally-applied white and silver scheme separated via an asymmetrical baby blue pinstripe design. The swing-arm and frame were also hit with a matching coat of silver, as were the handlebars, and the rear drum’s been adorned in white, allowing it to better blend into the back wheel.

Rounding out the project is a myriad of minor touches, with NOS ’80s era Yamaha tank badges, the Hamamatsu firm’s Tuning Fork logo badge decorating the back of the fiberglass tail section, and a novelty Roadrunner head valve stem on the front wheel. Replacing seemingly unimportant components such as the kickstarter with NOS items also makes for an overall markedly cleaner, and more professional-looking build, bordering on a factory-level finish.

Chen’s completed one-off work isn’t just one of the cleanest trackers we’ve seen all year, but is unquestionably one of the best-executed, most characterful sub-250cc machines we’ve ever laid eyes on. Looking far more muscular and defined than its 150cc donor model, Sandie is sure to put Mike’s Garage on the radar of the larger global custom motorcycle scene, and with any luck, will inspire a few small-bore builds down the road.