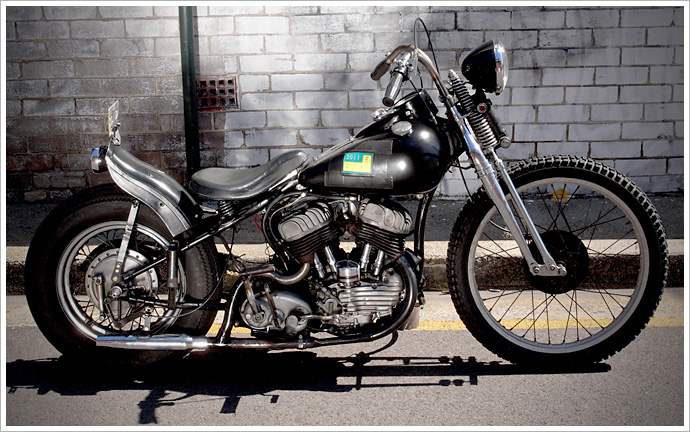 Buying expensive things on ebay can be very dangerous, especially if you’ve been consuming a few too many beverages. We have all been there. We talk ourselves into needing the thing so badly that we make a spontaneous decision to buy the thing before someone else beats us to it. Russell Lowe had one of these experiences. He was so excited about leaving New Zealand for the sunny shores of Sydney that he thought he would buy a new motorcycle for the new country. “I decided not to ship my current bikes (Moto Guzzi 850t, Sunbeam S7 and a 1920 Douglas 350) over with me as it gave me a great excuse to get another one” he says. So after looking through bike magazines and on ebay he admits he “got a little crazy about finding something”. Then this Harley WLA appears on ebay and he knew he had to have it. Russell impulsively hit the ‘buy it now’ button in fear of missing out on it. Then around a week later the Harley was delivered from Melbourne and he got the shock of his life… “When it showed up a week later I was gutted.” says Russell. “The last owner clearly wanted a “Big Twin” and had it all done up with skulls and shit all over it. If you stepped back 20 feet, closed one eye and squinted with the other it kind of looked ok but the closer you go to it the worse it got. Not just from the skulls either; brackets looked like they were cut from sheets of galvanised tin with an axe, the old disc brake master cylinder looked like it had been dragged down the road to make it fit the 1” handlebars, and the gearbox (an early BSA M20 one) had snapped itself from the shitty mounting bracket holding it to the frame.” For a couple of years I worked on it in the car park in my apartment building. I covered the shitty pipes with pipe wrap to hide the atrocious welds then fitted a 500 x 16 Firestone on the back. Which is when the real work started happening. The rear wheel was about an inch from the centre of the frame. I asked one guy how he might fix it and he said to cut the frame off and extend it by 4”. Yeah, that wasn’t going to happen. Instead I used a lathe at work to turn down the hub (on the CB550 rear wheel) and got a guy to make up a custom offset sprocket for the gearbox. So after a bit of drama the wheel was in the right place.” Soon after this I started renting a workshop with an Industrial Designer mate of mine (I’m an Architect by training). We started off with a few benches and some shitty hand tools but within a few weeks we got given a whole bunch of stuff from a workshop that was closing down. It was like winning the Lotto; we got a big lathe, a big milling machine and loads of heavy duty equipment. We had to wire the workshop up with 3 phase power and pay some massive guys to help us get the machines into place, but it was like being in heaven. I’ve added a tube bender (which I used to make the handle bars, 1” is the only formers I have so far) and a TIG welder which I’ve been learning how to use for the last couple of years. I think I might have cracked it. All I can say is it’s a step up from Arc and MIG welding in terms of skill development, that’s for sure. I used the lathe to make the axle and spacers for the XL500s 23” front wheel, that took two attempts and taught me how important 0.1 of a millimetre is. It also came in handy to make the brake stay, the mid mounted controls (with a BSA footpeg on one side and a Harley footpeg on the other) and a new intake manifold.

I finally got rid of the pipes it came with by making my own from a reproduction set and some U bends. It took a bit to get them lined up, but they make such a difference to the look of bike. They also make it start a whole lot better. I think it must be because they offer a little bit of back pressure (the old pipes were straight through); now it’s a two kick primer, one kick starter. Even after two weeks sitting it’ll start right up. With the four speed box it cruises really well at 60 mph. The M20 originally towed a side car, so the really low first gear means you can gear up the rear sprocket and still get off the line ok.” So now it’s finished Russell is placing the bike back up on Ebay and is hoping some trigger happy guy hits the ‘buy it now’ button so he can use the cash to finish building his next project. It’s another WLA engine, with a Big Twin 4 speed, Springer forks and a custom frame he has made himself. “I made the drawing over 5 years ago, so it’s about time I got onto it.” Chop, chop.