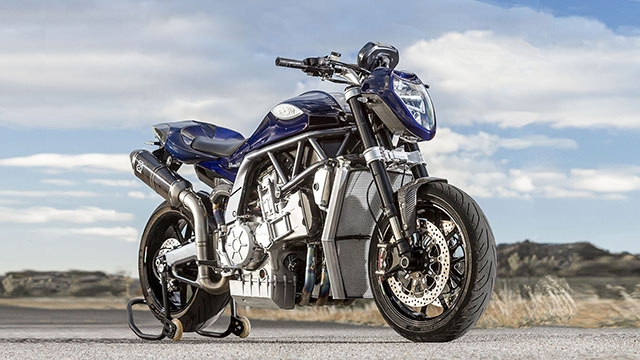 It’s the most powerful production motorcycle ever produced, nothing else even comes close, but this missile on two-wheels is more than just the sum of its parts. The brainchild of Australian race engineer Paul Maloney, who spent two decades in the paddocks of the world’s premier racing categories, the PGMV8 is the ultimate street bike he came back to the Victorian bush to build. The carbon bodied, road-legal machine is a mechanical masterpiece, packing 334hp from its signature 2.0l V8. So to get the inside word, Pipeburn spent considerable time over the last six months getting to know the man and his machine. 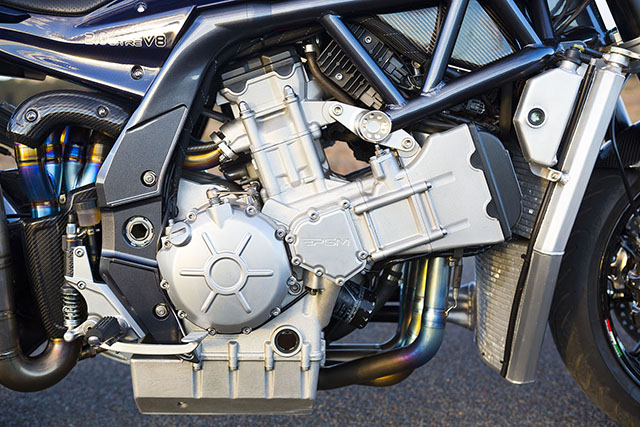 From Sir Jack Brabham winning the Formula One championship in his own car, to Jeremy Burgess guiding riders to fourteen Motorcycle GP championships, Australian’s have been a dominant force in global motorsport. But the ever modest Maloney started his adventure in equally humble beginnings, in the BSB paddock doing all the dirty work to get a gig. He quickly rose through the ranks, first as a race engineer with the dominant Loctite Yamaha squad, before heading to the continent. There he had success in national and world superbike championships, before stints at Sauber Petronas F1 and Eckl’s Kawasaki, building and developing their MotoGP engine programs. 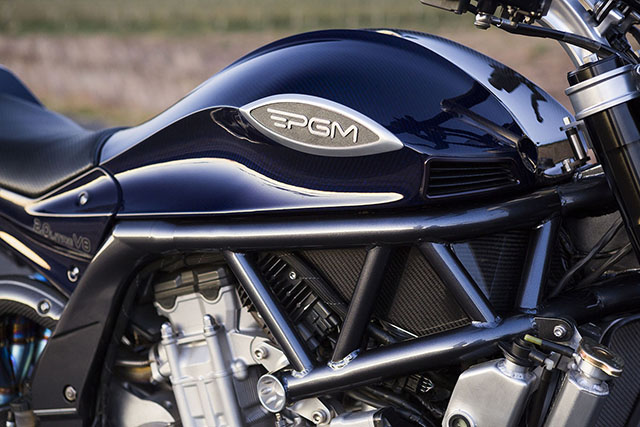 But for years Maloney dreamed of building his own motorcycle and I first wanted to know why a V8? “It’s the Aussie thing isn’t it”, he laughs. “I’d long had it in mind to build it from Yamaha R1 cylinders and heads, but I first drew it up based on a Kawasaki ZX-7RR, as they were the parts I had access to at the time.” When he left racing and came home to Australia the R1 had further evolved and Maloney selected the 2006 R1 engine with its five-valve heads as the basis for his V8 masterpiece. Each bank of cylinders sit at 90°, with a forward running five bearing crank at the heart of the perfectly balanced 1998cc V8 engine. 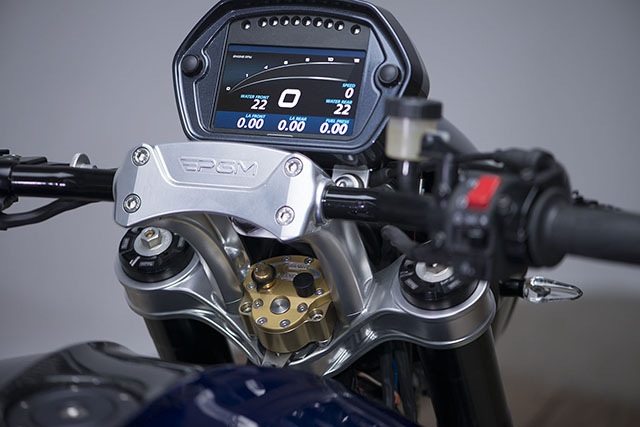 No stranger to solving challenges with crankshafts, Maloney was engine builder and race engineer on the only team to win a major championship with the famed Yamaha R7 homologation special. While reports flooded out for years from the major teams that “the crankshafts failed”, the Maloney built machine piloted by Christer Lindholm didn’t spin a single bearing using the same crank all year. Engine management too was inspired by his time in racing, having known MoTeC founder Richard Bendell for decades, “it will allow you to do almost everything, but keep it simple.” An engineers delight! With all the tuning of the M130 ECU done by Maloney, including the silky-smooth ride by wire. 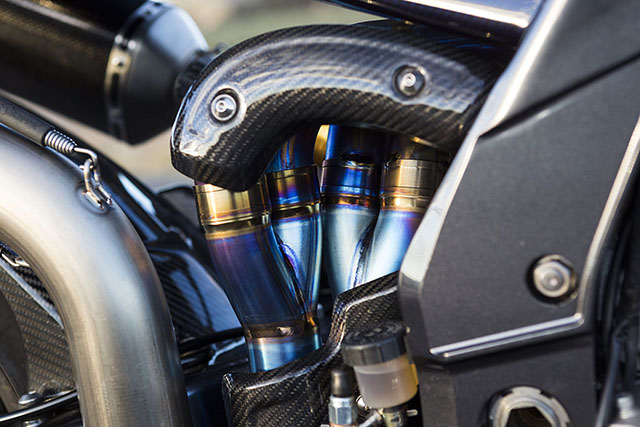 Moving further back the gearbox presented a hurdle most couldn’t overcome, but always seeming to find a simple answer to the hardest problems, Maloney describes the solution, “essentially everything had to be turned upside-down, reversing the output shaft and the clutch shaft.” It would take a textbook to explain the process of building such an incredible engine, but the resulting 334hp and 214nm speaks for itself. According to the world’s most experienced journalist and test rider, Alan Cathcart, “The PGM V8 is the single most impressive piece of multi-cylinder madness I’ve ever had the privilege of riding.” 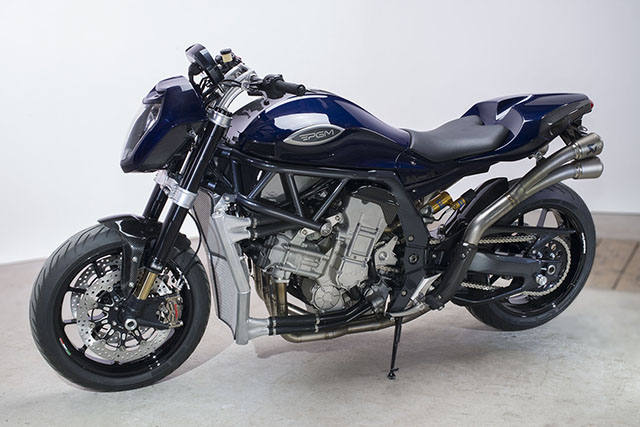 But while the incredible engine screams like a ’70s Formula One car through the Maloney designed and Akrapovic built titanium exhaust, it’s more than just a straight line motorcycle. With the engine in a jig, Maloney explains the founding principle of the chassis “I knew where I wanted the headpiece, in relation to the countershaft sprocket, and then it was a process of how are we going to put this together.” And in a fashion reminiscent of the legend John Britten, “the first frame we made using electrical tubing.” With the final item a combination of Chromoly trellis and 7075 aircraft quality aluminium, TIG-welded together and heat-treated. 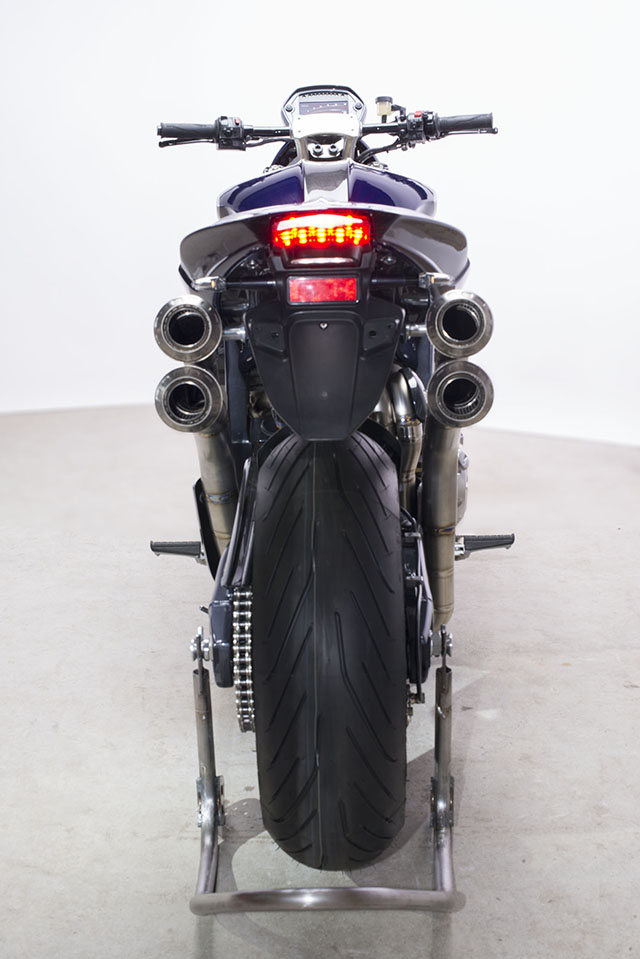 Listening to Cathcart enthuse, “It’s hard to over-emphasise how thoroughly practical and totally rideable the PGMV8 is in real world conditions.” You realise that the quality of the components used only tells half the story; 30 years of experience to set it up perfectly is the big piece of the equation. The front end sports beefy Ohlins FGRT301 48mm USD forks, fully adjustable and tuned to perfection, Maloney adds “they also had to look the part.” The rear is an Ohlins TTX Mk2 shock, with a custom link that controls a factory R1 swingarm, that when I ask why not a custom piece the response makes perfect sense, “It works so well, it was a no brainer!” 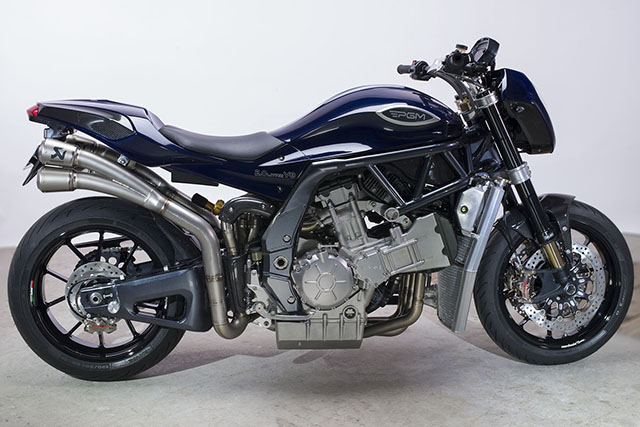 Top speed? “Well, how brave are you? And with Cathcart adamant that “few if any of today’s MotoGP bikes would be able to keep up with this motorcycle in a straight line”, he’d know, he’s ridden them; the braking wasn’t going to be left to chance. Derived from what Brembo supplies to MotoGP teams are the front GP4 Nickel-plated calipers on 320mm discs and an underslung P4-34 at the rear. While the unsprung weight is kept to a minimum with Marchesini 10 spoke forged aluminium wheels employed and wrapped up in Michelin Pilot Power 3’s. The three-time ASBK champion Shawn Giles just as impressed with the stopping power around Eastern Creek as he was with the insane acceleration. 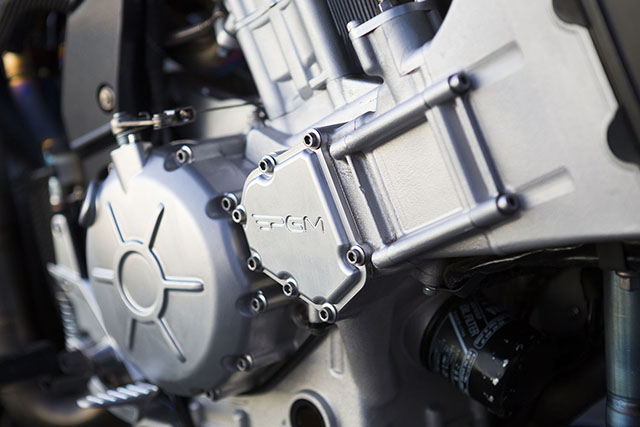 With all that mechanical magic there’s still time to enjoy the gorgeous lines of the carbon fibre bodywork. The triple clamps with their integrated risers are a work of art, while the infinitely adjustable dash display teaches a lesson to the major manufacturers. It is the rare kind of motorcycle that transfers its incredible spec sheet into real-world performance even more mind-blowing than you could ever imagine! The weight, 242kgs wet with fuel, water and lubricants is 14kg less than the supercharged Kawasaki H2 SX, while having over 100 more horses to play with. As the man who has ridden every new bike for 40 years, Alan Cathcart says, “The acceleration is phenomenal, nothing I’ve ever ridden even comes close!” 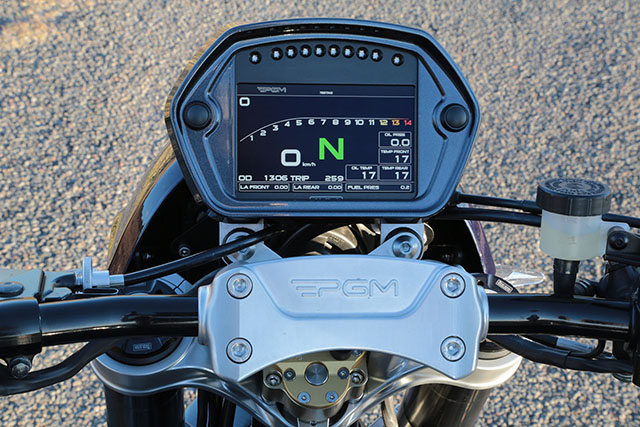 But taking it all in, you pause to remember that this is not a race bike, it’s fully road legal, all the serviceables are available from your nearest Yamaha dealer and with the rev-limiter set to be raised, a reliable 400hp streetbike with a license plate can be yours to own while the major manufacturers are still playing with ‘just’ 200! It’s a remarkable feat of engineering from a man willing to dream big and who possesses all the skills to have brought the fastest ever road-legal motorcycle to market. The price point is similar to exotics like the Confederate V-Twins, but while they have the presence, the PGMV8 has the performance to truly make the motorcycle connoisseur the Rossi of the roads! 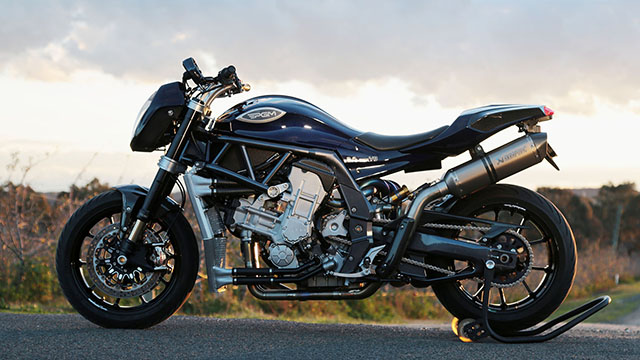 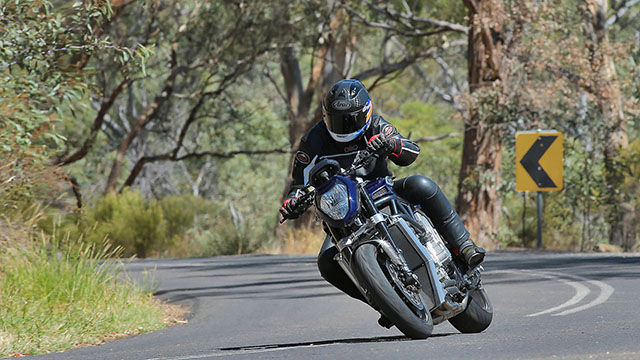