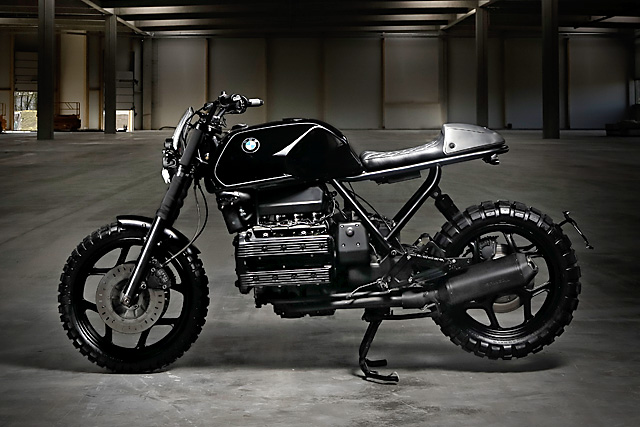 What’s the biggest change you’ve ever undergone when buying a new bike? For many of us, it’s simply the newer, bigger, better model of whatever it was we were already riding. The more daring of us might jump ship to another brand or, if they are getting old and all complain-y like me, something with a bit more comfort that’s easier on the wrists. But have you ever thought about making a really big leap of faith and choosing something that’s just totally and utterly different in almost every single way? Austria’s Titan Motorcycles faced something along these lines with their latest build. In the end, the customer rode out on this, one of the nicest, most original Beemer Bricks we seen all year. But can you guess what he rode in on? “It started in the fall of 2015,” said Titan’s Tom and Mike from their Graz shop. “A customer that looked like he earned good money came into our workshop. He is in the real estate business, he’s an accomplished hunter and owner of a mountain lodge. He also rides a Harley Davidson Road King.” That’s right. A Road King. The bike was going on 6 years old and had only 3,500km on the clock. It was filthy dirty, and with a broken battery, to boot. Hell no.

Needless to say, the Titan team didn’t have to explain to him why this may not have been the smartest of purchases. “Riding a truck like that through a Central European city is just plain wrong. And it didn’t get much better when he rode it up to the alps. Then, looking at the BMWs in our showroom, his eyes started blinking. We got him!” says Mike. So they arranged a quick test ride. First of all he got the keys to an R100, but the power didn’t really impress. Coming straight off of the Road King, he was probably expecting something with a little more torque. Then they play their trump card. “How would you like to take this K100 for a ride?” “Alea iacta est,” as Julius Caesar once said. ‘The die was cast’. He wanted a Flying Brick. “It seemed the brakes and the smoothly revving engine just may have convinced him. He wasn’t blown away by the performance, but we promised to work on that.”

But like a large chrome albatross around their necks, the owner was now insisting that they sell the Harley before they go started on the K. And as you can imagine it wasn’t an easy sell. In fact, it wasn’t out the door until a full nine months had passed, but finally they are ready to get going. “We found a really good base model; it was a one-owner K100 with only 21,000km on the clock. It was a relatively rare ‘Luxury Tourer’ model, built in 1986.” And off they went… Having worked with many K’s previously, things started to happen pretty quickly. “It was stripped down in no time. We decided that we wanted to create a very dark bike, so we took the frame off and prepared the whole drivetrain for a matte black paint job, along with the engine and gearbox covers.”

“I knew that I wanted to lift up the subframe in a straight line from under the gas tank, straight through to the tail. A lot of builders would just change the last 30cm of the bike; this often causes a ‘double triangle’ frame section.” Tom and Mike wanted to avoid that, but the clarity of their proposed design was looking like it was going to be a hell of a lot of work. “We had to completely rebuild the frame behind the engine mount as well as the mounting points for the rear shock. It was quite a big job.” But the challenge of building the rear frame was nothing when compared to what the wiring loom had in store for them. “For the weight reduction and according to our ‘new-is-new’ policy, we removed the wiring loom and tried to figure out how to reduce it to the absolute minimum. I remember sitting on the ground with the loom itself and a wiring diagram. I knew then and there that I was going to learn a lot about BMW electrics in the coming days.” It also seems that the customer was a bit of a gadget freak, so the boys installed a keyless go system, a USB charger and one of Motogadget’s ‘Motoscope Pro’ digital dash displays. And what do Tom and Mike like most about the finished bike? “In our opinion, it’s probably a combination of things. There’s the handmade aluminum parts, the front faring that houses the LED spots and the passenger seat cover. But maybe the real highlight for us is the re-shaped gas tank with those small vent covers. It makes us smile every time we see it.”

While it’s easy to look at these pictures and marvel, you always have to consider that the base bike was a lard-ish touring model that was manufactured in the mid eighties – a period in time not really known for its exquisite taste. “In the end almost 40kg of weight was removed, so the bike’s handling has been tremendously improved.” What with fellow Austrians Vagabund’s amazing ‘V05’ from last week and now this slick Brick, it’s beginning to look a lot like it’s going to be a very custom Christmas in Graz. Hoping for something like this in your Christmas stocking? Then best buy some plane tickets and pack your bags. And is there any chance you could pick us up a used Harley Road King while you’re there?