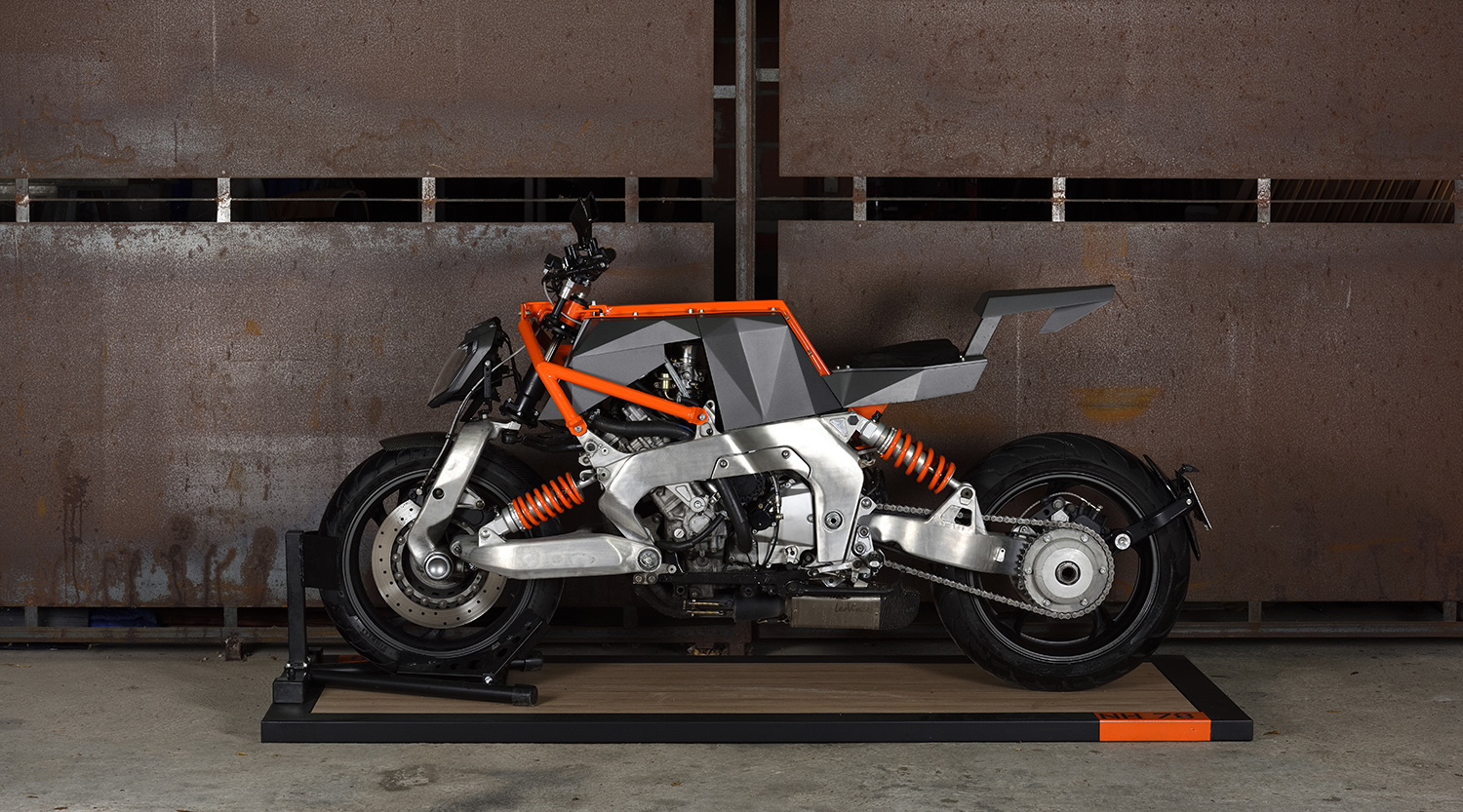 For all of the wild advancements in motorcycle technology over recent years, the basic infrastructure remains very much the same. Every now and then one of the major manufacturers tries to shake things up, but rarely if ever do those changes stick. In 1993 Yamaha introduced a motorcycle that was set to change it all, and like the rest, it didn’t. But nearly 30 years on, one very clever custom builder has taken the Iwata factory folly and turned it into something truly spectacular. He is Rodney Serra, the machine is a Yamaha GTS1000 and the result is a radical reimagining that sees the Frenchman rolling on a dual single-sided swingarm monster called NH 78.

“I am a 43-year-old Frenchie and I’m a technical architect for a living, passionate about design and bikes but without any knowledge in mechanicals, this is my first bike project. It took me 3 years to realise it, only nights and weekends, with just a grinder, a drill press, a bandsaw, and a welding machine,” Rodney tells us. Picking the GTS is a hell of an introduction into the world of modifying a motorcycle, I can’t think of many bikes that would test a new builder, like the wild ’90s machine.

“The idea was to create a streetfighter mixing an “entretube” (bike from 1920’s) and “stealth aircraft” inspiration (F117 NH). I like to ride unusual bikes and don’t have enough money to do a show bike for my living room, so it has to run!” So with his direction determined it was on the hunt for the right GTS and Rodney managed to find one that was relatively complete. The front suspension is the James Parker designed RADD system, essentially a forkless system that separates the steering and damping duties completely. Engineers ‘know’ its the better method than the conventional fork, but from the endless girder variations to Bimota’s hub-centre steering Tesi, nobody’s nailed it.

To improve the RADD system, Rodney saw an opportunity, what if the headstock-less frame was beefed up to increase the rigidity. Jumping onto CAD he played around with designs until he’d accomplished a way to do it. Dual trellis-style mounts attach to the Omega frame and meet at the stem. From here they are then bolted to a central backbone that runs down the length of the bike where a gas tank would be and ties everything to the rear of the frame. This not only gave him increased torsional rigidity but created a new way to mount both the bodywork and seat.

At the other end of the bike, those who have tackled the GTS before have simply left the stock swingarm in place. Rodney, however, had different ideas and designed a way to mount in place some Honda hardware. Picking up a single-sided swingarm from a Honda VFR750 and the wheel from a VFR800, he ditched the conventional swingarm and set about the conversion. Both the GTS and the VFR share a design that features a centrally located single shock, Rodney was having none of it, and ordered a custom pair.

He then fabricated his way into creating a Panigale-esqe system that side mounts the adjustable shock and brilliantly matches the front end. To give it all a visual uniformity, the shocks are both painted in the same orange as his new top frame, a colour that was very much inspired by the KTM Super Duke. The custom bodywork also wears the hue of a rapid machine, a matte grey from the Lamborghini catalogue, but first it had to be designed and built. This is where the F117 played a huge influencing role, its angular radar deflecting fuselage mirrored across the bike’s body.

The three major pieces are the front meshed air dams that flow into a semi open airbox to feed the engine, the custom fuel tank that sits between the rider’s legs and offers up more than enough range for Rodney to have a Sunday’s worth of fun, and the wild tail section that words simply can’t define. All of this was neatly shaped from steel, with as many of the fixture points hidden as possible and the new backbone with its own plate steel, clamping everything into one. A minimalist seat pad on the reinforced subframe, and the bike was shaping up as a rolling piece of art. But functionality was a big part of the game, this bike had to be a rider, so fenders are taken from a Buell Cyclone and to match, a custom carbon rear swings from a Ducati Diavel mount.

Picking out more futuristic parts, a Yamaha MT 125 headlight floats out over the front tyre, and a suite of Motogadget electronics keeps the power on. The engine doesn’t miss out either, with a Leo Vince underslung muffler and fuelling provided by a Mercedes external pump, both helping to bring the FZR 1000 engine to life. Parts from Rizoma, Koso, and RebelMoto fill out the controls, and Rodney had himself a reliable daily rider. But that’s not what makes ‘NH78’ so special, this is truly a bike like no other, that pushes limits few manufacturers have achieved and encourages all to shake things up in a world where tradition dictates too much stays the same.