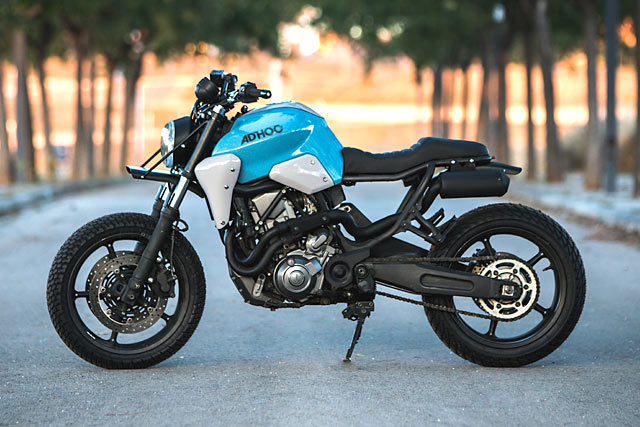 Barcelona’s Ad Hoc are a company after our own heart here at Pipeburn. They make bold custom bikes with huge swathes of colour based around all kinds of platforms. They’ve done Dukes, they’ve done BMW’s but some of our favourite work are those bikes built around modern platforms. Here they’ve wheeled out another fantastic roadster, their 28th build, based on a Yamaha MT-03. If you’re new to the bike market and scratching your head at this bike, that’s because the MT-03 originally came with a different powerplant to how it now rolls off the showroom floor. The original, and our pick of the pair, is the one powered by the big thumping single taken from the XT660 range of enduro bikes. Nowadays it’s kicked along by Yamaha’s 321cc inline twin. How’s that for a downgrade?

But back to the bike. Compared to some of the projects that Ad Hoc Cafe Racers have worked on the #28 is fairly light on when it comes to extreme fabrication. And head of the workshop, David Gonzalez, doesn’t mind it that way. ‘Not all the projects that enter the workshop are for a complete remodelling,’ he says. ‘Besides, in this case it wasn’t necessary either, since both the tires and the fuel tank were perfect for us’. What the team was trying to continue was a theme started by one of their previous builds, a XSR700 dubbed ‘Otokomae’. Created as part of Yamaha’s Yard Built series of bikes it was a stripped-back roadster with humpback tank and barely an ounce of fat on it. ‘I wanted the MT-03 to look like a younger brother… or maybe sister,’ David adds. Firstly, the team stripped down the MT, past all the plastics to see what the frame was like. ‘And once we had it naked,’ David says, ‘we saw that the main thing we had to do was to modify the subframe’. On the original model the rear portion of the frame has quite an upwards kick to it and ends in a sharp triangle. The team cut it back, shortened it slightly and produced something a little more parallel with the horizon. Underneath the airbox was removed and two Uni-brand air filters were fitted. The seat was upholstered in a non-slip fabric and has enough room for a rider and pillion to blast around town on – and enough foam so you won’t be crippled when you get to your destination. [superquote]“David Gonzalez and his team then moved onto the trickiest part of the build – the scratch built two into one exhaust system.”[/superquote]

David Gonzalez and his team then moved onto the trickiest part of the build – the scratch built two into one exhaust system. ‘Getting the line right was the trickiest,’ he explains, ‘the curves and the welds of the header pipe and finding the right point to exit on the side was hard’. But it’s worth it, with the black anti-caloric paint covered system being one of the neatest things about the #28. While David said the tank was perfect for the build, in standard trim there’s some fairly obtrusive large plastic cosmetic shrouds on either side. They made some smaller covers to give it more compact lines. They then finished the tank in blue, with a near-primer shade of grey across the top and on the new side covers. The front mudguard supports the braces that support the LED turn signals and the headlight, which was pinched from a Harley V-Rod. To complete the lines of the bike the front forks were lowered a few centimeters, which also helped shift some of the weight over the front wheel.

David Gonzalez and the team at Ad Hoc Cafe Racers love their latest creation. ‘It’s compact without being complex,’ he says. They’ve certainly created another great custom that matches his Yamaha XSR perfectly and continues a theme constant with his bikes – of being rideable and damn good-looking at the same time. Although this one hasn’t been through the custom bike ringer like many of his other creations, it’s a carefully considered, tight little build that shows how just a little of their careful touch can transform a bike.