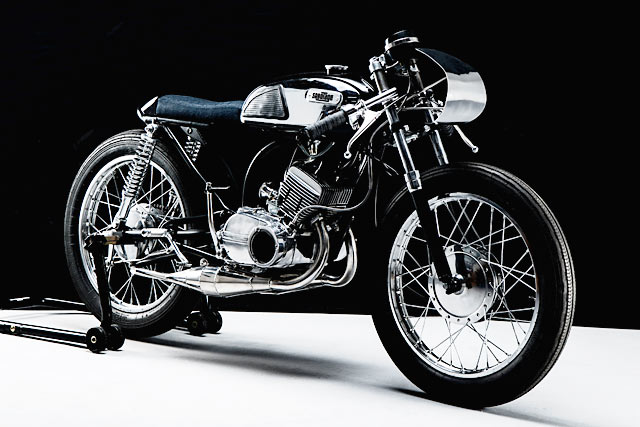 It’s hard to think of a more Australian story; two young Europeans on motorbikes meet in the car park of Bunnings Hardware and over the obligatory ‘snag’ they form a friendship that brings them together to build a custom motorbike from the remains of a freebie found abandoned and wrecked in Bondi. To add some extra sauce, they entered the bike in the builder’s competition at the Machine Show knowing they only had months left on the clock. But Sydney’s Sabotage Motorcycles always had it under control and infused their love of art to create a 1972 Yamaha RD125 2 stroke racer masterpiece. For those that don’t know Australia is largely made up of people originally from foreign lands, Bunnings is the countries largest chain of hardware stores, a snag is a sausage fresh off the BBQ and Bondi is home to the beach and backpackers were many a tourist and new arrival come to soak up the well-sold myth of Australiana. Giles and Andy are the two men behind Sabotage and in addition to bike building have also brought the world of art into the mix, resulting in events like their Twenty/20 exhibition of hand painted vintage helmets. “…with a seized crank from all the salty air and rain that had been pouring into the open cylinder heads.”

But as Giles tells it, this racer build started with finding the Yamaha in a rather unusual way, “It had been dumped at the back of an apartment block in Bondi, and a friend was on the strata committee of the building. They went through all the checks and balances to get it removed and once that had been approved she called us up and said ‘do you want a free motorcycle?’. Without even knowing what make it was, we said ‘of course!’ And it turned out to be this rather nice RD. Albeit in appalling condition with a seized crank from all the salty air and rain that had been pouring into the open cylinder heads.” This would make for the perfect chance to do a build a non-traditional donor, learn some new skills along the way and create a ride for the show that was definitely “as non-chopper as possible!”.

With a huge amount of respect for Matt Machine, the show’s organiser, they also wanted to do as much as was physically possible themselves, a trait the man himself is well known for. But first the little smoker, also known as an AS3, had to be stripped back to its bones. “A huge amount of the build was cleaning and reconditioning parts. The wheels and engine had been badly rattle canned in black, and the bike generally had a LOT of corrosion all over it,” emphasised Giles. But it’s also clear from the build process that the Aussie laid back attitude has definitely rubbed off on the boys, “While we started the tear down back in August last year, which basically consisted of pulling the engine apart to see just how bad the crank was, we didn’t really touch the bike again until late January. And we needed it finished by end of March. We didn’t even know we would able to finish the build until the last two weeks as we got the bike with no pistons in it.” Despite the late start, pistons with the right bore were finally located and Greg Ball given the job of rebuilding the crank. Despite its diminutive stature and with just 124cc, the racer’s engine is the centrepiece of the build in the way only a two-stroke can manage. That is in no small part to the beautiful hand-built expansion chambers all done by Giles and Andy! “We obtained the exact measurements for the expansion chambers that were used for the race version of the RD125 – the TA125 – and templated, cut, rolled and welded them out of 0.9mm stainless steel sheet.” Sans crappy black paint and now brilliantly polished the block and covers look a treat, with the twin carbs now sporting meshed out velocity stacks for a rorty sound. To get the bodywork looking just as tasty the boys spent the big bucks…, ok, they saved their money for beer to quench their thirst after all the hard work. As the new tank, taken from an earlier Yamaha, was picked up at a swap meet for just five bucks! Miraculously the tank was in remarkably good condition, with straight lines and neat chrome giving a brilliant vintage look. To grant it a touch up around the edges it was sent out for paint while back at Sabotage they took care of painting the frame. The rear section has been hooped with a small rear hump providing the support for the period fabric that covers the seat they stitched together themselves. “The overall proportions and lines – we think this is crucial to what makes a good custom bike great,” explains Giles. And adding balance at the front of the bike is a curvaceous fairing that was hand rolled and polished to perfection. The rear shocks are all new with a matching finish, while the front forks remain having been brought back to their best with plenty of elbow grease. But despite the rapid progress as the countdown clock to show day came around, there were some tough days along the way.“Fitting the rear-sets was one – getting the brackets in the right spot to clear the chain, and getting the aesthetics right, then welding them on straight.” But complemented by the low mounted clip-ons up front they fit flawlessly and give the little Yamaha a hint of racing pedigree, a tip of the cap to the two pot screamers that covered circuits around the globe. They gave the bike a total re-wire to ensure everything operated as it should and the centrally mounted tacho gives you all the information you need to know. Freshly laced rims wrapped in vintage rubber finishes out the build, just in time for Sabotage Motorcycles to make the Machine Show. But to truly capture the glory of their creation they summoned the services of friend and award-winning portrait photographer, Nic Walker, who shoots the closing scene of this Aussie adventure with the same brilliance and drama Giles and Andy have injected into this now reborn RD125 artful racer.