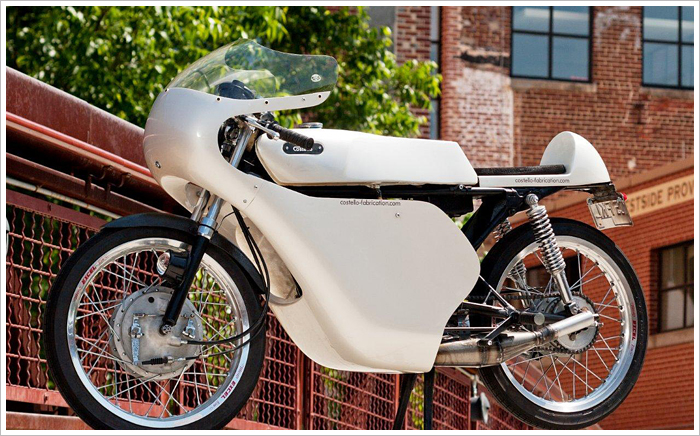 Full length fairings. Small capacity engines. Pizza cutter tyres. All strike up images of 1970s motorcycle racing, but do these statements make you think of a fully registered streetbike? Bobby Costello, of Costello Fabrications, has done the ton in creativity and engineering to bring this build as close as possible to a full race bike, yet still be able to blast around town when the desire arises.

Bobby is an allround bike builder/fabricator/welder/mechanic specialist. By day he works at Motoretta Atlanta, a Vespa dealership that also works on vintage motorcycles and mopeds. In his spare time he helps out 1977 mopeds, and Team Indigen, building the ‘ripping’ motor in Indigen’s Diablo motorbike. Bobby also finds time to run Costello Fabrications, a fabrication workshop that will build anything from exhaust headers through to bike frames to furniture. Let’s hear Bobby tell us of his initial contact with the bike: ‘well it started out as a pretty nasty RD125 I purchased from the Barber swapmeet for 200 dollars, I had to drag it the half a mile back to my parking spot with a locked rear wheel’. After getting it back to the shop it was stripped back, the frame shaved of any superfluous brackets. Bobby then welded in trellis rearsets, and a high rear loop onto the frame.

The substance of this bike is equal to it’s form, with a decent amount of though and effort going into the mechanics of the bikes. A Yamaha 80 tank has had a dummy section added to it, to hide the electronic components of the bike. Braking at the front has been uprated by fitting an RD350 brake drum, the rear staying standard, both rims being supplied by Excel. Front end stability has been helped by fitting a clamping top tree, with adjustable top plates to the fork. As for the engine, Bobby was rather lucky with his $200 purchase. An initial oil drain showed no worrying signs, and after a good check over, it was decided to clean and mod the transfer, to fit 28mm Mikunis. The exhaust is made up of newly built exhaust headers, 3 midcones from some moped expansion chambers, and rebuildable silencer sections. Keeping with the ‘less is more’ idea, as well as the ‘allround bike builder’ motif, Bobby himself moulded up the badges, seat pan, front and rear fender out of carbon fibre. Having a full ‘taylor-style’ race fender, with delete headlight option, has been ingeniously overcome by fitting a headlight to the front forks. This all comes from the mind of a man who was building bikes and riding them before it was legal for him to do so. Bobby’s affinity for smaller bikes has allowed him to bring this machine into the world, and we are glad for it. I’ll finish up by quoting the builder himself:  ‘It is a terrifying blast to ride around town, revving out to 12500 rpm’.