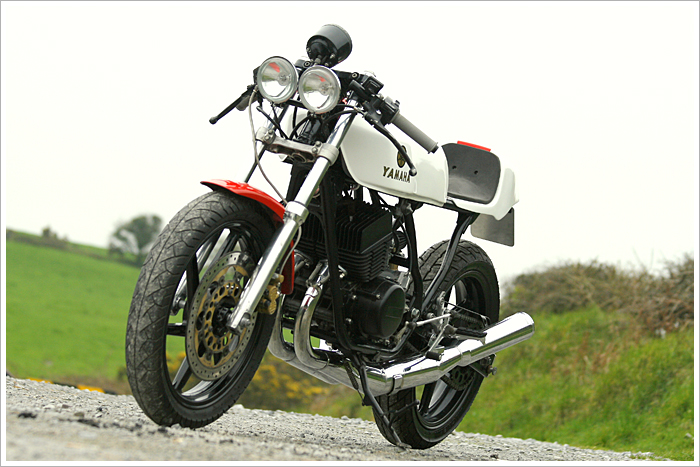 There are so many things to love about the Irish. For starters they have one of the highest beer consumption rates in the world. And when I say beer, I don’t mean some low carb, low fat, low calories, low taste beer. I’m talking about proper beers like Guinness. Secondly they love alcohol so much they even put it into coffee — combining two of my favourite things. Lastly, they are renowned for being lucky. They call it the ‘luck of the Irish’. There’s even an old myth in Ireland that if you catch a leprachaun then you will receive a massive pot of gold. Ian Harrington from Cork in Ireland might not have caught any leprechauns lately, but he has turned a pile of other peoples junk into a pot of gold — or a café racer to be exact. “I was offered an old Yamaha RD250 by a work colleague who was clearing out his garage” says Ian. Predictably, it turned out to be a piece of junk and needed a lot of work. “From the start it was never worth restoring as it was too far gone” he says. Luckily for this bike Ian had a soft spot for RD’s and decided to take the project on. Unluckily for the local pub, Ian spent many late nights in his garage instead of knocking back pints. Here’s the build story from Ian. “The second part of the plot unveiled itself to me when I was given a crashed insurance write-off Honda NSR125 by a friend. I had absolutely no idea what to do with this, but of course I took it because it was a bike after all (even if  12” shorter). Now I was looking at the two bikes in my garage and thought to myself that the  NSR swingarm/wheel may fit in the RD frame and the forks and wheel might look good on the front end. The fact that the forks were now bows and the front wheel had a straight bit where it was once curved didn’t seem to factor. In short, all the Honda bits I didn’t want were swapped for the bits I did want. I just had to mono shock the frame and fit the forks now… “I decided to build something that would look like an old TZ race bike — without spending much money. I extended the tank, (where the battery and electrics now live), chopped and de-luged the frame. Figured out and made the mono shock mounts. Fitted the Honda yokes to the head stock. Made the headlight and clock mount,   brackets to mount footrests  which are from a fireblade. I did some welding myself but the more important stuff I tacked up and got a friend, Aidan, to mig weld. Now I had a rolling chasse. I picked a wrecked TZ seat from another friends bin, repaired and reshaped it. I learned a lot about fibreglass on the way. For a long while nothing happened, three young daughters take up a lot of time (Andrew knows what that’s like), but I was always looking for parts, cheap. I even swapped a washing machine and dryer for a set of Allspeed expansion pipes with a crushed right can. I hammered out the can the best I could then skinned it with pharmaceutical stainless ducting, cut and wrapped around the can and then snap riveted into place. “Once all the mounts were ok and I was happy that I had done all that was needed to the frame it was all pulled down, frame/swingarm and everything was stripped, painted and then the assembly could start. The rolling chassis went together well. A new wiring loom was made, and a battery and electrics fitted under the tank extension. The wider rear wheel was always going to cause a problem for the chain run. Eventually I had to sort something, so I went the trickest way I could think of, using an out rigger bearing. I had a friend (Kieran) bore a bearing fit hole in a plate of 12mm aluminium, turn a shaft to fit the inside of the bearing and bore out a sprocket to fit the shaft, I drew everything out on Auto Cad and parts were made from these drawings.”

Finally the paint work was done by Ian under the guidance of his friend John. “It is not perfect, but I was very pleased with the finished for a first attempted at proper painting.” said Ian. “Primer, base coat, painted stripe, decals and top coat, ya I know it’s basic painting but it gives me a buzz when I list it out and think I managed not to mess it up.” Again proves the luck of the Irish.

Ian’s wife, three daughters and the local publican are happy the build is complete. Although Ian tells us he has picked up an old 1982 GPZ 750R1 which he is going to turn into another pot of gold. If it turns out anything like this stunning little RD250, then expect to see it soon on these very pages.