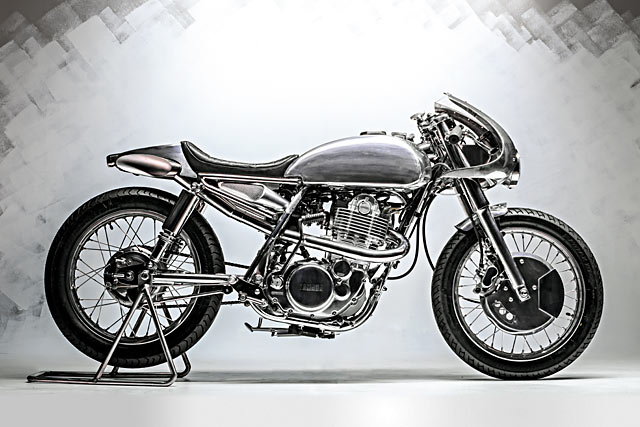 There’s nothing like a little lane splitting to raise the ire (and jealousy) of our four-wheeled brethren. While the practice in Australia, as in the US, is only legal in some states and frowned upon in others, you’d be hard-pressed to find a rider anywhere in the world that hasn’t tried it. Hell, in some South East Asian countries it’s the national passtime. But for BCR Design’s Benjie Flipprboi, a traffic jammed pick-up truck gave him a little time to daydream about lane splitting. Specifically, he wondered what a bike designed to lane split might look like? Funnily enough, it would probably look a lot like this svelte belter, BCR‘s new ‘Lane Splitter 54’ Yamaha SR400 cafe racer. A few month‘s back, Benjie and his New Jersey team were asked by a local Yamaha dealer to do some custom work on their Yamaha SR400. “On the way to the meeting where we were going to discuss the logistics of the rebuild, I got stuck in morning rush hour traffic in my pickup truck,” says Flipprboi. “One of the few benefits of being in stand-still traffic is that it is fertile territory for creative thinking. For example, ‘How cool it would be to build a bike that’s narrow enough to go between the cars during rush hour traffic?’ Who would have thought something creative could come out of all that noise, congestion and pollution?” smiles Benjie. So with that genius gem of an idea, and a revolutionary new use for traffic jams, Benjie sealed the dealer’s deal, rolled up his sleeves, and got to work. “When it was time to build the cafe racer, one of our goals was to make it as narrow as we could. With all the calibrations, we were able to trim down the donor 2016 Yamaha SR400 EFI to a tiny 54 centimeters (21 inches); hence the name, ‘Lane Splitter 54.’“

This width-first approach wasn’t just a pie-in-the-sky idea, either. They planned the whole build around it. “For most builds, we would usually start with the gas tank but with this project we started with the subframe. We wanted the bike to be light and open, and to minimize the use of body panels. The stock tail and seat frame were too wide for what we had in mind and the lines of the frame made the bike look too bulky.”

“After taking the bike apart, we cut off the rear frame and fabricated a new, triangular subassembly. Then we raised the bottom support as high as possible so that the rear wheel would be noticeably exposed, architecting a vision of simplicity and weightlessness. Next, the tail section was formed from stainless steel and bolted to the main frame.” After completing the subframe, the team moved on to the gas tank. With aluminum as their substrate of choice, a teardrop-shaped design was given the thumbs up. This was done in order to capture the essence of the stock Yamaha SR400 tank, while still giving the bike a bespoke look overall. “When fitting the tank out, we reused the stock petcock, mounted the tachometer in the centre of the tank and then custom-machined a gas cap which we mounted on the upper right side of the tank.” “The shape of the seat was designed to match the tail of the tank. We added a teardrop-shaped tail light, wrapped the seat with black distressed cowhide leather, and added a cut out on the right side for the integrated exhaust tip.” Killer touch, huh? “The scalloped-shaped front fairing is constructed of aluminum and is mounted directly to the frame.” In order to dress up the front end of the Yamaha racer, BCR fabricated some beautiful stainless fork shrouds. To match these, they chose a pair of wrap-around, low-style handle bars and added an old-school steering damper to stop the wobbles. “Then we custom fabricated the hand controls and an internal cable throttle. Finally, to capture a little of the art deco look, we made the front brake disc cover out of aluminum, adding air vents to provide the necessary aesthetic detail.”

“The foot pegs and controls are made of stainless and aluminum,” says Benjie. But it’s his next point that has us on tenterhooks; what about that amazing exhaust and intake? “The bike’s teardrop shape conveys a sense of speed even at standstill, so it was used in the design of the velocity stack and the exhaust tip.”

[superquote]“The bike’s teardrop shape conveys a sense of speed…so it was used in the design of the velocity stack and the exhaust tip.”[/superquote]

“This cafe racer project was an exciting artistic challenge. We were given the opportunity to work with the Yamaha SR400, which in our opinion is the best foundation to use for customization. There were a variety of design paths to pursue, from which we had to choose only one. Our final decision was to use the bike’s teardrop silhouette to inspire the downstream design decisions chosen for the subcomponents.” The irony here was that several other design paths were deemed equally inspiring and also worthy of pursuit. Can you imagine? “Perhaps one day, we will have the opportunity to pursue those other options,” says Benjie. Here’s hoping.