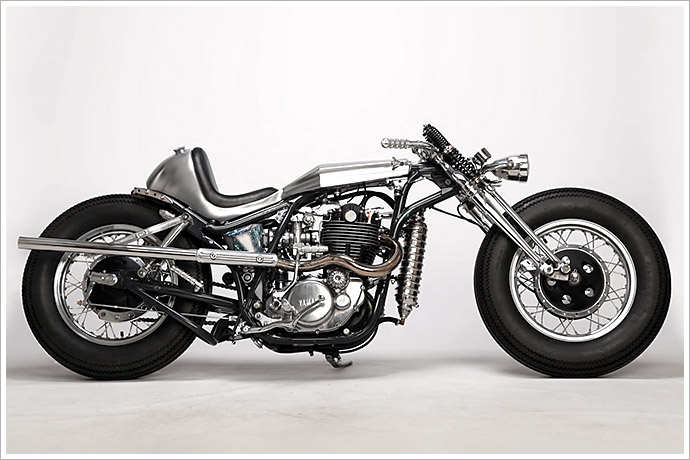 The Yamaha SR400 is still one of the most common bikes on the streets of Japan. It’s as Japanese as Sushi, Karaoke and Girl Pantie Vending Machines. Yamaha has been building these indestructable little thumpers for mucho decades, hardly changing a thing – until recently when they introduced the fuel injected models. I have a huge soft spot for these single cylinder SR’s, not just because I own one but because they can be easliy transformed into pretty much anything. We’ve seen most incarnations here at Pipeburn, mostly they’re turned into cafe racers, trackers or less commonly even bobbers. But we don’t usually see anything like this chrome creation built by Motor Rock. The guys from Nagoya have really taken this SR to the next level, building something truly unique. Sure, it has influences from Shinya, Zero and the samurai chopper, but Moto Rock have still managed to make it uniquely theirs. And we really love that. This SR400 has been named ‘Clock Work’ – which is so appropriate for this Japanese bike that runs just like clockwork. The engine features 89mm Piston/92mm stroke crankshaft fitted high performance Keihin CR Carburetor and classic K&N air filter. The front has a 74 Springer/Processing front fork fitted with one-off handlebars and Dakota digital meter. The rear features an EASYRIDERS billet suspension with one off tail light and licence plate holder. Unlike some, the guys at Moto Rock are big fans of vintage coker Firestone tires, and ‘Clock Work’ rolls on 16-inch front wheels and XS650 rear wheel. We love the stunning polished metal and chrome finish on the bike, although not sure about the touches of Japanese opal bling. The fabrication work is sensational. Most of the parts for this project were hand made by Motor Rock in their workshop, including the front and rear fender, battery case, exhaust, kick pedal, footpegs, sprocket cover and of course, the standout feature, the all in one custom seat and fuel tank. These original and creative touches are what set the men from the boys. Which is probably why ‘Clock Work’ garnered so much attention at the 20th Annual Yokohama Hot Rod Custom Show. Deserved don’t you think?