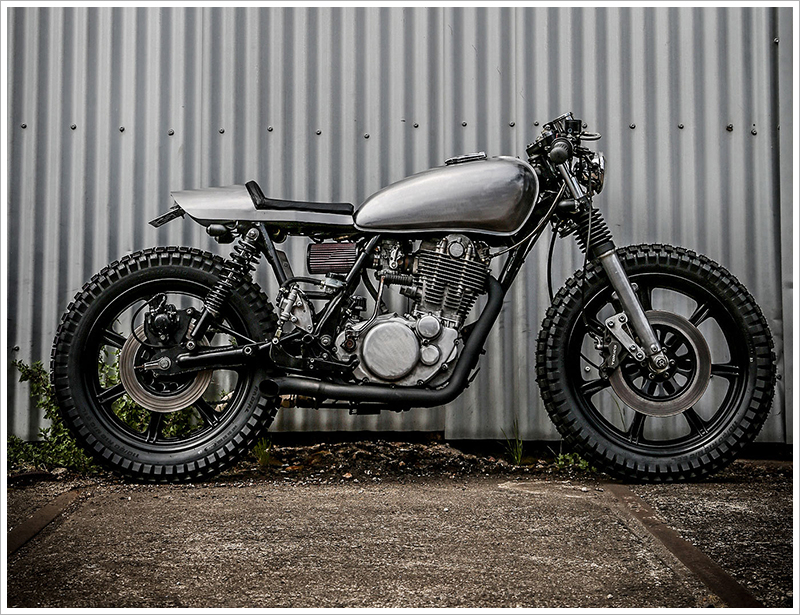 The most recent of Gasoline’s two-wheel custom work, taking the title “Tomahawk”, manages to transform one of the world’s most popular motorcycles into a custom dream machine worthy of any garage. The Yamaha SR400 has been toyed and tampered many times before. It’s an old favorite to work with, being one of Japan’s biggest selling motorcycles for over three decades. So you’d think that the platform might just have been exhausted. If so, it looks like no-one has told these Aussies; they have pushed the boundaries to create a classic thumper with a streamlined, modern edge. At first sight the transformation looks deceptively simple, but peer deeper and you can see the beautiful details that has been included by the team in their East Sydney workshop, Gasoline Custom Motorcycles, run by Jason Gasoline. Starting from the ground up, the wheels are clearly the outstanding feature that sets off the look for this build. Straight off a totaled Yamaha XS650 from a US motorcycle wrecker and based on the old-school red line BMX bicycle, these ‘tuffs’ have been powder coated in a killer matt finish. They were then hugged with a set of 18″ and 19″ Shinko Trials tyres, which Jason says were strangely difficult to source in Australia and finished with black-coated disc rotors, which resulted in a super tough look. Taking the on-trend concepts of ‘recycle’ and ‘reuse’, the fabricated metalwork throughout the bike is inventive, stylish and purposeful by contrasting a scuffed, raw finish with a simple chrome headlight and a neat silhouette. The hand-fabricated rear seat base and tail spoiler has been thoughtfully placed to hug a LED shark tail light and accommodate the LED satin black mini-bullet indicators. The thought behind the brake system was also reusable and rustic. This included sourcing calipers and master cylinders from the U.S. and Australia. What couldn’t be sourced was either made with a clever improvisation of parts from Gasoline’s stockroom or cool finds from swap meets. The crew at High Tech Mufflers were instructed to fit a superb hand-crafted exhaust to hug the contour of the motorcycle, delivering a low, deathly rumble on the streets of Sydney. The freedom of lightness, typically found on classic café racers, was achieved by stripping most of the heavy steel out of the rear-end and eliminating the ugly standard heavy exhaust. This starkness is typical of the very first café racers who realised that making bikes lighter also meant making them faster – something that never goes astray in the world of two-wheel customisation. And top to it off, the side stand gives you that awesome lean-over stance when the motorcycle is parked on the street. In fact, if it was any lower you’d probably have to turn it upside down to drain the sump. And for those of you in or around Sydney, we’d strongly encourage you to drop by the Gasoline store. Jason’s love of all things two-wheeled makes for a pretty interesting way to pass the time; whether it be bikes, Vespas, fixies or even risqué 1960s velvet paintings, Jason’s your man. Just tell him we sent you.