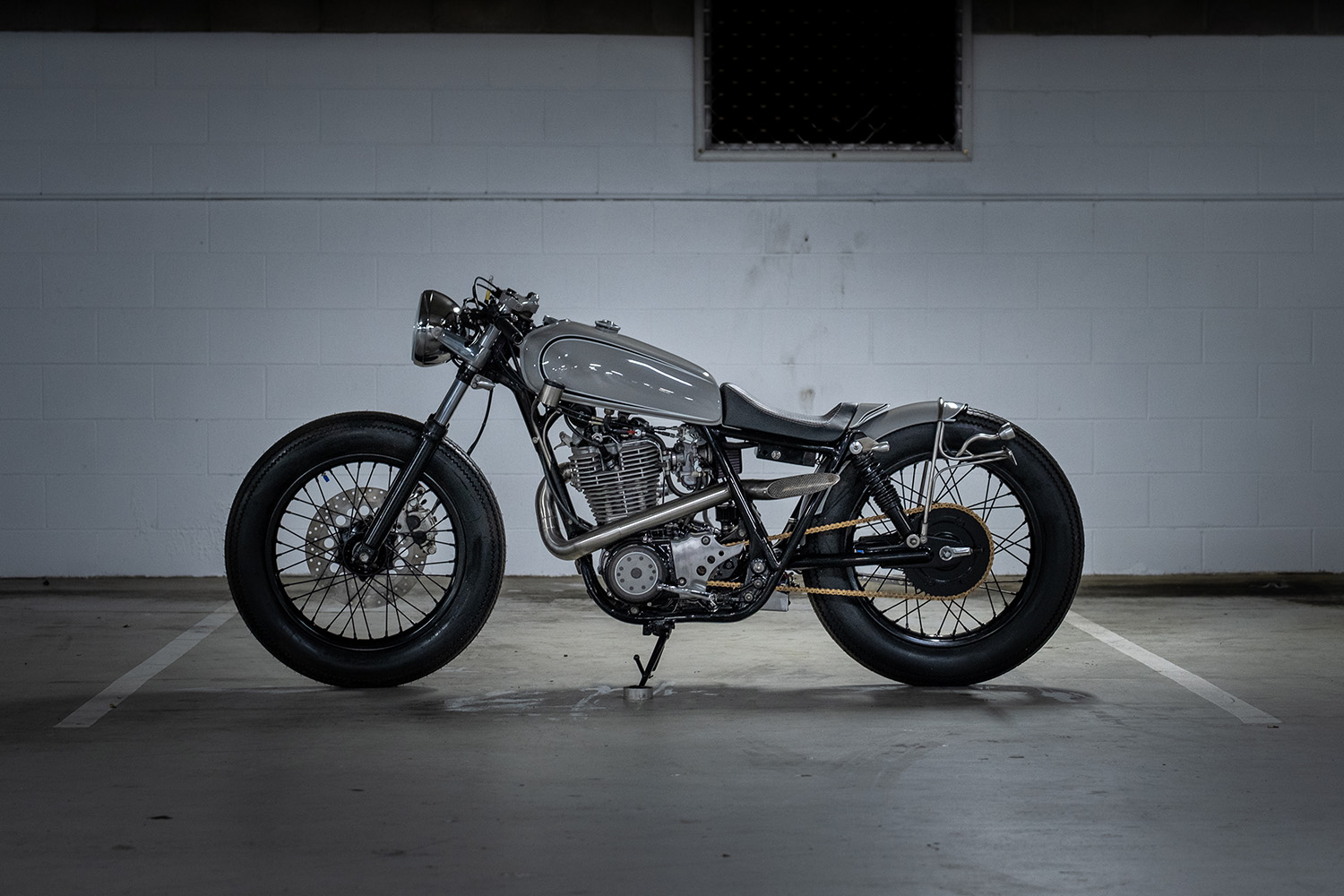 If you’ve ordered a new car in the last few years then you’re probably aware of global supply chain issues that have been crippling many industries. What was supposed to be a six-week wait for your new wheels has now become 18 months of endless frustration, and this is one case where the salesman can’t be blamed. The flow-on effects have hit just about everyone, and it’s the people at the end of the line who have been most inconvenienced. All of this meant that Tom Gilroy couldn’t put the finishing touches on this build before handing it back to its owner. But that didn’t stop the Purpose Built Moto boss from doing one hell of a job of converting a Yamaha SR400 into a blisteringly beautiful bobber.

The build commenced a few years ago until Covid-19 and supply chain issues caused havoc, but looking at the pictures Tom first sent through, I didn’t see chaos but a bike with Heiwa-like qualities and that’s about as big a compliment as you can pay. And it seems Tom was just as excited before the build commenced, “Creating something different is a hard task with a donor bike as prolific as the SR400 or SR500. So when the project rolled into our workshop I was excited about the direction it would take. An SR400 Bobber, Slammed on its ass, with a low line silhouette. FUN!”

The bike arrived at the Gold Coast shop having already undergone some previous modifications like a frame chop and a new tank. Picking things up from here that slammed look needed to be refined to function well, and building a sprung rear that looks like a hardtail is no easy task. “The previous frame mod had not allowed any wheel travel on the rear so a few modifications were made to make sure the small amount of rear suspension travel left was allowed to move freely,” Tom explains. To match, the standard front forks have been stripped, rebuilt, and dropped 40mm closer to terra firma.

“An important styling point on this bike is the tail section. Given an odd tank to work with, and the chopper-style rear fender mount the seat wasn’t fitting with the bike well at all. We started again and included a short, smooth racer-style tail cowl that visually ties the seat to the rear fender. The simple sheet metal cowl allows your eyes to flow front to back with no jarring gaps.” The mounts are picture perfect, with the fender, taillight, and plate holder all fashioned from round bar. The stainless solid bar was reamed out for the brake light, heated to allow for the flowing style and then a sweet LED Orbit light slotted in for an ultra-clean finish.

At the other end of the bike, plenty of work has been done to keep the lines of the machine, low, low, low! “Ditching the standard bars and clamp, we talked the client into a set of one-off clip-on bars, hand fabricated in-house. These flowing chrome pieces keep the low line of the bike in check and with the seating position lowered so much and mid-mount pegs it’s not bad to sit on at all. With the bars moved the top triple clamp was smoothed out, any holes welded up and finished for paint.” A classic chrome headlight, PBM hollow tip indicators, and an offset speedo keep the look spot on!

The single-cylinder engine is also not what it used to be, with the smaller capacity SR punched out from its factory 399cc to a big bore 535cc. Dressed up nicely in black with a raw metal cylinder case, it’s fed its air and fuel mix by a big Mikuni carb and a pod filter. But the standout feature of the mechanical package is clearly that exhaust, and PBM is always looking to outdo themselves with each and every build. “Deciding to sacrifice a little performance for style here. The Yamaha Bobber received a 2” exhaust straight from the header that snakes around the left side of the bike, finishing just under the seat.”

There are secret mounts, a hidden internal baffle, and that sweet spark arrester made from mesh on the slash cut, and it looks a million dollars and no doubt gives one hell of a boom. A sketch for the paint was done and then it was over to Pop Bang Classics to once again knock the finish out of the park, with a Porsche bone grey, that is complemented by black and white stripes. With the tins out for paint Tom got to the wiring, “As I always do, I segregated my ignition, charging, and lighting circuits. Linked up all the lighting and switches, with the new Reg/Rec and hidden battery, then moved through the ignition circuit, linked it all up, and gave her an almighty kick….. nothing.”

No spark, and with the 2004 version of the SR400 never sold in Australia, all of the wiring diagrams that Tom could find were in Japanese. This model had come with an immobiliser, but much of the loom and key had previously been thrown in the bin. So Tom had a mission to make it all work; with some translation help, a bypass not possible, and a bunch of clever thinking, it was decided an aftermarket CDI was needed so the bike could run without the stock key.

But that performance CDI from Japan would be seriously delayed by supply chain issues and Covid and Tom’s time with the bike was over. A bitter sweet end for the prolific builder, but one that was out of his control, although the end result very clearly makes the wait absolutely worth it.