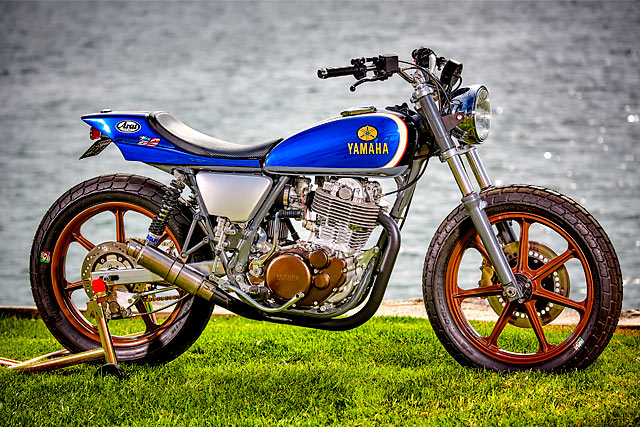 There’s no two ways about it – Mule Motorcycles build the best trackers in the world. They usually work their magic on Sportsters, with the occasional XS650 and other, more mortal engines. But they’re nearly always twins. Thankfully, for worshippers at the altar of the SR500, he’s now turned his talents to Yamaha’s evergreen single. And the results are amazing. Which may be because of the brief that Mule were given. Richard Pollock, head of Mule Motorcycles, had a bike builders’ dream brief for this SR. “This is the type of build I live for,” he says. “The owner of the bike is Sean Hutchinson, a long time aircraft mechanic. He said ‘Do whatever you want, I’ll just leave it up to you!’ That’s the best thing you can ever hear from a client or a date. So Richard, who is based in San Diego, went and picked up an Ebay special 1978 Yamaha SR500. From Kentucky. Now if you’re not familiar with American geography, that’s around 3,000 kilometers away. London to Moscow is 2,500 kilometers. For a Yamaha that’s about as common as… a Yamaha. But there’s a few reasons why Richard travelled so far. [superquote]“So Richard had a buddy pick it up from Kentucky and then put it on a truck in Alabama, and then on to San Diego.”[/superquote]

“The price was low, it only had five thousand miles on it from new and it was absolutely all stock,” he says. And it’s damn hard to find an unmolested SR. “If it’s gonna get cut to pieces, I wanna do the cutting,” he adds. So Richard had a buddy pick it up from Kentucky and then put it on a truck in Alabama, and then on to San Diego whereupon the price of a bog-stock SR500 went up a smidge. When the Yamaha arrived in his shop Richard started by stripping the bike down to the frame and cleaning up cracks and defects in the crude factory welding. He removed the tabs and added a rear frame loop to take a XR750-style seat. Up front, he added a new steering stop to prevent the new forks from touching the tank. And that’s where things with this tracker get interesting. Not one to shy away from suspension modifications, Mule changed the spindly standard forks for a set of Racetech-modified units from a Triumph Bonneville. The tank itself had an epoxy repair at the rear, so it was tidied up and sent to GTL for a proper sealing job. None of that POR-15 backyard stuff for Mule. While that was happening the engine was disassembled and cylinder head sent to one of Richards friends, Sal Peluso, who did some cutting and welded a set of larger fins to aid with cooling. With that done, the whole thing was sent to the famed ‘Mr Ed’ Steffan for some upgrades. The head was ported, a Megacycle cam fitted and a Mr Ed oil line kit fitted. When mounted back in the bike it was fitted with a 36mm Mikuni and K&N air filter and breather. Now – the wheels. Not one to do anything the easy way, Richard removed the stock Yamaha rims and replaced them with two modified KZ400 19” front wheels. With the bearings out, he bored out the centres and made some one-off bearing carriers matched to accepted standard Bonneville front and rear axles. The rear was taken to 2.75” by Sandy Kosman while the rotor carriers were made to match the wheel’s bolt patterns. Both the front and rear rotors – standard XS650 models were altered, with the rear being turned down to 10” and both ends thinned from 7mm to 5mm. They were also drilled with… …You get the idea. Mule don’t shy away way from serious wheel and brake modifications. Suffice to say that the SR, equipped with a 4-piston Brembo caliper at the front stops far better than standard. “It provides more than enough braking power!”, Richard says. And there’s a host of other little goodies going on with the Yamaha as well. The seat was completed by Saddlemen, Superbike laid down fetching paint scheme and Mark McDade fabricated the tricky low-mounted header pipe, which is mounted to a titanium exhaust. There’s Motogadget wizardry, a set of Mule flat track bars and a Triumph Bonneville headlight. It’s all incredibly well thought out and, like all Mule tracker builds, would be as gorgeous to ride at as it is to look at.