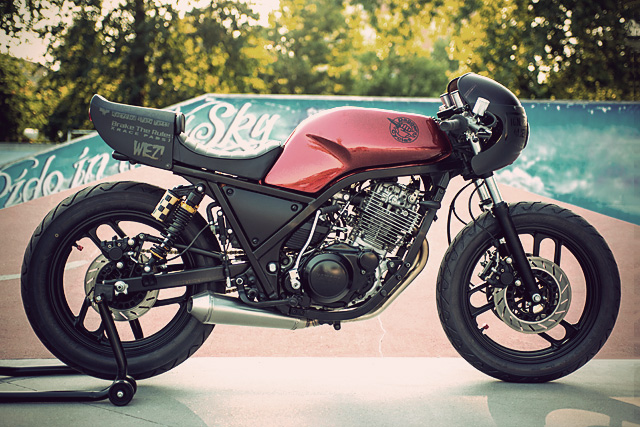 Japanese Motorcycles make up a large part of the custom scene. CB Hondas of the 70’s are everywhere. 90’s litre bikes built the Street Fighter Scene and the modern machines from the land of the rising sun are turned into everything from modern café bikes to turbocharged drag strip warriors. The gap has largely been in the period of the 1980’s where the bikes were often square in design and down on power. But the SRX was the bike that caught Roby’s eye as a young man so now three decades later as the owner of Dagger Cycles in Biella, Italy, he took the chance to build the bike from his youth. A 1986 Yamaha SRX600 in less than great condition is the basis for this punk machine and Roby wanted it to be a visual smack in the face. The engine was pulled from the frame and required a full rebuild which Roby did with absolute precision before painting the covers black and polishing the cases. The 608cc single cylinder 4 stroke punches out a healthy 45bhp and with a relatively low compression ratio it’ll do it all day long and pull from low rpms. To capture the thumper sound the exhaust is all stainless with a matching shorty muffler poking out from under the frame. Before the engine was bolted back into the frame Roby took the time to have the frame, swing arm and rims all powder coated black. One of the features that first captured the attention of a young Roberto Polizzi was the fact the Yamaha was a lightweight machine with a three disc setup. It might be considered standard now but it was ahead of its time in the 1980’s. The front stock brake discs are kept with revised calipers and Brembo radial master cylinder while the rear is an overhauled stock system with braided hose. With a dry weight of just 149kg the Yamaha pulls up in a hurry and now it’s been given the suspension to match. The front forks have totally rebuilt internals to both improve handling and match the lowered stance that saw Roby push the forks down through the triple trees. The rear was one of the last lightweight Yamahas to sport a twin shock rear, so Roby upgraded the classic look with better performance thanks to a pair of twin GAS shocks. At this point Roby had himself a smooth running, great stopping, lightweight machine but the looks just weren’t for him. A bikini fairing from an MV with a small headlight starts the look with “Ignore Alien Orders” graphics on the right side, a hint at Roby’s way of thinking. The tank is stock but has been given a heavy flake paint job in Cherry Red with the Dagger Cycles logo. The tail section is handmade from fibreglass in a matte finish and sporting some unique race graphics. The seat is a clever reworking of the standard item that fits up to the tank perfectly and is finished with custom stitching. While the rest of the body work like the side covers and oil reservoir were finished in matte black to blend more easily into the frame. To get the riding position he was after Roby mounted the clip-ons in an inverted position that when viewed from front on gives a flat bar look. To reduce clutter the switch block is from an enduro machine and the speedo is all the visuals you need straight from an RD Yamaha. With a Brembo item on the right side clutch duties are taken care of by a Renthal lever and MX grips for your hands. The rear lights for roadworthy are round units integrated into the tail with bullet indicators to match. Dagger Cycle don’t follow trends and Roby is unapologetic about that fact, they build what they like and if it doesn’t match what’s trending then even better! “Maybe the only problem it had is that it belonged to a period, the mid-Eighties, in which the classic shapes of the old bikes were changing into something new.” “That bike was a little ‘messy’, but on another side, it was a good start for such a different project.” And different it is, a 1980’s Japanese machine, built by a Punk from Northern Italy, designed to look mean and shred the streets. Roby is not after your approval but he’s earning a lot of respect and the heavily tattooed, beard sporting builder has built an SRX to intimidate all others.