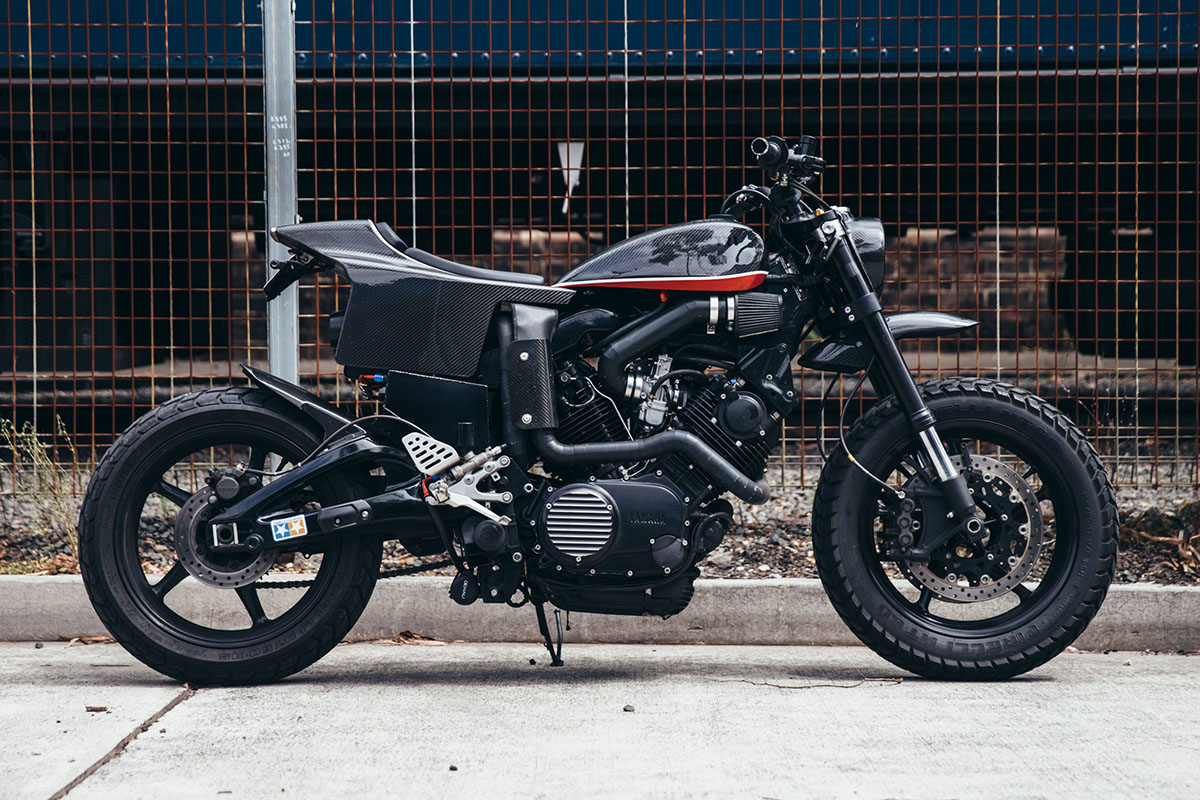 Some people look at the night’s sky and see the stars and not much more, a passing admiring glance. Others look to the heavens and see black holes, supernovas and the beginning of the universe itself. The humble motorcycle is much the same, we can walk through a pack of old bikes and have some appreciation, but there are a certain some who will dig deep into their imagination and envision that pile of nuts and bolts as something totally transformed into their dream creation. Kent obviously has that look in his eye for the Yamaha TR1, and with the expert skills of Darren Millichamp of DNA Custom Cycles, they’ve created a carbon-clad assassin to dominate the Sydney streets.

Most cast their eye over the 1981 TR1 and see the potential for a HD-inspired cruiser, a metric V-Twin that benefits from a strong aftermarket. But Kent saw something different altogether, sure the engine is the primary benefit, but why be restricted to the laid-back life of high rise bars, when you can take that torque and turn it into a tyre shredding tracker. From motocross bikes as a youngster, he finally found his way to the street scene via a BMW R65, before turning up the temp and using the big BMW K1100 for a full killer custom. This experience left Kent knowing exactly what he wanted in a bike that would stay by his side forever.

With the TR1 in his possession, a bunch of parts were ordered that would help the transformation, but let’s start with the engine. Most people slap on an exhaust, change the air filter and call it a day, but Kent had dreams of a truly thunderous monster. So the barrels came off and were bored out and in slot a set of high-quality Arias pistons that pump the capacity out to 1065cc. To make the most of the extra cubes meant giving the heads the hardware they required to keep up, and custom cams and heavy-duty springs transform the SOHC top ends.

Snap the throttle and that power pours on in an instant thanks to the rapid fuelling of a set of Mikuni TM40 flat slide carburettors, which draw their air via a set of custom ram-fed intakes. Then the exhaust allows for the gases to escape in a hurry, with a custom constructed pair of pipes hugging the engine hard, keeping the lines narrow, before venturing up under the seat and exiting out of twin cans. With the engine almost completely blacked out, save for some file finishing on the covers, the rear cylinder in particular hides away and helps to disguise the bike from being instantly recognisable as a TR1.

Much of that visual impact then falls onto the shoulders of that incredible carbon fibre tank and tail package. This comes from Spain’s Bottpower, where engineer David Sanchez shares Kent’s passion for turning a host of bikes into that custom tracker theme. Despite the difficulties of that pressed steel frame, the custom carbon tank slots over the backbone and looks like it was made to order. The tail on the other hand required quite a bit of extra work to get it to fit, the subframe getting a full custom make-over and, room left for those mufflers to hide underneath.

There was just one problem with that tank, it only holds 7litres of fuel, and with the new monster motor, that small capacity would leave this machine only capable of very short journeys, but Darren had a solution. “I understood the tank was the tank and that wasn’t going to change, so we started to look at options to create an additional overflow tank running its own pump back to increase the capacity. Being a TR1 there wasn’t much space to play with, and this part of the build was probably the most frustrating part, however, we settled to sliding it under the tail and in-between the swing arm and exhaust, giving the bike an additional 5L capacity.”

Now to make this bad boy handle and Kent and Darren came up with a very Yamaha solution to turning the slow steering cruiser into a razor-sharp sportbike experience. Most stick with the stock TR1 swingarm, not here, an alloy unit from an R6 slots into the customised frame to instantly give one hell of a serious transformation. Staying in the Yamaha catalogue, a rear wheel from an R6 made perfect sense and the same Supersports machine provides its braking system. At the front end, the big boy of Yamaha range, the R1, donates its forks, wheel and brake package, all of which are able to fit into the much older machine thanks to Darren’s skills on the CNC machine.

To give himself the right tyre, Kent studied the field and picked out the Pirelli MT60RS, which offers plenty of grip on the tarmac, while also being useful on a loose surface. The electrical package needed an overhaul to provide a reliable ride, and Motogadget components in a DNA custom housing make for the perfect combination. Motogadget also supplies the speedo and sits above the carbon surrounded headlight for a slick front on feel. LSL bars, Extreme Creations switchgear, adjustable levers and a host of other touches finish off the build.

At its heart, this is a 1981 TR1, but thanks to Kent and Darren, it’s now a modern road warrior that is simply like no other machine anyone else has imagined.