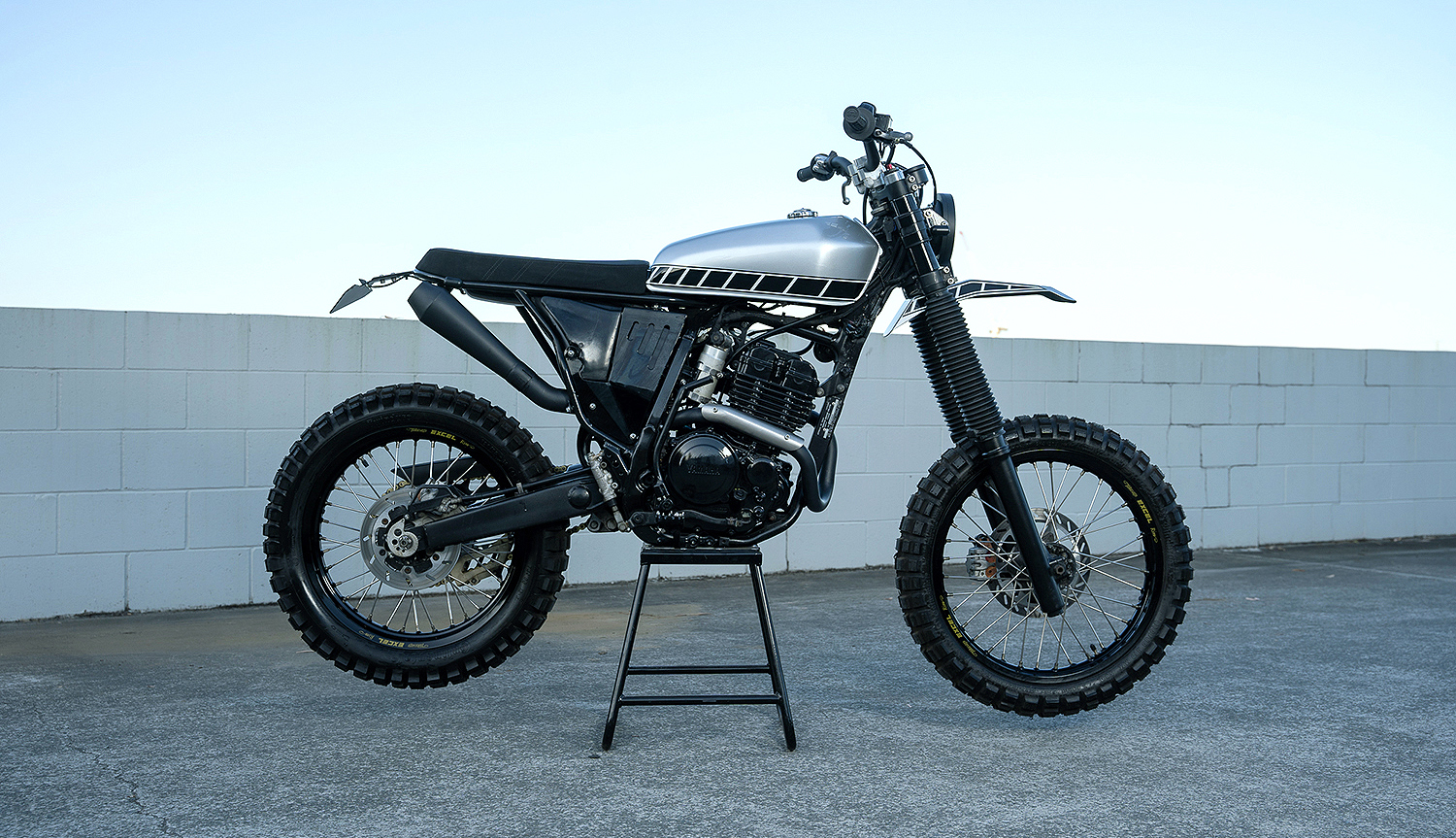 To build a scrambler you really can start with almost any motorcycle you like, we’ve seen everything from factory superbikes to little scooters get the treatment. But just because you can, doesn’t always mean you should and the best donor is usually going to be the one already most suited to the type of roads and terrain you wish to tackle. If you’re living here in Australia that’s going to be everything from the odd muddy paddock, to a few dirt roads and some tight city streets. So, to get that done, Tom Gilroy the owner of Purpose Built Moto started with the humble little, do it all motorcycle, the Yamaha TTR250. And from cheap and cheerful farm shed filler, he’s transformed the little single into one stunning all-terrain thriller.

When the 1999 model rolled into the Purpose Built Moto shop, it was evident it had lived a hard life providing fun to plenty and also having undergone a not so good makeover. “The previous owner had stripped all the plastics off the bike and fitted up the ever popular CG125 tank, while the idea was there the execution was lacking with an ill fitting seat, flimsy tank mounts, some questionable fabrication work and some even more questionable wiring,” Tom explains. Not ideal! So the Yamaha was stripped back to its bare bones and readied for a full PBM rebuild.

To transform the back end of the motorcycle and give it both form and function, the subframe area has come in for a host of smart touches. The stock airbox has been retained and the battery box modified before the frame rails themselves were simplified for an ultra-clean look.

The now hooped rear end features a very cool PBM number plate holder and a host of vital components have been cleverly hidden away under the seat. With the massive dirt bike plastics long gone, a sweet set of side covers not only act as functional pieces but also add a nice touch of hand-built style.

“Next was to level the tank and mount it properly, we see this a lot with custom or swapped tank bikes, arguably mounting your new tank is the most important part. So we spent some time to make sure the tank is secured properly with the factory style rubber mounts welded to the frame,” Tom tells us.

The clever fab work continues with an all-new high mount fender, handcrafted in an MX style, it really helps to define the character of the motorcycle. The paint that covers the bodywork is a classic mix of glossy silver, broken up by beautifully laid down speed blocks in contrasting black and white.

To match the look Timeless Autotrim made up a flat scrambles style seat, with generous foam for comfortable riding, and all covered up with Alcantara sides and black gripper on top. To keep the rider in full control the bars have been replaced with a low bend Pro Taper setup, with new levers and a better master cylinder from a Kawasaki Ninja 250. “The 3 button PBM switches run to a Black Box module under the seat which controls the 5.75” flashpoint headlight, and the 3 in 1 indicators used front and rear on the TTR250 scrambler.”

The total mechanical package of the bike has also come in for a full overhaul, and it’s the quality of this work that determines just how well the bike will ride. So to sort out the well and truly stuffed rear shock, Charlie Costanzo was tasked with giving it a full rebuild and upgrade, while back at PBM the boys gave the front end a similar work over. To get the rolling stock right the stock wheels have been rebuilt with black Excel rims measuring 19in at the front and 18in at the rear, and then wrapped in the ever-popular Continental TKC80 tyres.

Having no doubt copped a good flogging in its day, the engine needed a rebuild and now PBM have a new service for everyone with a motor that needs mending. “We’ve recently brought an engine builder and performance mechanic in-house here, operating under the name Purpose Built Performance. Now offering engine builds, repairs and servicing on anything your usual mechanic deems a little too old, or a little too difficult. The TTR was treated to a completely new top end, including new valves, springs and some porting work to get it breathing a little easier.”

To ensure the fuelling was spot on the stock carb has been rebuilt back to new condition and a full exhaust system built, complete with ceramic coating to keep the hot gas inside flowing fast and finished out with a PBM Torpedo muffler to give just the right sound. “We’ve linked it up to our lambda tuning system and dialled it in to start, run and ride perfectly,” Tom smiles.

And those smiles continued as he took it for a shake-down blast to make sure everything was spot on, instantly reminded of the simple joys of riding such a well sorted scrambler. Nimble and naughty it’s off to its new owner and the TTR250 proves once again that good things very often come in small packages.