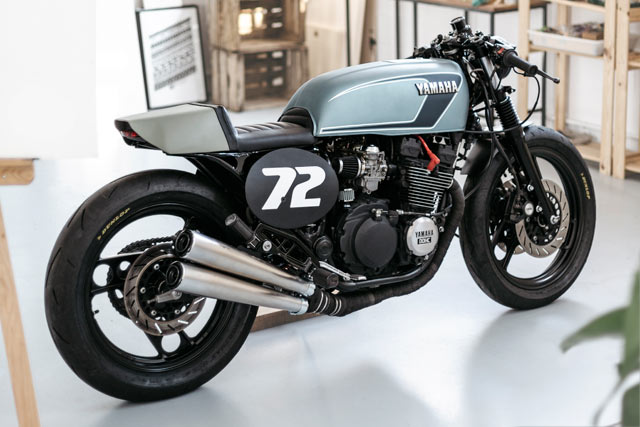 There’s a whole lot of customs out there that fly pretty close to the definition of cheating. You can do up a SR500 to look like an old school cafe racer easily enough and bikes like the W650 come as a pre-packaged halfway point to a great looking custom. But most bikes post the 1970’s require a finer touch and more critical eye – like this 1985 Yamaha XJ600 produced by The Foundry Motorcycles. Carlos Ormazabal heads up the small workshop in the town of Parla, just outside of Madrid. And recently they’ve been moto-typecast when it comes to builds. ‘Since we launched our K75 Street Tracker most of the orders coming in have been based around the K series,’ Carlos says. ‘But we like all motorcycles and any platform can give you the chance to build an interesting bike’. [superquote]“But Carlos and the team were… drawing inspiration from a digital design concocted by a Portuguese architect”.[/superquote]

That’s true, but some models are easier than others. Take this XJ600. Later known alternately as the Seca and the Diversion, it was a Japanese sports-oriented semi-faired inline four that’s about as exciting as… well, a sports-oriented, semi-faired Japanese inline four. But Carlos and the team were about to change that, drawing inspiration from a digital design concocted by a Portuguese architect. ‘By chance I discovered a digital render designed around the XJ600 on the internet by Capêlo’s Garage,’ Carlos says, ‘I liked it so much I thought why not build a bike around that?’ Unusually, the first thing that Carlos and his team had to do was to find out if the bike had already been built by somebody else. Thankfully it hadn’t. The next step was equally out-there. ‘I had to identify the parts that Capêlo’s used in the design,’ Señor Ormazabal explains, ‘mainly the fuel tank. But it wasn’t difficult to recognise the shape of the CB750 Supersport.’ But locating one proved more difficult. ‘It took me a long time to find one in good condition here in Europe, even more so at a reasonable price. With the help of Daan from Adonis Motorcycles I managed to find one on eBay in Germany. It’s a rare model outside the U.S’. Then the real work started. The Yamaha XJ was completely disassembled and the frame and engine given a thorough going-over. The frame was cut and painted – but with local Spanish laws firmly in mind. ‘We left the frame as legally short as possible to match the design, but with the ability to run a bench seat as well,’ Carlos says. With that came The Foundry’s first foray into fibreglass for the seat unit and side number plates. The refreshed engine was fitted with rebuilt carburetors and a new 4 into 1 header system was fitted, which splits into twin mufflers. Underneath the bike it runs near-slick Dunlop Sportmax Alphas. To get the lines right, the team shortened the front forks by 55mm and mounted a pair of clip ons. A minimalist MMB Speedo and LED idiot lights were mounted on a custom-made bracket up front.

The end result is a XJ600 that’s been turned into a gorgeous racer, with beautiful matte paint and a mean, low stance. That the bike started life as a middling middle distance Universal Japanese Motorcycle only makes me appreciate the guys from The Foundry Motorcycle even more. I think Carlos and the team can set aside their K-series builds – I’ll bet the shop are going to be producing a few more Yamaha XJ600s in the coming months.