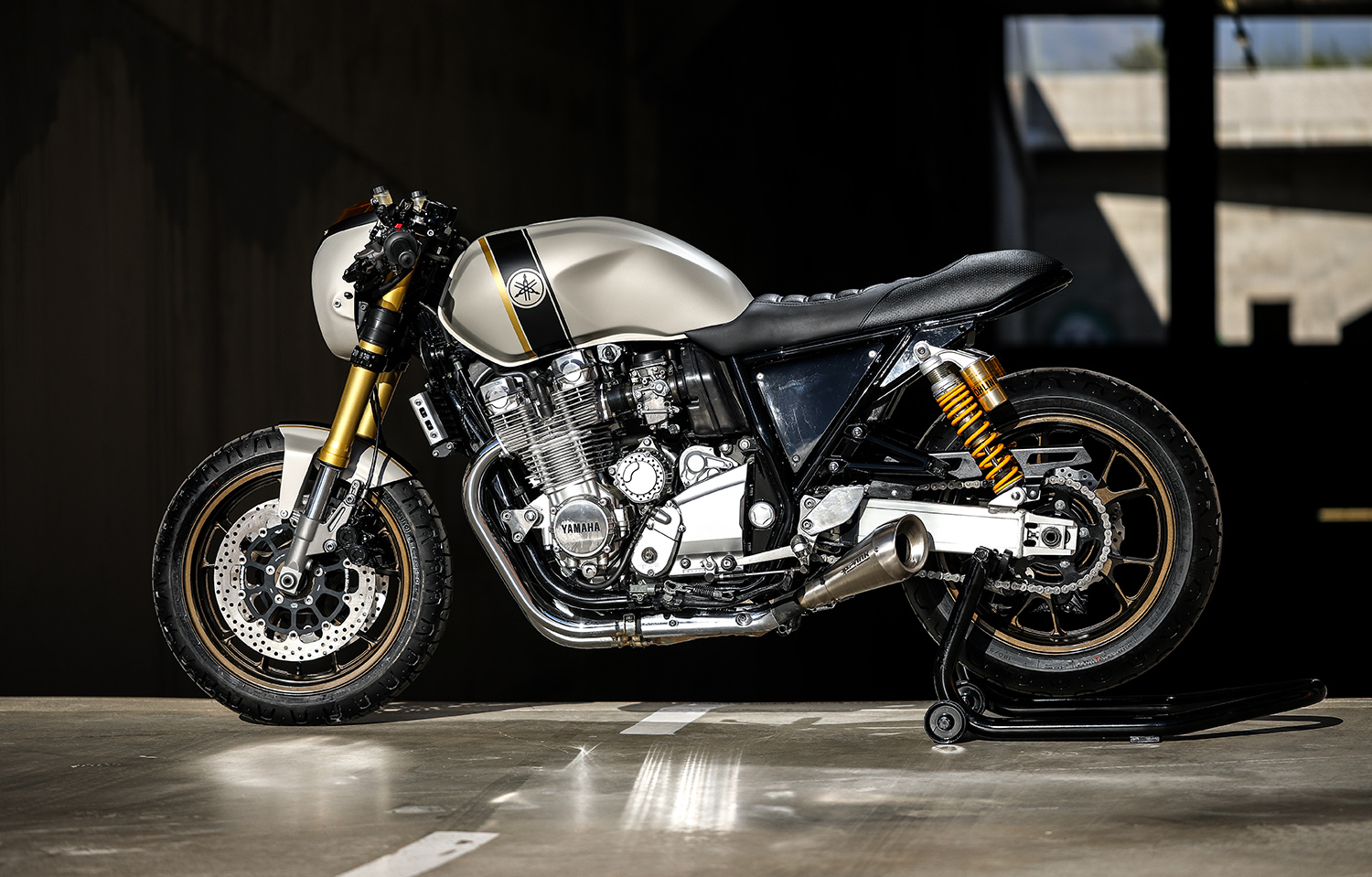 Whether your passion is for custom bikes, cars, or any other hobby that to the outside world looks like it’s unnecessarily expensive, you’re going to need an understanding partner. One who doesn’t throw your stuff on the lawn when they see you’ve just written a cheque for your third engine build in three years. Not only has Žiga Petek found that kind of love, but his girlfriend is just as crazy about two wheels as he is. But having hit the jackpot, the owner of Slovenia’s Gas & Retro, gambled it all when he traded his girlfriend’s custom Harley for a stock Yamaha. Thankfully, she didn’t have to worry for long as he set about building this bad to the bone XJR1300 that they lovingly call ‘Buffalo’.

Žiga is a bike mad kind of guy, he loves them, and the 31-year-old always has ten or so bikes in his shop to be worked on at any one time. The custom scene isn’t as big in Slovenia as the rest of Europe, with litre sports bikes tending to be the flavour of the day. But our man from Gas & Retro, who works out of a converted barn, owns everything from a Ducati 900SS to an old shovelhead powered rigid, and a modern Dyna with a Screamin’ Eagle 110ci for power. His girlfriend had a sweet custom Sportster, I say had because when a customer took a fancy to it and offered to swap his XJR and some cash for the Sporty, Žiga said yes.

Now he just had to explain it to his girlfriend who must have been looking at the plain jane XJR and been scratching her head. But Žiga had a plan, the extra cash he’d gotten they could put towards their house and the big Yamaha he promised he’d build into a killer custom. “Never mind the house I really loved this XJR, it’s classic and it has enough power to be a superbike,” he smiles. So, with a new bike to build he dived in with the enthusiasm for two-wheels that radiates from his soul and got the Yamaha into a roller. The first thing he knew was off were those twig-like front forks, undersized and embarrassing on a 222kg retro muscle bike.

With the entire front end removed, he found a suitable set of Showa USD forks and then set about modifying the stem and triple trees to fit. During the process, he custom made the front half of the top triple into a speedo holder, and left the risers should a new owner want to run flat bars. Our man however had no such intention and fitted TRW alloy clip-ons. The stock wheels are the plain three-spokes that are fitted to half the bikes in the world, but a perfect replacement was found in a set of ZZR1400 items that give the bike a more modern feel and wrapped up in new Pirelli rubber give the grip he was after.

With the decision to run some new Ohlins shocks at the rear, the front forks were anodized gold to match. Now with the suspension beefed up, the brakes were to follow with thumping great big discs clamped by four-pot calipers at the front and a new wave style disc at the rear. Then with the foundations laid, Žiga could get to work on making the bike look the part. With the rear end so big you could seat four people on it, the grinder was out and the subframe cut off, with a new loop welded in place. Underneath the new rear, the plastic side covers were removed and a new set fabricated from alloy to fill the gap.

“Due to the aggressive and supersport look I wanted from this classic bike, I made an aero front fender from scratch and put on a mask that kind of matches this fender and style of the bike.” Behind the new mask goes a Koso LED headlight and above is a small yellow lensed screen that completes the look. With the big factory tank body worked back to new condition, the tins all sat in primer for over a month as Žiga tried to decide on a colour scheme. With the help of his good friend Matej Mrzlikar at MMcarpainting, they settled on the stunning matte base colour with black and gold stripes as accents.

The inspired choice works brilliantly with the fixtures and fittings of the big machine and only gets better with the addition of the new seat. With a base shaped and made, it was over to Mitja Bizjak, who picked out a paint matching black leather and then expertly stitched it all together in a neat swooping style, that can still hold two-up very comfortably. Wanting to keep the forward heavy look of the bike, the rear lights are tiny Kellerman Atto combo units to handle both braking and turning signals, with their catalogue counterparts used at the front end too.

The beautiful new speedo slots in at the front and looks a damn sight better than the original instruments. Before the bike was finished out with twin Nissin master cylinders, that are fitted out with a set of TRW aluminium levers to match the clip-ons. But there was something missing, the engine purred like a kitten, but it didn’t growl. The solution, a pair of incredible sounding Sparks slip-on mufflers that finally give the big XJR1300 the soundtrack it deserves.

Sitting proudly on his new beast, Žiga could see the Buffalo tattoo on his knee gazing back at him. It was then he chose the name, only to dismount and realise that the barrel-chested bike was much like the stampeding beast. It’s clear the Gas & Retro name has a strong future ahead and with his girlfriend now onside, it’s been nothing but winners and grinners all-round.