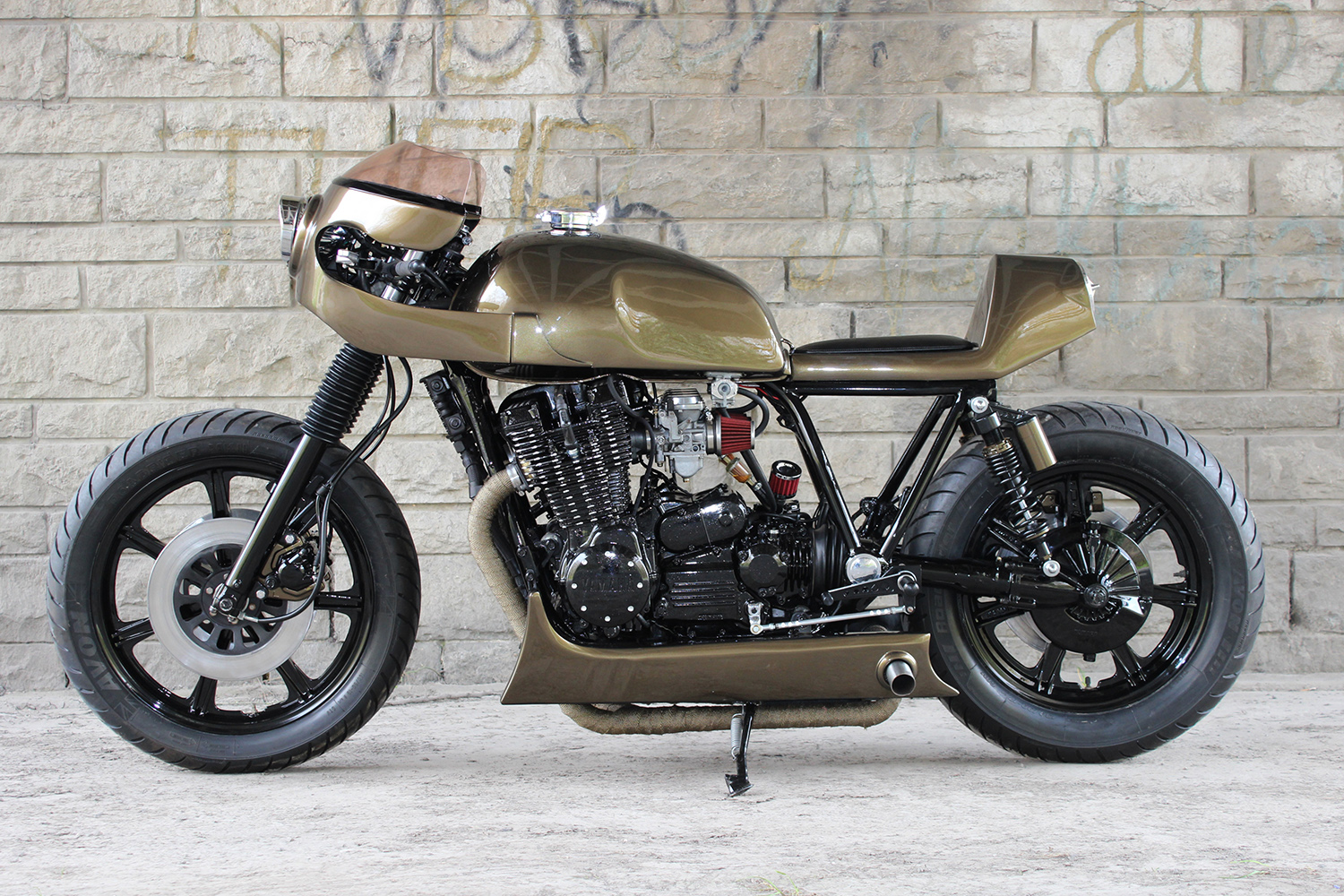 Forty years is a long time in motorcycles, and where once upon a time a manufacturer could have a successful touring bike by just bolting a big motor into an existing frame, these days people want all the creature comforts of a first-class flight. But that is where hot rodding comes in, taking that basic combination of a thumping engine in a simple chassis and stripping it back, making it quick and customising it to call it your own. On a mission to build such a project at home to test out the full suite of his mechanical skills, Geoffrey Viola went on the hunt for a big block bike and has taken this 1980 Yamaha XS1100 all the way to create a slice of Americana in the heart of Europe.

The first four-cylinder produced by Yamaha had instant rivals in the large capacity motorcycles of Honda and Suzuki, which were much more sporty in nature. But with its big smooth engine, unbreakable shaft-drive and easy to tune chassis it dominated endurance racing, particularly in Australia. “Nobody gets far riding the XS before they become acquainted with the fact that it’s strong; we had ridden ours over hundreds of open-road miles before going to the drag strip and knew it was a bullet…, the XS is a Rolls Royce with a blown Chrysler Hemi motor!” Cycle Magazine said at the time.

And that’s exactly why Geo, married with two children, went on the hunt for his own four-banger Yamaha. “I bought this bike in Liège in Belgium, which had been abandoned by the owner for several years. The idea was to start from an old bike and bring it back to life by transforming it into a resto-mod cafe racer.” Having started with a drawing of exactly what he was looking to create, Geo knew the XS was the bike for him the second the pencil dropped from his hand. Now with one at home in his garage it was time to get down to business.

The bike was completely stripped, every component would be rebuilt, but with a bare frame as his template he started on the monumental task of taking this once naked machine and dressing it up in a full set of one-off custom clothes. The front fairing was first and starts with a mould made from reinforcing bar sized steel that was bent to shape and tacked into position. Around this structure Geo could roll, stretch and hammer sheet metal until it conformed to the final shape, with the mould acting as a supporting structure on which to work the whole time.

Cut from the bar, it was sanded back and ready to paint. Getting the tank to match involves some subtle work to smooth out the lines, shape and exaggerate the knee dents and give it a more flowing profile. Then for that hot-rodded vibe, the Monza filler cap and fitting is grafted on for a chunky slice of chrome. But it is the rear view that does the most for me, with the frame cut back to allow the bodywork to extend out on its own, you can’t help but keep your eyes glued to that stunning ’63 Chevrolet Corvair light; it’s perfectly french in to the new tailpiece.

The seat is kept minimal, very minimal, but Geo wanted it that way and given he’s the one riding it, that’s how it should be. The final piece of metalwork is the custom side skirts, not a common modification seen on bikes, but theme fitting at its finest. They help to frame the big engine beautifully, but the motor needed a full rebuild and it was pulled down to every last nut and bolt. With new seals and gaskets thrown in, everything was built back up with a lick of paint along the way. The shaft drive too has been overhauled and painted before a new boot joins the two.

To give the big Yammie the smooth fuelling it was always known for, the stripped-down carbs are rebuilt, polished up and then jetted for the open pod filters that let it breathe. The exhaust system is as hot rod as it gets, neat headers that are wrapped up like a Nascar of old and then from the centrally located muffler they bark side exit style for a mean effect! With the driveline back in the frame, the tins were painted up in Geo’s own mix of titanium coloured paint. With an old school chopper headlight added to the front end.

The suspension has come in for a full overhaul, the front forks have been treated to a set of progressive springs on the inside and gaiters on the out. The rear shocks too are progressively sprung, with some extra preload dialled in and the reservoirs painted to match the body. The big XS is no a runway model, so the brakes have been rebuilt front and rear to ensure stopping power is back to its best. With a custom set of footpegs and linkages working with the inverted clip-on bars for a mean looking ride. You simply won’t see anything else like it on the road, just how Geo wanted, and while his XS isn’t designed to cover big miles, it looks bad to the bone just cruising the block.