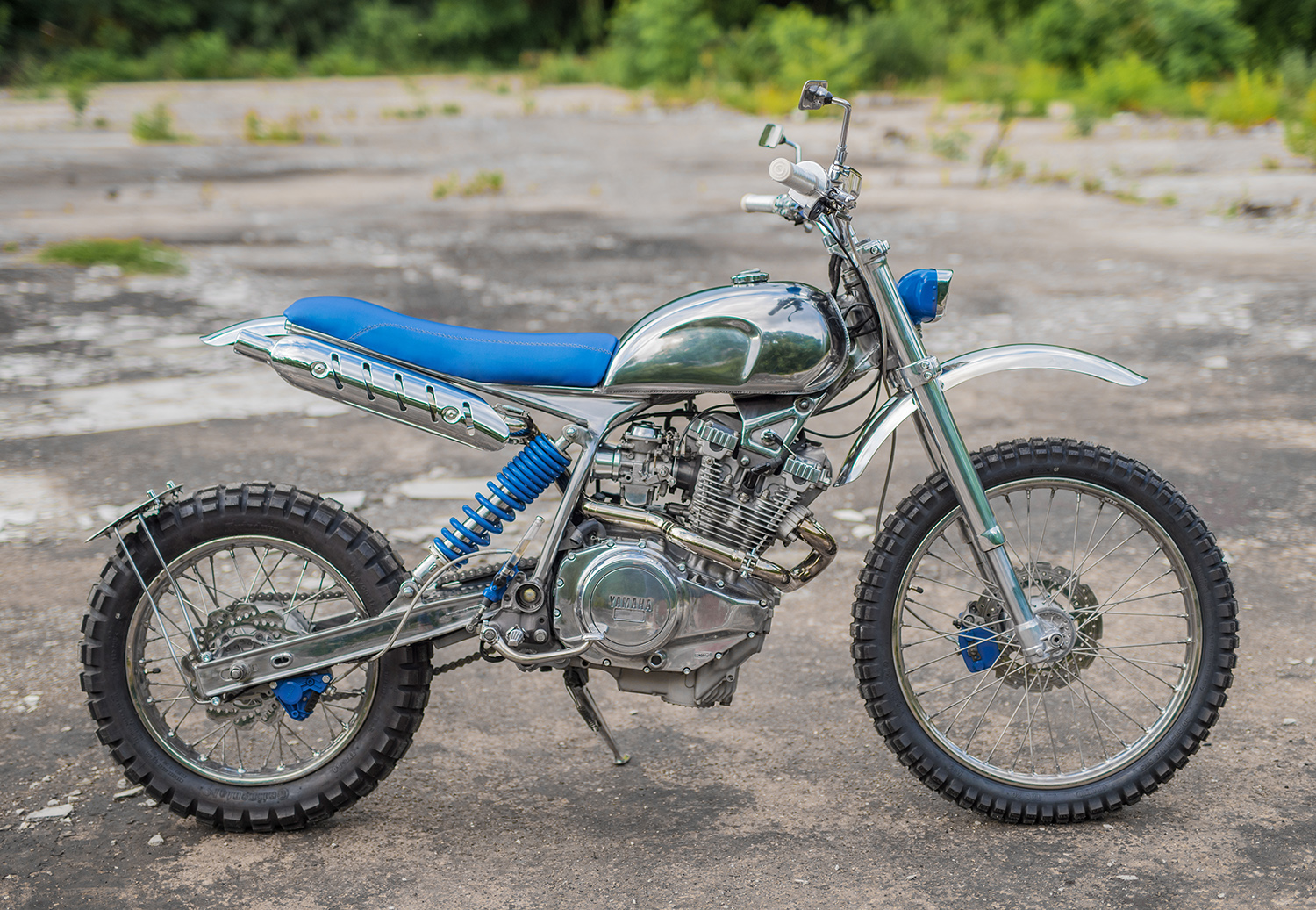 ‘Built not Bought’ is a phrase that has jumped up across the custom bike and car world for as long as chequebooks have been around. There is no doubting the immense satisfaction that comes from building your own machine, but the reality is that many write the cheque because they lack the time, tools or talent to get the job done to the level they desire. So one very clever man found a way to get as hands-on as possible while utilising the skills and equipment of a seasoned professional. Viktor Dikanchev teamed up with his local custom outfit, ‘The Box’ in his hometown of Sofia, Bulgaria. Together they took a modest 1982 Yamaha XS400 and turned it into a magnificent all-metal Moto-X machine.

Viktor hadn’t really been lusting after an old XS or looking across the internet to find one, it was more a case of seeing it and wanting it. “I saw it parked on the street one day and impulsively decided to leave a note, letting the owner know that I am interested in buying it. He called me the next day and we made a deal.” Stock as a rock the mid-sized ’80s commuter bike had seen better days and the styling had well and truly dated. So knowing he’d need to overhaul the bike mechanically as well as do plenty of custom work to get it the way he wanted, he went in search of a partner in crime.

“I contacted Krasimir Tananeev, who is the owner of The Box. We came up with the idea of completely transforming the boring mundane mass produced cheap transport that is the Yamaha XS400, into a bespoke and totally custom scrambler. I had just two conditions: I would be actively participating and helping with the construction of the bike, not just paying him to do all the work and the amount of paint would be absolutely minimal, with the majority of the bike being left as bare polished metal.”

To get the build underway the engine was pulled from the frame and completely disassembled to determine how well it had held up over the last 40 years and who knows how many miles. On closer inspection the internals weren’t too bad, so the top end was lapped to ensure good seating and new valves fitted. Before the entire engine was built back up using new gaskets and seals, with everything adjusted back into factory spec. On the bench provided the perfect place to polish the donk within an inch of its life and the Mikuni carbs get an overhaul, the same rub down and then fitted with polished velocity stacks.

Next, the frame was stripped of absolutely every last part and Krasimir simplified the subframe to suit the style of the bike the boys were piecing together. With that done the frame was sandblasted to a clean and smooth finish before once again it was time for endless elbow grease to polish the entire chassis to a mirror finish. With Viktor up to his arm in Autosol, Krasimir was taking a good look at some Aprilia parts that were sitting in a corner of the shop. The swingarm, wheels and full front end he decided would be perfect for the build.

But before they could come and play with the other parts, they too would be disassembled and polished to perfection. To make the rear end work a new mount had to be fabricated for the frame and a new Royal Enfield Himalayan shock absorber used to control the Aprilia swingarm. At the front, the appropriate bearing and steering stem changes were made and the entire front end assembly from the Italian was merged successfully with the old Japanese steel frame. The brakes were rebuilt front and rear, the master cylinder for the back adapted to fit and the bike was nearly ready to roll.

The final piece in that puzzle was the addition of Continental TKC80 tyres to wrap up the lightweight rims. Now the bodywork could really begin to unfold and a set of Honda CB fenders make for the perfect off-road additions; who would have guessed! The headlight is from an old Bulgarian tractor and has been retrofitted with LED internals before the casing was painted blue. The only other paint on the bike is the brakes and rear spring, with the other pieces of colour the stunning seat that sits over the top of a Krasimir crafted fibreglass base and his own ‘The Box’ bar pad.

Nestled under the universal gas tank the lads chose for the build, that truly gives it a classic appeal, is most of the wiring with the battery hidden neatly in the swingarm. Then to finish off the build a stunning exhaust has been fabricated, two into one headers merge into a single link pipe that runs rearward through a polished frame shroud. Then to finish it off is a heat shielded, vintage look, muffler from a Triumph Scrambler. An inspired selection that along with the rest of the final touches in the form of new bars and controls ensure a cohesive collaboration comes to an end in a bike that appears to have simply come from one solitary master.