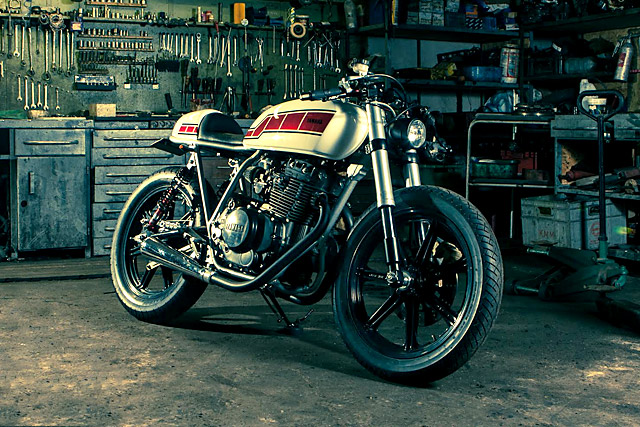 The phrase second time lucky tends to suggest that the first time around didn’t go as planned. For Sander Ziugov of Volure Cycles and his Yamaha XS400 all was looking perfect when he converted his stock red Yamaha into a stunning grey on black café racer. So good in fact it was featured right here on Pipeburn, until a misadventure saw the bike tumbling down the road. With the original forks now consigned to the scrap bin the decision was made to convert the bike to a USD setup. Aprilia RS125 forks were adapted to fit the bike using heavily modified triple clamps to work with the standard Yamaha frame. Turning duties were handed over to a set of custom clip-ons, while GSX-R switch blocks continue with the modern look of the front end. Ensuring continuity in the theme, bar end turn signals were fitted and replacing the now damaged gauges is an all-in-one instrument unit by KOSO mounted to a custom-made bracket. No modern front end is complete without a quality brake master cylinder and when only the best will do Sander chose Brembo.  A radial design was fitted to send hydraulic pressure to the original caliper now relocated to the left side of the front wheel using a custom-made bracket crafted from 15mm aluminium. Rounding out the stunning front end Sander fitted a single dominator headlight and moved the ignition switch to the rear engine mount. With the Aprilia forks changing the stance of the bike Sander turned his attention to the rear end. To achieve the aggressive stance he was after new shock mounts were welded 60mm down the sub frame and YSS shocks with progressive rate springs fitted. Rather than cut off the now empty standard shock mounts they were repurposed and now house the rear turn signals. The striking difference from the first incarnation of this bike is the paint, gone is the classic grey with speed stripe and in its place distinctive red Yamaha “Speed Blocks” laid over a solid white. While many of the black detailing work remains the frame has been painted silver to further enhance the colour matched Yamaha respray. Staying true to the race theme undamaged GSX-R rearsets from the first build have been kept in place and a wire held fuel filler clip added. With 6 months additional labour now complete since the bike’s misadventure Sander’s decision to give the bike a facelift rather than simply rebuild it has been rewarded with an immaculate result and racer finish that Mr Speed Blocks himself, Kenny Roberts, would surely be proud!