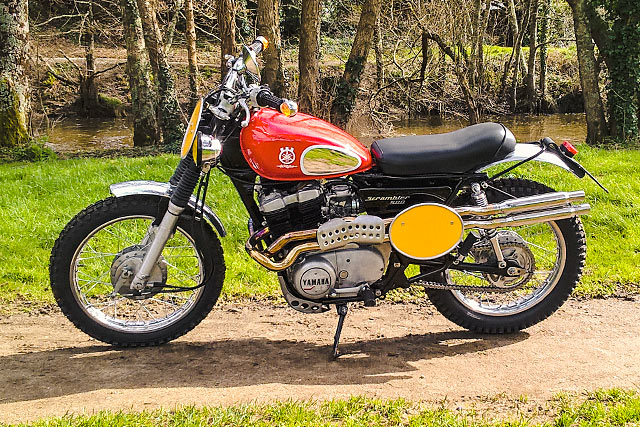 Vincent’s brief for his new custom bike was as quick as it was poetic. Leaning on the corner of his French bar, his hand-drawn sketch showing a classic early 70s scrambler was handed to Yann from BCKustoms with a smile, a handshake and a deposit. A true biker, 60-year-old Vincent looked back fondly on his memories from that time and had decided that he wanted to create an homage of sorts to the era, sans the prerequisite expense and maintenance involved with the real deal. It was increasingly looking like Yann’s collection of rusty Yamaha XS500 parts might come in handy after all. “The idea was to build a ‘new’ bike,” begins Yann. “New in the sense that it would soak up all the tears and scratches off-roading brings without too much stress for Vincent. We also wanted a create a race bike that was built for road use and not the opposite way around. Hence the choice of placing the headlight on one side. It’s not a road bike that has been made to look like a scrambler, but rather a scrambler that’s been made roadworthy while still being capable of racing in a field and, if requested, crossing a small river.” Yann’s old barn-find Yamaha XS500 parts, minus the engine, were sent off for sandblasting to ensure he had a clean base to start things off. Then he grabbed the Mash 400 tank off his own McQueen-inspired Scrambler project, after realising that its rounded design and vintage look would suit this new project perfectly. [superquote]“Hell, is recreating anything Steve McQueen did ever a bad idea?”[/superquote]

“Meanwhile Vincent, clearly addicted to Google Image searches, was sending me plenty of ideas he wanted me to integrate into the project’s design. He loves the old Husky red paint and yellow plates scheme and I begin to think that a little Steve McQueen might not be a bad idea for this build.” Hell, is recreating anything Steve McQueen did ever a bad idea? Next, a set of 18″ spoked wheels with some rebuilt Honda drum brakes, a homemade Bates-style seat and a bespoke 2-in-2 stainless exhaust system were added to the scrambler. An OEM XS500 front end was shaved of extraneous fixing points and secured alongside oval alloy number plates, a set of large chrome enduro vintage bars, alloy fenders and a rear ‘tomato’ brake light mounted on a soft licence plate holder. A Honda Shadow headlight – which has been tweaked inside to accept H4 bulbs – got a yellow wrap to send it back to the 70s. The wheels were fitted with a similarly retro set of tyres featuring a period-correct tread pattern. Vincent chose the indicators, which are an aftermarket BMW item. At first Yann didn’t think they’d suit, but he now admits that the end result is pretty good. And the fact that they are visible from both sides means it saves him the hassle of having to add two more lights to the rear of the bike. Next, a bash plate from a Honda 600 XLR was widened and added to the Yamaha’s more sensitive bits. “The engine was also fully restored,” notes Yann. “All the usual, worn-out parts were sorted and the carbs were cleaned and reconditioned, too. And when the cylinder head was re-surfaced, we modified the spark ports to ensure that the common issue of broken cylinder heads between the plug and exhaust port on these bikes doesn’t rear its head with this one.” Yann, sure the scrambler was good to go, kicked it over for the first time. With his ears ringing worse than the Hunchback of Notre Dame, Yann decided that there was in fact one last thing to be done on the Yamaha. “After the ringing subsided, I built a pair of mini BSA stainless mufflers, polished them and added them to the pipes.” We’re sure that Quasimodo, along with all the non-humpbacked patrons of Vincent’s bar, will be most pleased.