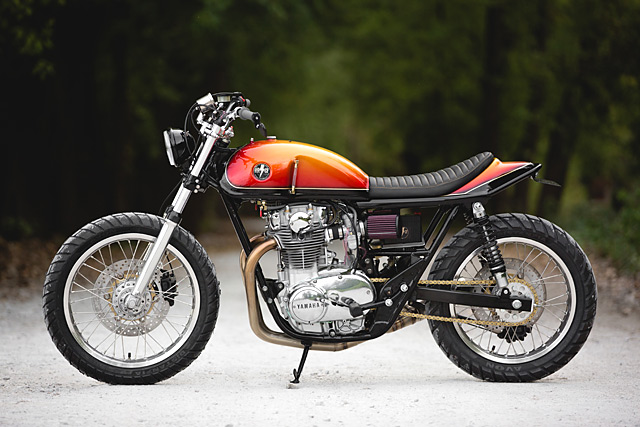 When the Yamaha engineers put pencil to paper and created the XS650 with its classic looking parallel twin they could never have imagined that so many decades later it would continue to be a cult classic. But when Heath Reed owner of River Rat Cycle Fab from Davenport Iowa was commissioned to build this 1977 example he didn’t want to simply run with the pack and do the standard modifications. Instead the brilliant fabricator spent hours in deep thought working out how he could create more than just another XS650 tracker. In the end he came up with a hybrid; a tracker with a touch of café racer, street fighter styling cues and a little inspiration from the greatest guitar ever made! With the design finalised Heath set about giving the ’77 XS a second birth that when finished would be known as “The Rattler”. To truly breathe new life into something old you have to strip it of everything and start with the skeleton and that’s exactly what Heath did. With the bare frame on the bench he removed all the unnecessary brackets and tabs and smoothed every surface. The factory rear subframe was removed and a new upper piece fabricated that kicks up in the rear as you would expect from a tracker. Many rely simply on the tail section of the seat to give this effect, but using the frames lines to lift the rear is the extra measure Heath goes to that makes his builds so good. For some real flat track authenticity the seat pan is a Woods Rotax item with a mix of tracker looks but far smoother lines than those designed for the Harley market. Adding a little luxury to the build is the beautiful raw stitching on the black leather and just the right amount of padding to find the balance between comfort and style. Looking for the right tank to use on the build Heath got talking to legend of the game Greg Hageman who had a Benelli tank that would be perfect for the Yamaha. The only problem was the top side was completely rusted out but that didn’t deter Heath who cut out the metal cancer, hammered and rolled a replacement panel and welded it in along with a custom filler neck. With the tins done it was over to Scott Takes of Underground Art Studios to lay down the paint and the result is one of the best colour schemes of the year. Black follows the lines of the frame for the perfect merger that is then broken up by one gold pinstripe allowing some of the black to seep through before exploding into a Gibson Les Paul-esque cherry starburst colour scheme that would keep the richest rocker satisfied. Scott added the River Rat Cycle Fabrication logos where the badges once had been and Heath finished the look with a fuel sight gauge. With a very clear purpose for how he wanted the engine to perform Heath built up a motor that increased overall horsepower but kept that classic twin torque for maximum acceleration out of the bends. The engine was completely torn down before the stock 653cc parallel twin was built back up to a smooth 700cc thanks to new pistons. The popular flat track Shell #1 cam has been fitted and to take full advantage all the corresponding headwork was done before screwing it down. With maximum low down torque in mind Heath designed and fabricated a 2 into 1 stepped exhaust system from stainless steel that looks just as good as it functions. Fuelling is taken care of by the ever popular Mikuni carbs breathing through a pair of tracker type K&N air filters. Heath has switched the Yamaha over to a modern ignition and charging system with the battery and wiring all sitting neatly in their own tray. With the engine done the suspension deserved an upgrade and the rear benefits from modern progressive rear shocks for maximum mechanical drive. The OEM forks remain in place but have been turned to remove the fender mounts and one sides caliper mounts before adding custom springs. The standard triple trees clamp the forks in place but have been neatly smoothed and rid of all the factory surplus. With the conversion to a single disc front Heath used a modern Tokico brake caliper with a drilled disc and replicated the same out back for far superior braking than anything offered in 1977. Polished hubs with spoke laced rims suit the tracker styling perfectly and Avon Distanzia rubber provides maximum grip on a variety of road surfaces and conditions. With the joy of his customers always in mind Heath has rubber mounted many components including the tank, footpegs, battery box and risers to reduce vibration and improve the riding experience. Renthal fatbars slot into the risers and give the riding position a true upright tracker stance with custom grips for maximum adhesion when twisting the throttle. A single Koso speedo is centre mounted and provides all the vital information with the ignition joining the clean and uncluttered front end. Everything else is kept relatively simple for a race looking bike that works on the street, a small single headlight, slim taillight and single bar mounted mirror keep the authorities happy. While the new levers, single switchblock and quick action throttle give all the functionality without any of the clutter. With the XS650 finished it’s easy to see why Heath and River Rat Cycle Fab are such a successful operation. Clean lines, incredible paint, clever fabrication and no area of steer, stop and go being left unattended to. The Rattler is now off to its new home where one very happy client is going to be shaking its tail in the Knoxville Tennessee countryside, listen up or you’re likely to get bitten.