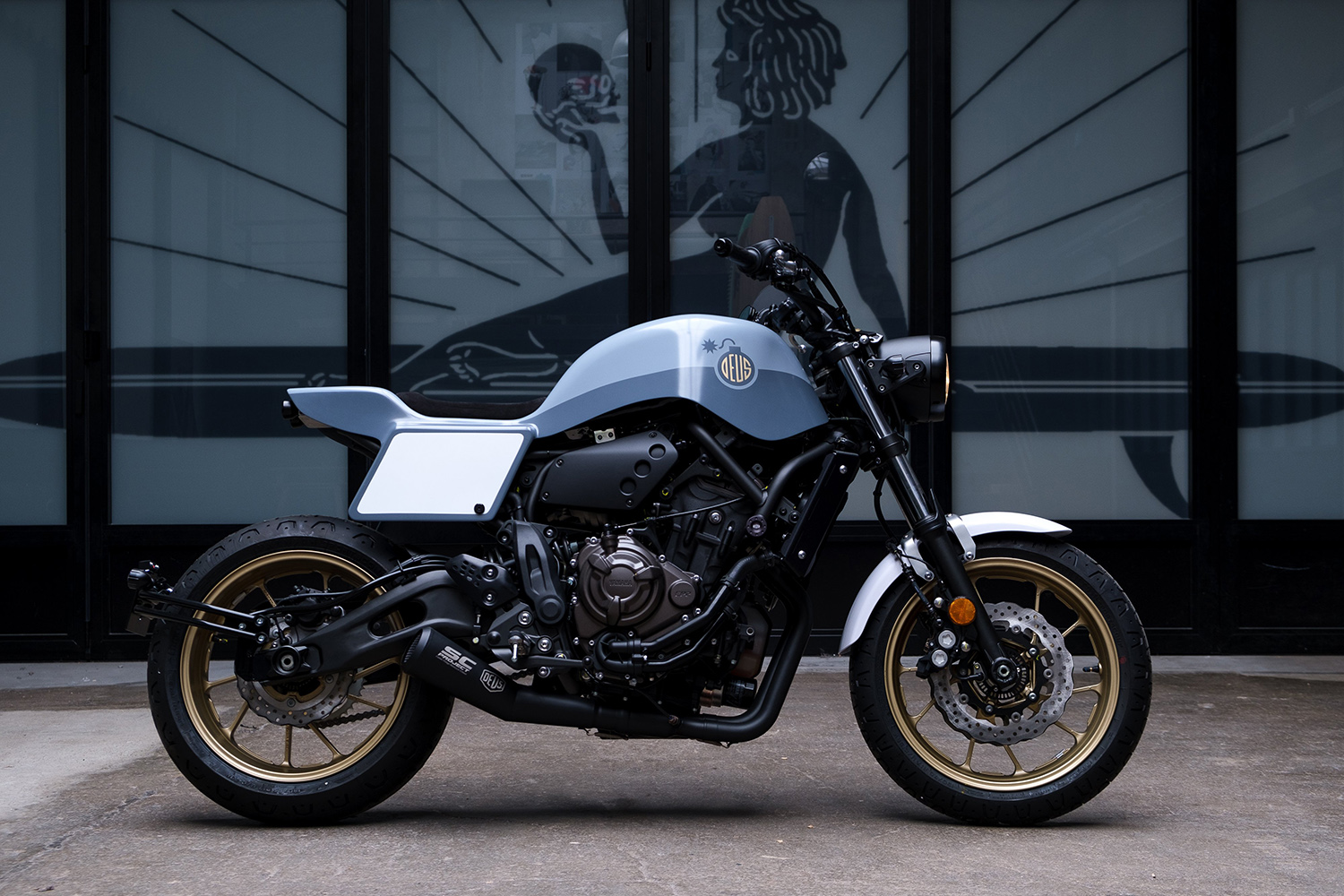 The phenomenon that is Deus Ex Machina is simply impossible to miss, a motorcycle lifestyle brand that has simply taken the world by storm. With Flagship locations on five continents, official stores in endless nations, and a range of apparel and accessories that simply seem to be everywhere; they have become synonymous with the custom bike culture. But don’t for a second think the bikes themselves aren’t front a centre, those silhouettes on their t-shirts belong to real bikes they’ve built. So, combining the company’s global force, their surf mad locations in Sydney and Biarritz, have joined forces to build a killer Yamaha XSR700 called ‘la Bombe’, the perfect weekend companion for when you’re not hitting the waves.

Making this cross hemisphere build that much easier is the fact that the head of motorcycle design at the original Deus location in Sydney, is Frenchman Jeremy Tagand. Rarely seen without a spanner in his hand and some grease on his elbows he’s equally at home working on classic motorcycles as he is in the world of modern materials and design techniques. Working with some very clever Australian company’s he put together the Deus Bombshell kit, a complete make-over for your Yamaha XSR700 or MT-07.

Having built the first Bombshell kit bike, based on an XSR out of carbon fibre, the second saw Deus collaborate with Young Jerks for an MT-07 build. So, to show off the kit to a European audience, that anyone can buy from Deus online, it made sense to team up with the lads at Deus Ex Machina Biarritz – The Tenement Of Tenacity. It was decided that a fibreglass version of the computer-designed body would be used, and unlike most kits available for the Yamaha’s you keep your stock fuel tank (no tiny tank and external pump required here).

To get things going it was over to Cam at Handcraft Fiberglass who got down to the messy work of playing with glass-reinforced plastic and resin. The result is a stunning monocoque piece that sits over the factory fuel tank and bolts down to the frame with a pair of billet machined brackets, without any cutting of the XSR required. It’s hard to think of any other major transformation to a modern motorcycle that can so easily be installed by anyone at home with a socket set and a couple of Allen wrenches.

“Next the monocoque was off to paint where the two-tone grey combo was skilfully sprayed by Marc at Sydney Custom Spray Painting- the perfect complement to the OEM gold on the wheels and bombshell logo.” The white front fender works perfectly as a contrast, joining forces with the number boards in a true tracker style. Seat options are plentiful with the kit, you can order leather or vinyl as a covering, and you only have to look at ‘la Bombe’ to see how neatly the rider’s pad slots into the bodywork.

From here you can go crazy with your own version, leave the rest of the bike stock, turbo the engine, or anything else in between. The middle road was chosen for this corner carver and to gain some extra ponies an exhaust from SC-Project was selected. The Conic “70s Style” is an off-the-shelf product from the company and was optioned in the matte black finish with an additional Deus logo on the end can. Euro 4 compliant it’s yet another part that doesn’t require you to cut the bike and with a 24month warranty, it adds to the attractive nature of the kit for owners who don’t fancy hacking up their new Yamaha.

“The finishing touches came courtesy of S2 concepts in France with their wrap-around number plate holder and indicator kit and Purpose Built Moto (Australia) with their orbital tail lights used in the under-seat twin tail light set-up.” The end product is a stunning custom motorcycle, assembled with just the tools you have at home, requiring no cutting of the frame and yet giving a genuine one-off vibe. Now in France, you can check out ‘la Bombe’ in the Deus Biarritz store, if the lads aren’t giving it a good canning on the coast road! With the fibreglass kit costing $2500 (AUS), if you fancy your own, head over to their online store to make an inquiry and it might be your Yamaha’s turn to wear the Deus Ex Machina logo.