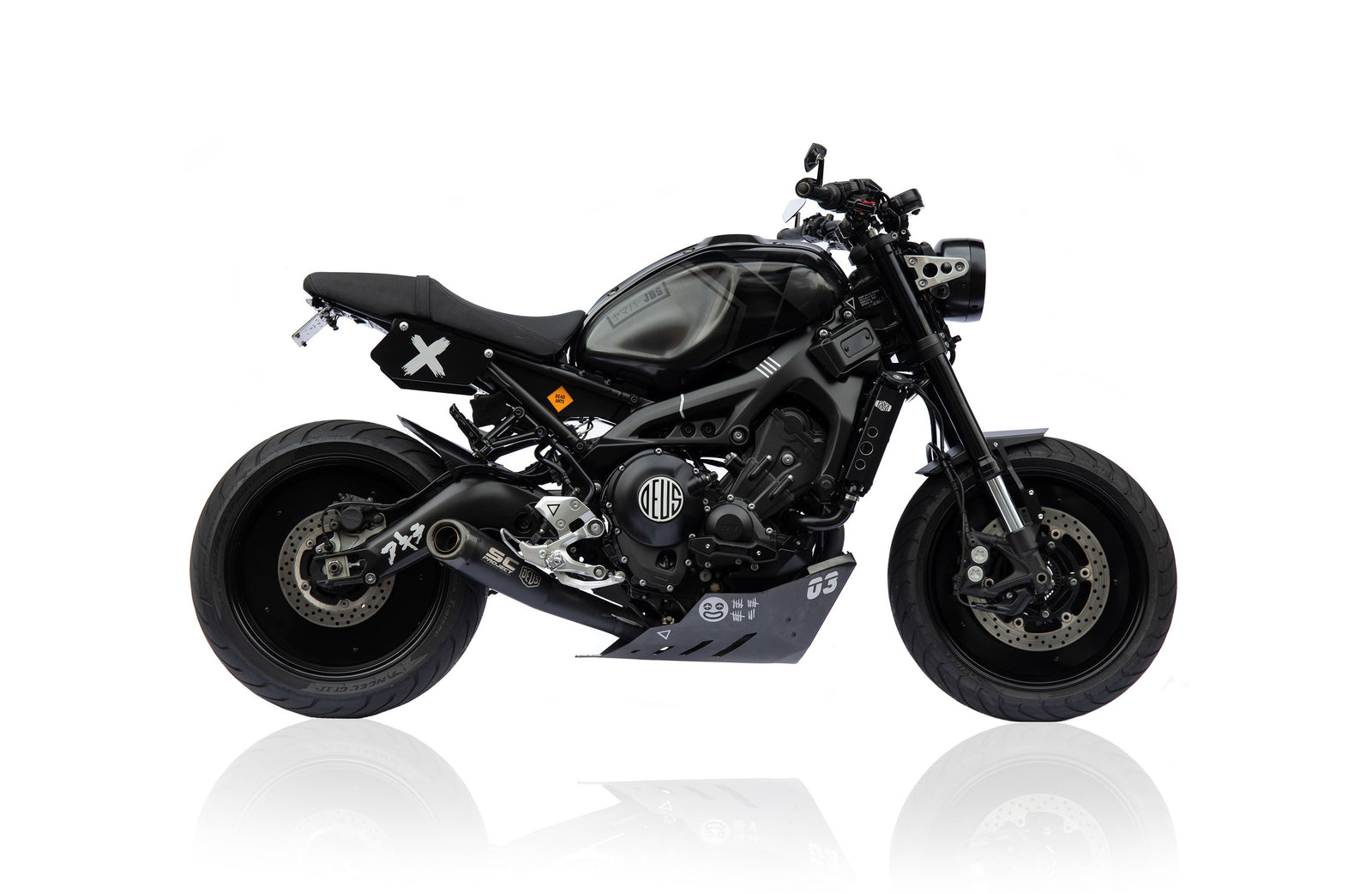 Sometimes it seems that you really can have too much of a good thing and that just might be the case with Yamaha’s stunning and incredibly popular sport heritage range of motorcycles. The line-up that includes motorcycles for all types of riders gives a retro vibe to these very modern machines, and there is even a range of special editions to pay homage to classic Yamaha’s like the two-stroke RD and the big XT single. But here’s the problem, the bikes look like a custom and do it well, only issue is with such sales success, you start to see your factory ‘custom’ everywhere and that sense of individualism is lost. So, for a very lucky friend of Deus Ex Machina, they built him a truly unique XSR900 that’s name and inspiration come from the iconic animated film, ‘Akira’.

Bikes like the XSR and its range of siblings have been extremely popular and with Yamaha rolling out the Yard Built Program and Faster Sons, they’re marketing team has ensured that the full range has been a sales success. It just goes to show what engaging with the riding community can really achieve. But the pick of the bunch for me is the XSR900, it looks amazing, is the perfect mix of sporty and comfortable, and that triple-cylinder, twin-cam, 890cc engine is a thrill a second on the road, providing all of the horsepower and torque you could desire in a street bike.

But with their popularity, the individualism is definitely gone and a friend (JB) of Deus’s chief designer Jeremy Tagand wanted a bike that took inspiration from his favourite cult film! “Akira follows the story of best friends Shōtarō Kaneda and Tetsuo Shima, the leaders of the vigilante bosozoku motorcycle gang the Capsules as they battle against both their rival gangs the Clowns, and the Government. Since its premiere in 1988, Akira has amassed a cult following for its incredible cyberpunk animation and gritty depiction of the socioeconomic effect of war and youthful rebellion. Set in dystopian Neo-Tokyo, a city plagued with corruption and motorcycle gang violence.”

The description became the brief, and a rendering of the finished bike was created with the help of artist Jeremy Lord, now the plan was set in stone, and the build could begin. Those solid wheels are a standout feature of the bike and radically transform its appearance in a way that even an aftermarket set could never achieve. But there isn’t exactly a bolt-on conversion, so to make it possible, Jeremy joined forces with Mario from Ricci Engineering. Together they designed and drew up the discs, which are then cut from alloy. A set of clamps to keep them in place are also laser cut before the whole lot was sent off for powder coat.

The right exhaust was vital on a build such as this, with both the look to blend with the theme and the sound to extract the most from the screaming triple, essential. If you’ve ever heard an MV Agusta Moto2 bike, then you know the master of making 3-cylinder engines sing are the folks at SC-Project. All blacked out, the system disappears into the background, until the muffler with its slick carbon tip is exposed under the footpegs and is finished out with custom Deus logos. Mechanical modifications weren’t a key part of the build, but the rest of the engine is dressed up with Deus covers and the same for the radiator.

Protecting that exhaust and continuing the visual transformation, is an aluminium skid plate from the Givi. Originally intended for the Tracer 900, the SC-Project exhaust meant that it wouldn’t fit, so Jeremy had to spend considerable time modifying the piece to make it work. Joining the party are some sleek side covers from Motodemic, that give a flat track number board appearance. To add to the dystopian vibe, products that had come from the Yard Built program were the perfect selection and first appeared on a machine called Monkeebeast.

The angular front fender gives a menacing frontal appearance, and neatly bolts on courtesy of the custom round bar mounts. Joining the party are matching items for the chain guard, rear hugger and speedo bracket. Now the visual transformation had one final step, and to ensure things were in safe hands, it was time “to send the paint work off to the wizard over at @sydneycustomspraypainting – Marc Houssenloge to paint the ghosted “X” and Japanese kanji on the tank and skid plate. Final details are the decals scattered around the bike which reference Akira and Neo-Tokyo.”

Obviously the cheap and chunky factory lighting would never suit, so the rear end is a combination of an S2 Concept tail light matched with Kellermann’s Rhombus indicators, while Motogadget mo.blaze discs sort out the front. Mo.view blade mirrors also from Motogadget are perched on the end of a set of Rizoma Conical handlebars, and a set of adjustable levers finishes out the build. “The final product is a dark, ominous, almost understated bike that Testuo Shima could be seen (or unseen) neutralising a few of the Clowns on, yet still make a hasty get-away should the 5-0 arrive.” And that places this XSR in a very different realm from absolute any of its stablemates.