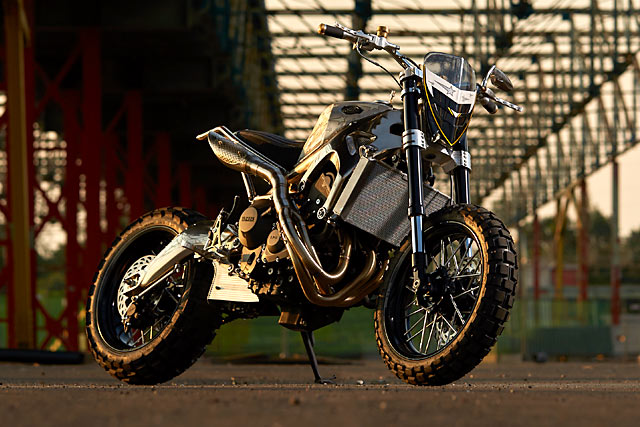 In many ways, Italy’s OMT Garage is the perfect nuclear racing family. Father Gaetano Troiano started the shop in 1978. Mother Silvana handles the media. And sons Marco and Mario are now pushing things into the 21st century and beyond with their love of racing and customisation. That makes 2018 the shop’s 40th anniversary. And what better way to celebrate that than with a star-studded line-up. Here’s their SnowQuake-winning ‘Stardust’ Yamaha XSR900 scrambler. Since their last Pipeburn feature bike, the Troiano family have both landed official seller status with Italian heroes Moto Guzzi and kicked of a Racing School. Essentially a public flat track class, they were lucky enough to land Moto3 racer Tony Arbolinio as one of their first students. He, along with his lucky (and now very self-conscious) classmates hit the dirt twice a week to practice, swap tips and improve their skills. As the very first Japanese bike that the brothers had worked on, the XSR900 was more than a little privileged. Especially considering its previous life as a press and test riding bike for Yamaha Italy. Damn those irresponsible, ham-fisted moto journos. Yamaha’s only request was that they build a custom scrambler – but one that was pushing the boundaries and clearly different from all those that had come before. A fearful set of instructions for us mere mortals, but quite a fitting challenge for the House of Troiano. And the bike’s rather flashy, Hollywood name? Originally it was a nickname given to the Yamaha after a long run of late summer nights spent transforming the thing from factory to fantastic. But as of a few week’s ago the name has taken on a new meaning after the bike, with the very talented racer Marco on board, took frosty gold at the Deus-organised 2018 SnowQuake event in Northern Italy. Stardust or stardom?

With 20/20 hindsight, the bike had been perfectly prepped to win in these treacherous conditions as Marco tells us with a little too much glee that he went to town and ripped out the entirety of the bike’s electronic governors, including the ABS, ATC and the ride-by-wire system. “Now, it’s only for hard riders,” he laughs. You can almost hear those Japanese engineers gasping from here. [superquote]“Marco tells us with a little too much glee that he went to town and ripped out the entirety of the bike’s electronic governors.”[/superquote]

As with most of the OMT builds, Marco has exercised his considerable fabrication skills by hand making all of the bike’s key custom components out of aluminium, including the gas tank, rear fender, seat, battery box, ‘bars and radiator. This very same radiator takes the somewhat ‘barndoor-ish’ size and placement of the original item and completely owns it. It’s amazing what in-your-face heavy metal can do to your perceptions.

Other drool-inducing componentry includes the Milano-made Borrani tubeless wheels, a bespoke stainless exhaust that apparently sounds like the starting grid at the MotoGP, a seat in Alcantara and leather and the top-shelf Continental TKC 80 tyres. The build process started with the boys stripping the Yamaha back to its empty frame and wheels so that the rear fender and tail section combo could be sized and proportioned perfectly. Next an aluminium sheet was artfully smacked up to form the new gas tank; an achievement that is all-the-more impressive when you consider the relocation of the in-tank fuel pump and the space required for the bike’s air filters. Then the frame was cleaned up, sandblasted and polished with a final coating to prevent against rust. With its life destined to be spent on surfaces where a twin front disc set-up would be about as useful as a white crayon, Marco and Mario lost one of the factory discs and added a handy Brembo caliper. Less is more, as they say. The rear sticks with the standard Nissin unit. The seat was designed to integrate into the rear’s new tail and with the new tank up front. Put simply, it’s the quintessential urban scrambler look; small and minimal.

Mario’s face grimaces when he describes the inordinate amount of hard work involved to hide all of the bike’s electrics. And with the amount of redundancy in the loom after the Troiano’s went nuts on the bike’s electronics, Mario makes it sound like most of the ‘hiding’ was actually more like ‘starting the wiring again from scratch.’ Clearly, many hours were spent getting things as clean and tidy as possible.

“I very much like the new style of the bike,” says Marco in closing. “This is because I feel that it’s a perfect combination of the classic scrambler style mixed with some new ideas for the future of the genre.” We couldn’t agree more.