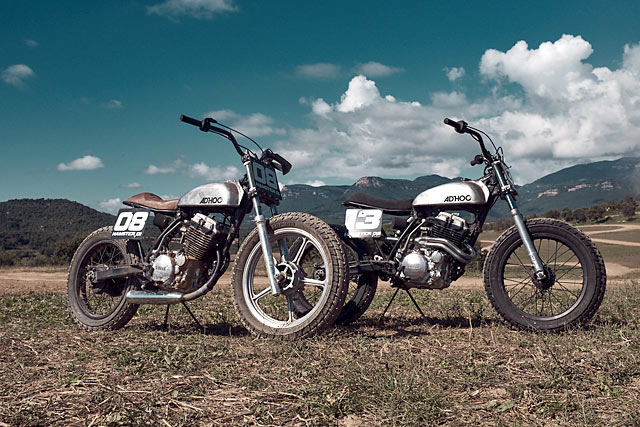 C’mon. Admit it. You’ve toyed with the idea of buying a beater bike, customising it and entering a race at your local flat track. But it’s an odds-on bet that, like most of us, you haven’t put your money – or the dirt – where your mouth is. Unlike us lazy buggers, one Spanish custom shop had the get up and go to make things happen. And as if to prove a point, they’ve gone and done it twice. Please welcome the ‘Hamster 01’ and ‘Hamster 02’ twin Yamaha XT350 trackers from Barcelona’s very own AdHoc. 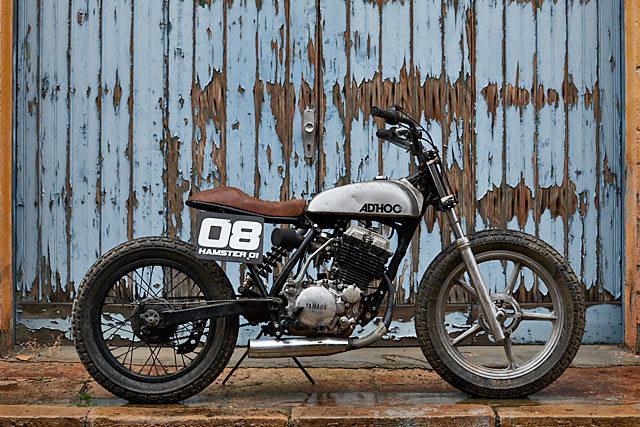 Shop owner Dave’s small talk let’s us know that not only has the placehad a Christmas makeover, but there’s also some cool stuff in the pipeline for 2019. “We are just finishing off a very interesting collaboration build that will be shot soon. We also have three new bikes in the pipeline and we’ll be kicking off our second G-Class Mercedes customisation.” Now, we’re not sure what kind of bike a ‘Mercedes’ is, but we have it on good authority it’s German and expensive… 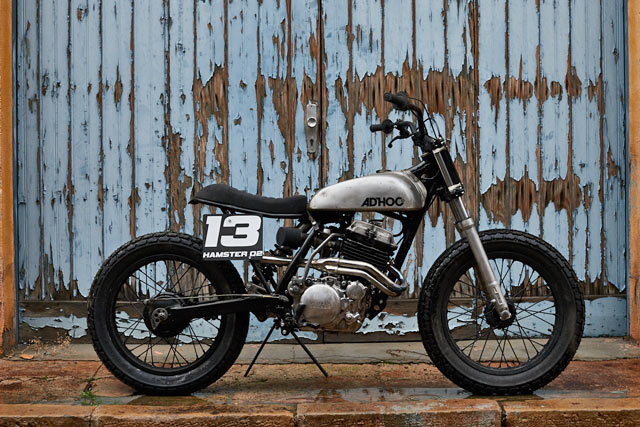 And why the ‘Hamster’ nickname, I hear you ask? Of course, you don’t call your flat tracker a hamster without a solid reason, and AdHoc’s David Gonzalez had a pretty good one. “When you think about it, flat trackers are a lot like a hamster on a wheel.” You have to admit it, he’s got a point – although I’ve never seen a hamster lose it on a corner and burst into flames. At least, not yet. 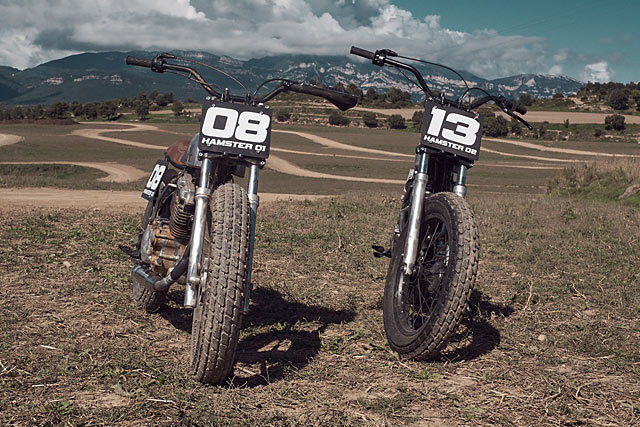 Purchased through the local classifieds from an owner barely two kilometres from the workshop, the AdHoc team were surprised to find that the ‘86 Yamaha XT350 was exactly as advertised. Moreover, sitting right next to it was another identical frame and engine from exactly the same year, with all the necessary paperwork to make the construction of a second bike a doddle. Now, if that ain’t a special message from the gods of sliding sideways, what is?

Dave shuts us down as we launch into a question asking him what his inspiration was. Clearly driven by a desire to get out there and amongst it, chin-scratching creativity was eschewed for the shortest possible line between the workshop and the starting grid. “I wanted the simplest possible construction; fast and effective,” he says, matter-of-factly. Sounds like someone’s been bitten by the bug to me.

[superquote]“Chin-scratching creativity was eschewed for the shortest possible line between the workshop and the starting grid.”[/superquote] 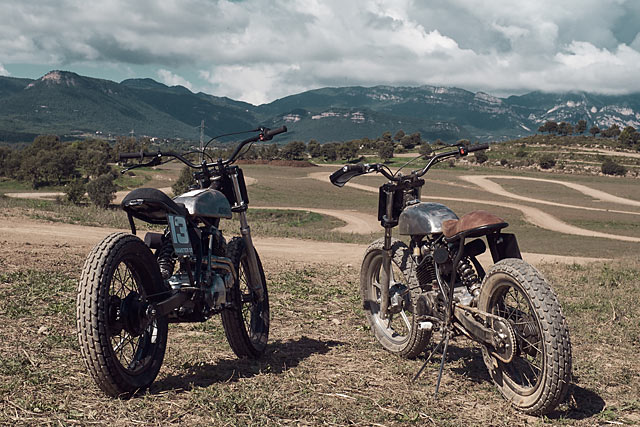 Unsurprisingly, the build process was just as perfunctory. “We started by stripping all the excess plastics, along with the seat and tank. We used what we could from the factory’s rear frame and then removed the filter box supports and any other parts that weren’t going to be needed. For the forks, one bike has the originals and the second uses a set from a Sling CB250.” The rolls are provided from spoked 18 inch rims, with the exception of the cast front 19-incher that comes from a good ol’ 1100 Virago. 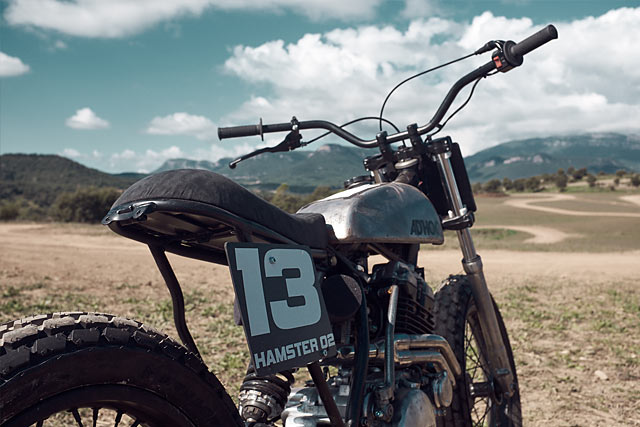 With both engines barely clocking up enough mileage to be classed as used, David called it done with an obligatory oil and filter change – both for the black stuff and a nice foam unit for the carbies to make sure they didn’t get any gravel reflux while ingesting at ten tenths. A quick rattle can tan later, and they were blacked out and ready to boogie. 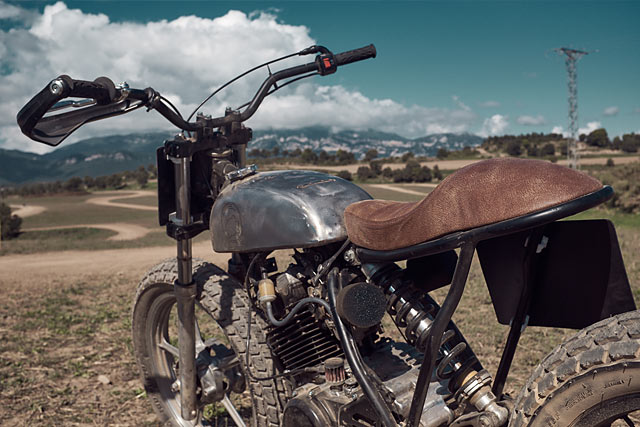 “I was trying out one of the spare tanks I had in the workshop and got a second big surprise; it fit perfectly.” And you thought we were joking about the whole divine intervention thing, didn’t you? “I used the time I would have spent cutting and welding everything by just buying a second, matching tank.” That, and fitting and the freshly delivered double set of Dunlop K180s, a tyre released in 2018 by the 130-year-old manufacturer to service “the growing street tracker, scrambler, and custom bike market.” Glad to hear someone’s listening. 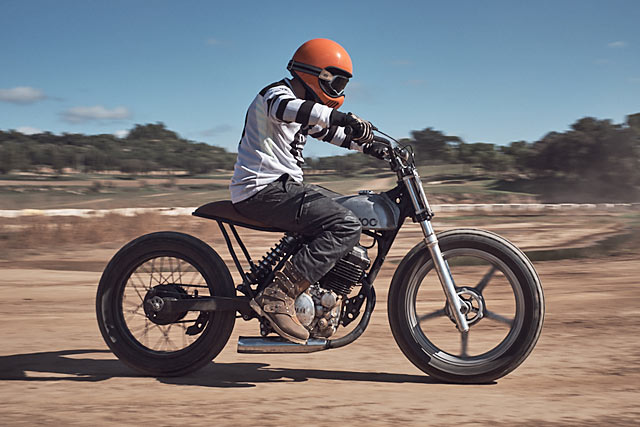 The last touches before things got dirty were the seat and the number boards. Growing a little tired of doing everything twice, Dave threw a bit of variation into the mix by changing up the upholstery. “One is a brown cowhide while the other is a black Alcantara,” he notes. Needless to say, the racing numbers weren’t identical, either. Hamster one became number 08, while the all-black second rodent became lucky number 13.

Now that he’s made us feel thoroughly lazy and a little jealous too, we asked David for some final thoughts on the project. “It was a very simple construction and the fact that we were doing it twice made the process much easier than we thought. With 20/20 hindsight, what I like the most about the pair is the fact that I now have two bikes available; one for me to race and one to invite a friend to race with me.” Smart, huh? We’re expecting to receive the call any day now. 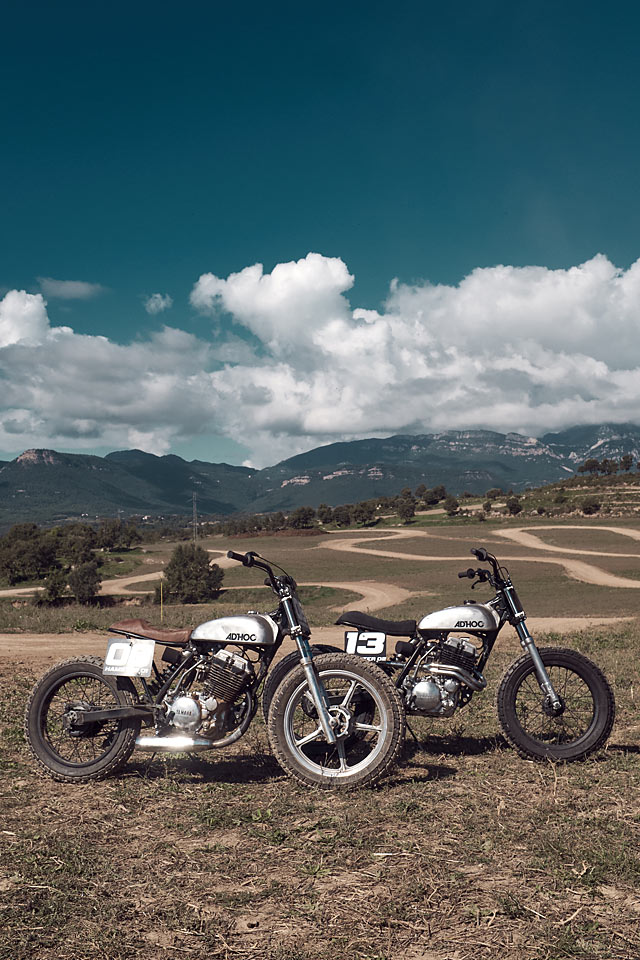