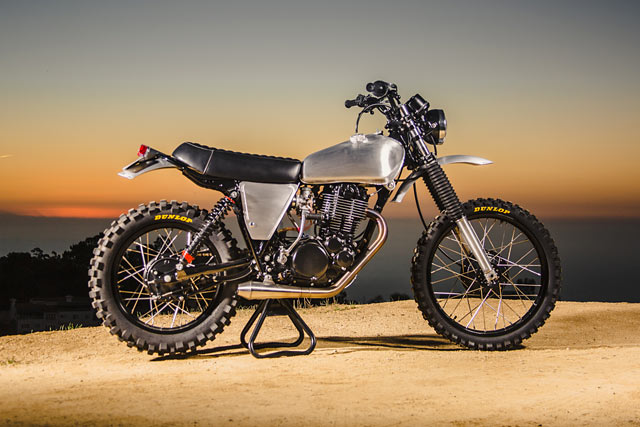 How do you haul ass in Hollywood? You go full metal jacket on a breathtaking Urban Enduro that’ll cruise with Bentleys on the Boulevard, before heading to the hills where the stars live to rip it up on the rough and rugged roads. But first you need to pick the platform and with iconic status and Paris-Dakar pedigree they don’t come any much than the Yamaha XT500. LA’s Russell Stratton of Ride Custom picked up this example and set to work building RC01, the latest star to emerge from Tinseltown. 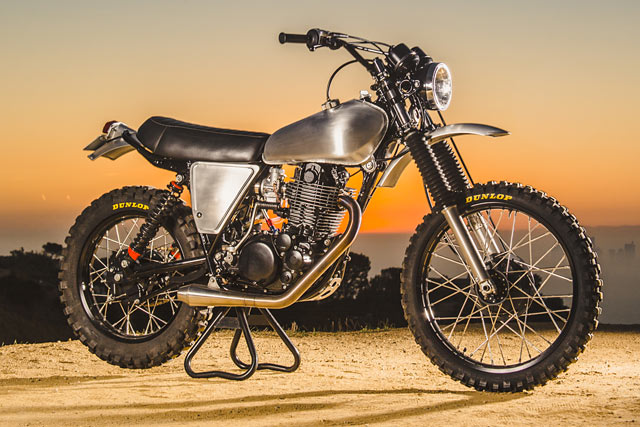 The 1978 XT came to the casting couch at a later age than most, and like many donor models had lived a hard life. The XT500 is often called the farmer’s daughter and just like the starlet who comes to town looking to make it big, she’s slender, capable and willing to do anything. But this particular Yamaha wasn’t new to town, now in a midlife crisis, it had been living all along in Los Angeles. No, it wasn’t rusting under a tree, buried in a barn or awaiting rescue in a salvage yard. This now pretty thing had been through much worse, she’d been owned by a hipster. 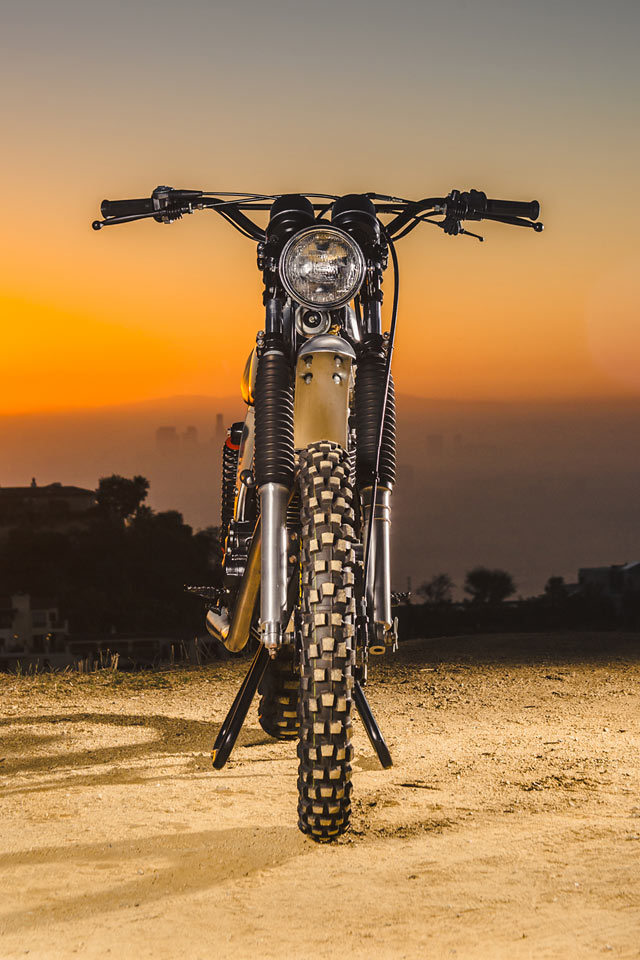 Residing in the city’s Echo Park (think indie music, vegan tacos and terrible hair) it’s just lucky Russell came along when he did. The poor thing was probably lubricated with tea tree oil. But all jokes aside, a much earlier owner had fitted up some favourite pieces of the period, Answer handlebars, a SuperTrapp high pipe and Mikuni VM carb, so this would be the XT’s second time under the knife. And at Ride Custom, Russell was clear on the plan, “The aim was to knock the plastic off it and accentuate the aluminium gas tank with all aluminium brush finished bodywork.”

[superquote]“It’s lucky Russell came along when he did. The poor thing was probably lubricated with tea tree oil.”[/superquote] 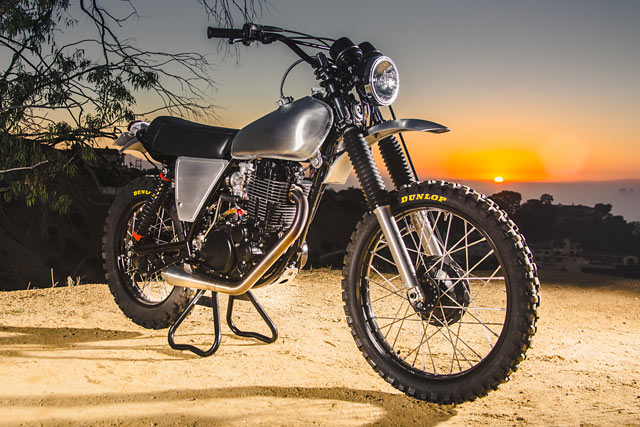 But rather than just bolt on those bits, this would be a full overhaul and the XT500 was torn down so that the single sat on the bench and the frame was into fab. The first order of business was to cut the back-end off the frame and re-hoop the rear to shorten its overall length. Then with grinder in hand old tabs and mounts that were surplus to requirements were ground down and the whole thing smoothed out. Finally mounts for all the new pieces to come were finished off and the chassis was ready for the alloy make over. 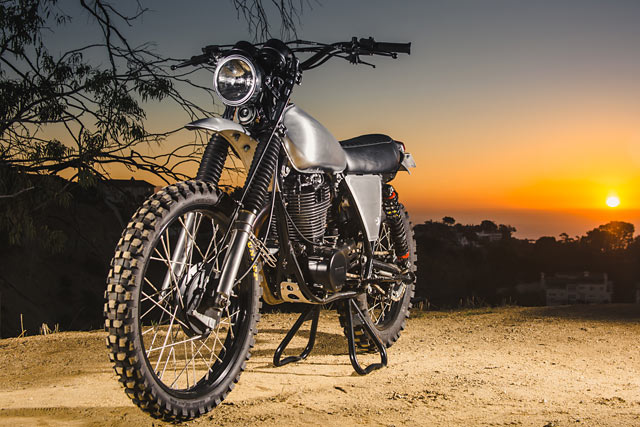 The first item to catch your eye is the stunning aluminium gas tank, with the brushed finish and classic filler getting everyone nostalgic. Not wanting to leave the sides vacant Russell set about making a set of one-off covers, bead rolled and beautifully crafted with a fit and finish that is of factory quality. The front and rear fenders are off the shelf items with both modified to match the new design of the XT; in particular the rear has been massaged to match the arc of the tyre. 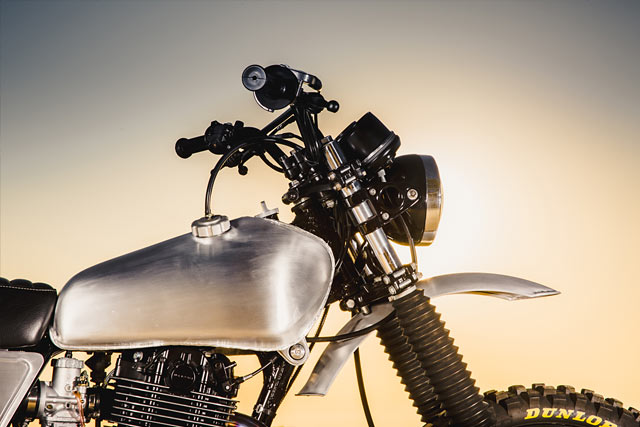 It’s this focus on the little details that starts to set the Ride Custom machine apart from the pack. And wanting to take it further the snow plough like skid plate has been thrown aside with a form-fitting, handcrafted piece now doing twice the job with an aesthetic to please. The tail light unit is donated from another project in the shop, a rare ’71 Yankee Z500, and looks perfect on the XT. While the classic headlight mounted on short ears gives the period look with a slick finish! 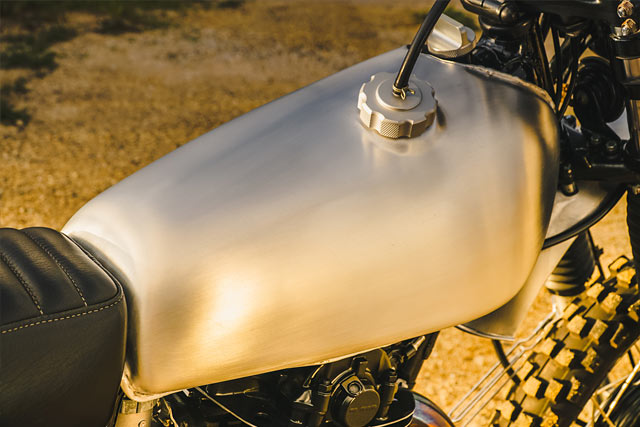 Now Russell had to turn the bike into a rolling chassis and knowing his Hollywood environment well, didn’t cut corners in making sure it had all the fruit! A new set of tubes gets the front forks underway and they’ve been totally rebuilt with Race Tech Gold Valves and Progressive Springs. These work perfectly in unison with the rear swingarm that now supports Progressive Suspension 13 Series Shocks, for precise and predictable handling on any surface. While blacked out Sun Rims laced with Buchanan’s spokes get wrapped up in Dunlop D606 rubber ready to shred. 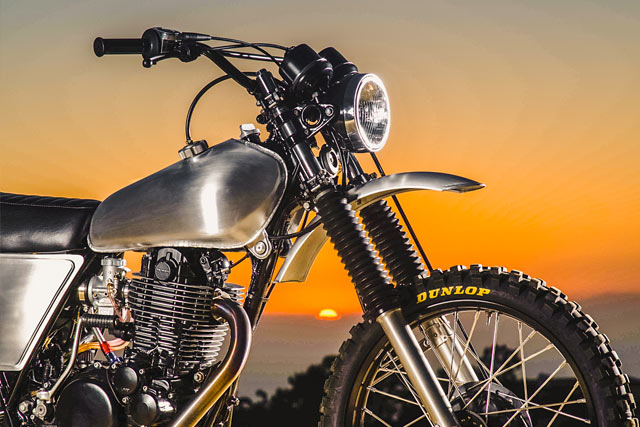 Providing the punch is the legendary Japanese single that came to rule the world, the 499cc, 2 valve that has the versatility for any situation. Having been given the once over and a full health check the block and covers were painted PJ1 satin black before being bolted back into the frame. “The exhaust system was a mashup of a head pipe from Giga Bike and a Cone Engineering muffler with a custom internal baffle to keep the db’s down while circulating the mean streets of Los Angeles,” Russell smiles. With a new pre-jetted Mikuni VM36 to feed the fuel and quality fittings used throughout. 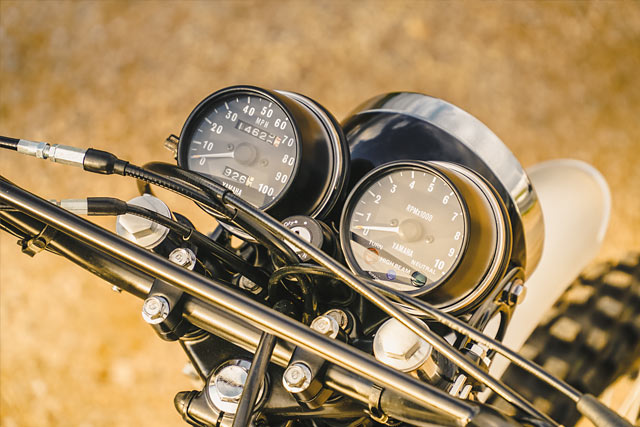 As a nod to the past the old Answer handlebars were retained, all be it with a new coat of colour; with all parts that aren’t alloy getting fresh powder or paint. No stranger to our pages Ginger at New Church Moto took care of the seat, starting with a fibreglass pan and stitching up black Relicate leather with silver thread to cleverly tie in with the brushed alloy. To finish RC01 Russell bolts on the final piece with pride, “The original California blue plate that the bike has worn since new.” And just like that, it’s TMZ cameras at the ready as a long time local makes it big with a Ride Custom reboot! 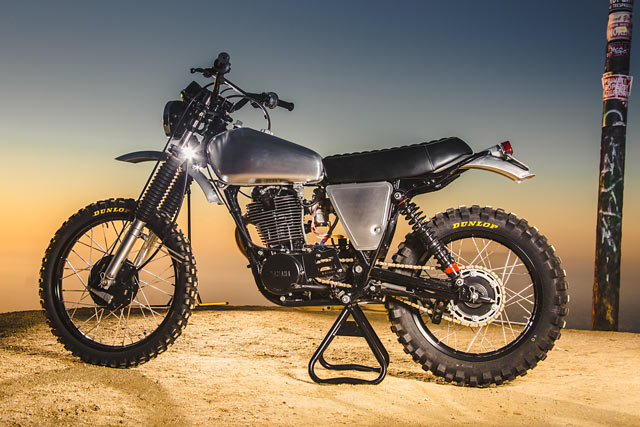